MANILA, Philippines — Rodrigo Duterte enters the penultimate year of his presidency with supermajorities intact in Congress, incentivized police and military forces, a Supreme Court populated by his appointees, and an opposition that’s lively but scattered.

Yet among analysts, there’s a gnawing sense that as his administration’s response to the COVID-19 pandemic continues to falter and dissent grows against the Anti-Terrorism Act and the ABS-CBN shutdown, the President’s teflon surface is getting chipped and the public, including his army of followers, is giving him a second look that’s less than benign.

“There’s a ripple now,” said Jan Robert Go, assistant professor in political science at the University of the Philippines, who noted the unusual vigor of street demonstrations in support of ABS-CBN despite the threat of the novel coronavirus.

“I’m not expecting an Edsa Revolution out of this, but I’m expecting people will realize that once their lives are affected by their leader, they have to do something,” Go told the Inquirer in a phone interview.

He said that if left unchecked, the public health crisis, compounded by outrage over the antiterror law and the ABS-CBN closure, could become Duterte’s Mamasapano or “Hello Garci” moment — a reference to the controversies that rocked the presidencies of Benigno “Noynoy” Aquino III and Gloria Macapagal-Arroyo, respectively.

Political economist Calixto Chikiamco, president of the Foundation for Economic Freedom, said it was too early to tell whether the civil restiveness unleashed by the COVID-19 lockdown would “lead to something bigger.”

But he predicted that Duterte’s legacy would be overshadowed by the pandemic because of its long-lasting impact, especially on the jobless multitudes.

It certainly hasn’t helped that the President’s officials are doing terribly in controlling the spread of the coronavirus, Chikiamco told the Inquirer by phone.

“The [government] data is quite murky and unreliable. In terms of testing, tracing and isolation, they are falling short. It’s the private sector that has stepped up. So that leaves much to be desired, especially if you compare us with countries like Thailand,” he said.

Earl Parreño, author of the unauthorized Duterte biography, “Beyond Will and Power,” said the public health crisis magnified one of the President’s biggest flaws: “He was never a unifier. He has always resorted to othering.”

“This pandemic calls for unity. This requires all political forces to come together. Yet there is no message of unity from the President,” Parreño said in a phone interview, recalling how Duterte, in his freshman year, divided society between the previous administration’s “dilawan” (yellow) forces and his own “DDS,” a rebranding of the Davao death squads.

Nevertheless, Go noted, as a leader better known for burning than building bridges, Duterte has shown remarkable instincts at keeping a grip on power.

This was how Go read the lay of the land: At the outset, Duterte shunned the embrace of traditional political parties, even his own Partido Demokratiko Pilipino-Lakas ng Bayan (PDP-Laban) that served as his vehicle to Malacañang.

Upon establishing his rule, Duterte left the party to its own devices, and now Congress is led by non-PDP-Laban members. Still, both the House of Representatives and the Senate are firmly under his sway, even as the latter maintains a veneer of independence while the former flagrantly bows to his will. 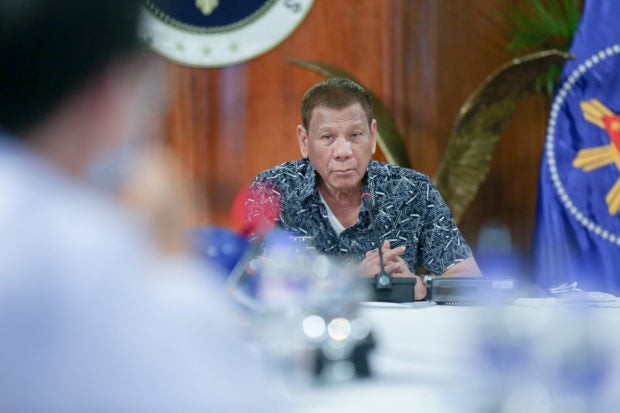 Neither is the Supreme Court free of the President’s influence. He has 11 appointees in the 15-member tribunal; by 2022, it will be 13.

Then there’s Duterte’s most important ally: the military-police establishment.

In his first few months, he visited camps nationwide. He raised the pay of uniformed personnel. He named retired generals to important posts like the environment, social welfare and interior departments.

It’s clear that Duterte knows his history, Go said, recalling how the military was instrumental in popular uprisings that ousted Ferdinand Marcos in 1986 and Joseph Estrada in 2001.

Duterte joined forces, too, with anyone who had an ax to grind with Noynoy Aquino.

Go cited a widely circulated April 2017 picture of Duterte sitting at a table flanked by Arroyo and Estrada, with former first lady Imelda Marcos in the foreground.

“That was a very, very powerful photo. It reflected the current situation: All that were ‘bad’ in the past are all at one table with the President,” Go said, adding that it revealed Mr. Duterte’s cunning and determination to ensure his survival.

But Albay Rep. Joey Salceda, chair of the House ways and means committee, argued that the President “has expressly used his political capital rather sparingly.”

On contentious issues, he “has been careful” and stays above the fray, Salceda said in a text message.

“As soon as the public prefers a different approach to governance, they will let us know in the polls,” he said, noting how the President’s anointed candidates dominated the 2019 midterms.

Parreño said that while his instincts served Duterte well as he consolidated power, things might have changed after four years.

“If you look at the undercurrents, there’s a tension that’s affecting his political rule — the unmet expectations and promises,” Parreño said.

The President’s early promises include wiping out the illegal drug trade, improving mass transport and creating jobs through the “Build, Build, Build (BBB)” infrastructure program — none of which has been fulfilled, Parreño said.

Chikiamco noted that BBB had not taken off and, because of the pandemic, might never get off the ground. As of 2020, only two of the original 75 big-ticket items have been completed despite Chinese loans.

The war on drugs could not qualify as a success, either, he said. “We still have stories of rampant drug use. To date, we don’t know of any drug lord or kingpin who has been incarcerated. What we’ve heard is the massive death toll of EJKs (extrajudicial killings).”

On the promise of efficient public transport, Parreño lamented: “Look at the MRT (Metro Rail Transit). After four years, it’s the same situation. Others would say it worsened.”

To be fair, Chikiamco said Duterte was not without accomplishments, among them the Bangsamoro Organic Law that sprang from a peace deal with Moro rebels, and rice import liberalization, which curbed inflation.

The President, too, has successfully pushed social legislation, such as universal health care and free college education, and strengthened the Social Security System, and extended maternity leaves.

But ultimately, according to Chikiamco, such benefits cannot offset Duterte’s failure to deliver on his defining pledge four years ago—that “change is coming.”

“We haven’t seen anything revolutionary or systemic from his government in terms of both the economy and the politics. It’s still politics as usual,” Chikiamco said. “The fact is, if we have to judge him on what he has promised, the President has failed.”