“5 female celebrity friendships that are the ultimate goals | Push Pins”

“5 female celebrity friendships that are the ultimate goals | Push Pins” 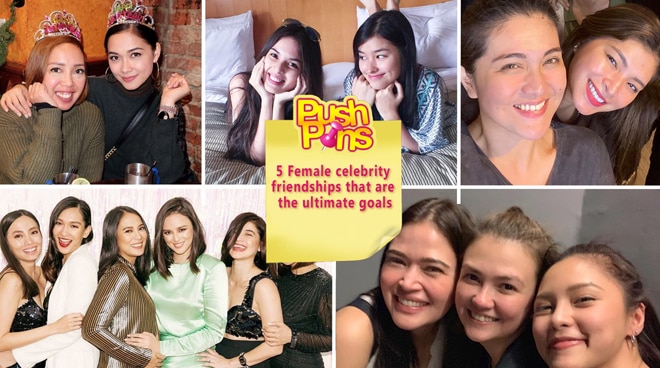 These female celebs are feeling blessed to have real friends by their side. Let us get to know them and be inspired by their beautiful friendships.

These female celebs are feeling blessed to have real friends by their side. Let us get to know them and be inspired by their beautiful friendships.

Among the most famous girl squads in showbiz are Angelica Panganiban, Bela Padilla, and Kim Chiu—collectively known as AngBeKi.

The AngBeKi group was unexpectedly formed when Kim and Bela gatecrashed an event where Angelica was in attendance in 2017, and they have gotten close since then.

A #friendshipgoal indeed, in 2019,
they got matching tattoos—nothing but a solid, minuscule circle apt to signify their friendship.

Liza Soberano and Michelle Vito prove that even amid the shining lights and the allure of showbiz, you can still come across someone you can call as your true friend.

Launched in the same Star Magic batch in 2013, their friendship has flourished and grew even more as time passed by.

Now, despite their busy schedule, they make sure to stay connected by spending big moments together.

They also go to concerts together, celebrate each other’s birthdays, and are just always there for each other.

The two actresses have treated each other as family ever since then.

Last December 2019, Angel rushed to her friend’s side to help out and take care of her children when Dimples’ husband Boyet had to be rushed to the hospital.

Meanwhile, Neil Arce, Angel’s fiancé, revealed that Dimples helped him in getting Angel’s ring size when he was planning to propose.

In a 2019 interview with Boy Abunda, Dimples shared that she’s going to be the matron of honor in the couple’s wedding.

Kakai Bautista and Maja Salvador are known to be very close friends, standing by each other through tough times.

With their friendship that stands the test of time, Kakai became not just Maja’s best friend but also a part of her family.

In fact, like real families, it has been their tradition to celebrate New Year together.

Be it at their home or someplace else, it doesn’t matter to them as long as they spend it together.

Stylish, sophisticated, and successful—these are the words best fit to describe the country’s sought-after girl squad dubbed as the “It Girls.”

Composed of Anne Curtis, Georgina Wilson, Isabelle Daza, Solenn Heussaff, Liz Uy, and Bea Soriano Dee, the It Girls have been making waves on the lifestyle and entertainment scene for many years now.

Together, these girls shine and thrive in their respective careers and personal lives.

They are living proof that real friends do not compete but rather lift each other up so they can grow together.

Learn more about these squad goals in this video:

Do you agree that these female celebs are the ultimate #FriendshipGoals?