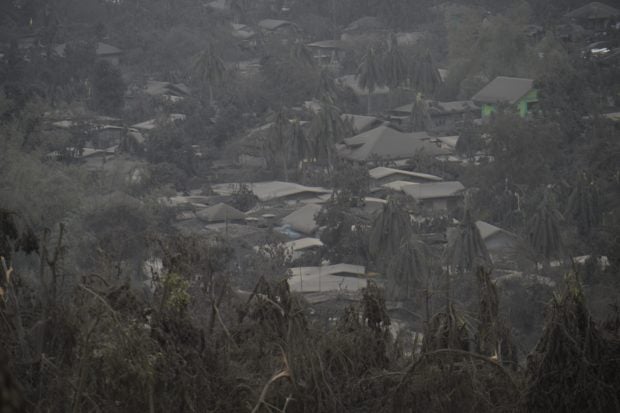 A bird’s eye view of roofs of houses covered with mud, as Taal volcano erupts in Laurel town, Batangas province south of Manila on January 15, 2020. Photo by Ted ALJIBE / AFP

Mayor Webster Letargo from Gumaca town in Quezon province said their group has decided to help the throng of evacuees from several affected towns of Batangas province now being attended by the municipal government of Alfonso, Cavite.

He said Alfonso Mayor Randy Salamat belongs to their group of municipal and city mayors who became friends during the seminar training course at the University of the Philippines – National College for Public Administration and Governance before they assumed office after their election last year.

“When we learned that Mayor Salamat was taking care of evacuees, the group members immediately contacted each other and mapped out plans to also help the refugees,” Letargo said.

“We also intend to bring toys for the kids to help them forget the tragedy,” he said.

Letargo went to Alfonso Wednesday (Jan. 15) to bring the donations from the local government and people of Gumaca.

He said the group members would also bring the donations from their respective constituents.