MANILA, Philippines — Mandaluyong Regional Trial Court Branch 212 has denied the petition of motorcycle ride-hailing firm Angkas, which sought a permanent injunction against the government’s implementation of revised guidelines for a pilot test run of motorcycle taxis.

In a four-page order, Judge Rizalino Capco-Umali dismissed Angkas’ petition to make permanent the writ of preliminary injunction on the implementation of the pilot test due to lack of merit.

A pilot test run of motorcycle taxis was enforced by the interagency technical working group of the Department of Transportation (DOTr).

“Since the Petitioner’s application for issuance of injunctive writ involves prayer to enjoin the enforcement of Section 10 of Revised General Guidelines for the Pilot Implementation of Motorcycle Taxis, which is also the same action being sought in the main case of injunction, the court is mindful that as much as possible avoid issuing writ which would effectively dispose of the main case without trial and/or due process,” read the order dated January 10 but released to the media Wednesday, January 15.

“Wherefore premises considered, the petitioner’s application for temporary restraining order and or writ of preliminary injunction is hereby denied for lack of merit,” it added.

To recall, the Mandaluyong court granted Angkas’ petition to issue a 72-hour temporary restraining order (TRO) on the implementation of the government’s cap on the number of motorcycle taxis permitted to participate in the pilot run.

This caused Angkas to decrease its number of riders from 27,000 to 10,000 to accommodate other riders from other ride-hailing firms –Move-It and JoyRide Philippines, which also joined the ongoing pilot test run.

On January 6, Angkas filed the petition urging the Mandaluyong court to issue a permanent injunction after the 72-hour TRO has lapsed. 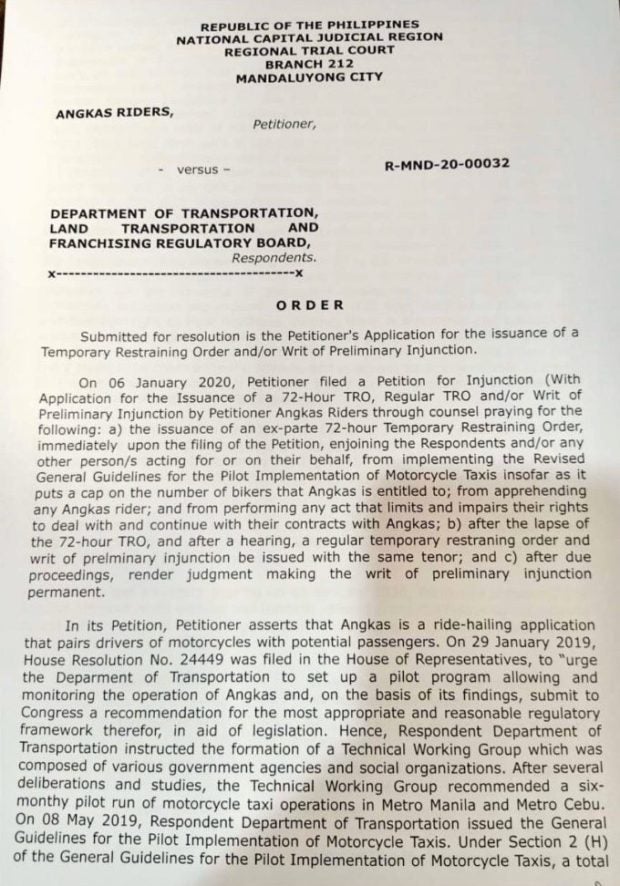 This photo shows a copy of Mandaluyong Regional Trial Court Branch 212’s decision on Angkas petition for a permanent injunction on the implementation of revised guidelines for the pilot test run of motorcycle taxis. /DOTr Viber group