Another tropical depression spotted as ‘Pepito’ batters parts of Luzon

Another tropical depression spotted as ‘Pepito’ batters parts of Luzon 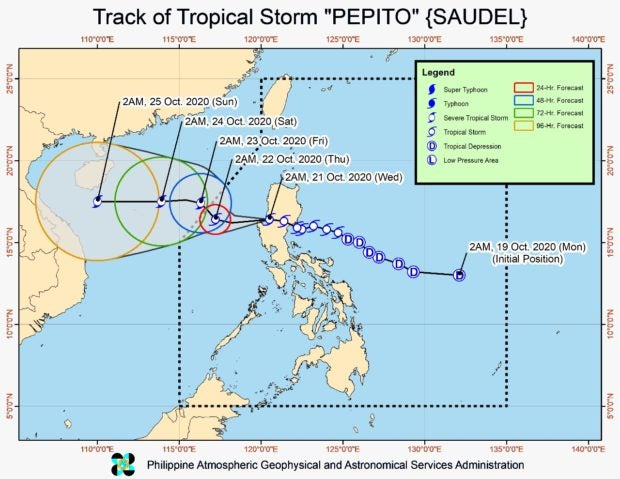 MANILA, Philippines — Tropical Cyclone Wind Signals (TCWS) are still raised in parts of Luzon on Wednesday due to tropical storm Pepito, as the Philippine Atmospheric, Geophysical and Astronomical Services Administration (Pagasa) monitors a new tropical depression outside the Philippine area of responsibility.

The center of Pepito was last spotted 40 kilometers north-northwest of Dagupan City, Pangasinan. It is packing maximum sustained winds of 75 kilometers per hour near the center and gustiness of up to 115 kph, and is moving west northwestward at 30 kph, according to the severe weather bulletin issued by Pagasa at 5 a.m.

According to Pagasa, “Pepito” is forecast to gradually intensify over the West Philippine Sea and may reach the severe tropical storm category by Thursday afternoon or evening.

“’Pepito‘ is forecast to move generally westward over the West Philippine Sea today, before slowing down and turning northwestward tomorrow. It is forecast to exit the Philippine Area of Responsibility tomorrow morning or afternoon,” it added.

On the forecast track, “Pepito” will accelerate and turn westward beginning Friday towards the central portion of Vietnam.

Meanwhile, light to moderate with at times heavy rains will be experienced over Metro Manila and the rest of Luzon. Pagasa warned that flooding and rain-induced landslides may occur during heavy or prolonged rainfall especially in areas that are highly or very highly susceptible to these hazards.

The weather bureau added that rough to very rough seas (2.5 to 5.5 m) will be experienced over the areas where TCWS and gale warning are in effect, particularly over the entire seaboards of Northern and Central Luzon, the seaboard of northern Quezon including Polillo Islands, and the western seaboards of Batangas, Occidental Mindoro (including Lubang Islands), and Palawan (including Calamian and Kalayaan Islands). Sea travel is risky over these areas, especially for those using small seacraft.

“Those with small seacrafts are advised to take precautionary measures when venturing out to sea. Inexperienced mariners should avoid navigating in these conditions,” Pagasa said.