‘Are people to be left to die?’ Vaccine pleas fill UN summit

‘Are people to be left to die?’ Vaccine pleas fill UN summit

JOHANNESBURG — If the United Nations was created from the ashes of World War II, what will be born from the global crisis of COVID-19?

Many world leaders at this week’s virtual U.N. summit hope it will be a vaccine made available and affordable to all countries, rich and poor. But with the U.S., China, and Russia opting out of a collaborative effort to develop and distribute a vaccine, and some rich nations striking deals with pharmaceutical companies to secure millions of potential doses, the U.N. pleas are plentiful but likely in vain.

“Are people to be left to die?” Honduran President Juan Orlando Hernández, a COVID-19 survivor, said of the uncertain way forward. 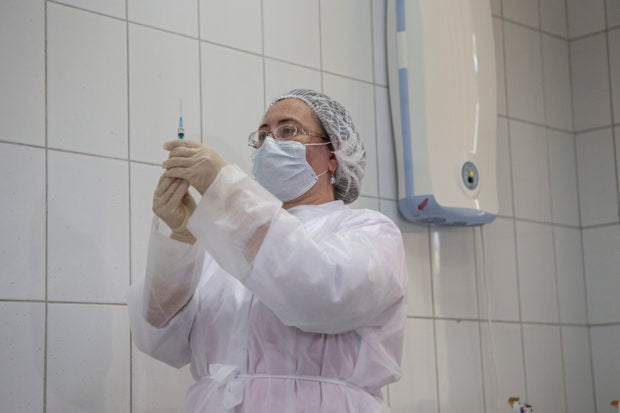 In this Tuesday, Sept. 15, 2020, file photo, a Russian medical worker prepares a shot of Russia’s experimental Sputnik V coronavirus vaccine for its use in Moscow, Russia. Many world leaders at this week’s virtual U.N. summit hope it will be a vaccine made available and affordable to all countries, rich and poor. But with the U.S., China, and Russia opting out of a collaborative effort to develop and distribute a vaccine, and some rich nations striking deals with pharmaceutical companies to secure millions of potential doses, the U.N. pleas are plentiful but likely in vain. (AP Photo/Alexander Zemlianichenko Jr, File)

More than 150 countries have joined COVAX, in which richer countries agree to buy into potential vaccines and help finance access for poorer ones. But the absence of Washington, Beijing, and Moscow means the response to a health crisis unlike any other in the U.N.’s 75 years is short of truly being global. Instead, the three powers have made vague pledges of sharing any vaccine they develop, likely after helping their own citizens first.

This week’s U.N. gathering could serve as a wake-up call, said Gayle Smith, president of the ONE Campaign, a nonprofit fighting preventable disease that’s developing scorecards to measure how the world’s most powerful nations are contributing to vaccine equity.

“It’s not enough for only some G20 countries to realize that an equitable vaccine is the key to ending this virus and reopening the global economy,” she said.

With weeks remaining before a deadline for countries to join COVAX, which is co-led by the U.N.’s World Health Organization, many heads of state are using the U.N. meeting as a high-profile chance to wheedle, persuade, and even shame.

Ghana’s president, Nana Akufo-Addo, pointed out the illusory nature of borders and wealth: “The virus has taught us that we are all at risk, and there is no special protection for the rich or a particular class.”

The president of the COVID-free Pacific island nation of Palau, Tommy Remengesau Jr., warned against selfishness: “Vaccine hoarding will harm us all.”

And Rwanda’s president, Paul Kagame, appealed to the universal desire for a return to normal: “Ensuring equitable access to vaccines, therapeutics and diagnostics will speed up the end of the pandemic for everyone.”

Just two days into nearly 200 speeches by world leaders, it was clear the urgent need for a vaccine would be mentioned by almost everyone. Considering the mind-popping challenges ahead, that’s no surprise.

“We’ve never dealt with a situation where 7.8 billion people in the world are needing a vaccine at almost the same time,” John Nkengasong, head of the Africa Centers for Disease Control and Prevention, said this month.

That has led to difficult questions: Who will get vaccine doses first? Who is making private deals to get them? This week’s speeches make clear that such questions have existential meaning.

The vaccine quest must not be a “purely mercantile act,” Iraq said. Nor “an issue of competition,” Turkey said.

“We must take the politics out of the vaccine,” Kazakhstan said. “We need true globalization of compassion,” Slovakia said.

The Dominican Republic deployed all-caps in a statement: “WE DEMAND this vaccine be available to all human beings on the planet.” More gently, Mozambique warned that “nationalism and isolationism in the face of a pandemic are, as far as we are concerned, a prescription for failure.”

No matter their reputation at home or on the global stage, leaders are finding a shred of common ground as the world nears a staggering 1 million confirmed deaths from the pandemic.

“The COVID-19 vaccine must be considered a global public good. Let us be clear on this,” said Rodrigo Duterte, president of the Philippines.

U.N. Secretary-General Antonio Guterres kicked off the General Assembly by declaring in an interview with the U.N.’s media arm: “To think that we can preserve the rich people, and let the poor people suffer, is a stupid mistake.”

It’s not clear if the world leaders’ remarks, delivered not in a diplomatic scrum at U.N. headquarters but in videos recorded from national capitals, will make a difference. Health experts, activists, and others anxiously watching the issue raised a collective eyebrow.

“It’s important we continue to be making these speeches, but ultimately, speeches alone won’t have an effect if there are no real measures put in place to make sure poor countries, and within them the poorest of poor, have access” to the vaccine, said Tendai Mafuma with the South Africa-based social justice group Section 27. It’s part of a coalition pressing to make medicines more affordable and accessible.

South Africa, along with many African countries, knows the deadly consequences of having to wait. Health experts say 12 million Africans died during the decade it took for affordable HIV drugs to reach the continent.

Mafuma’s countryman Shabir Madhi, lead researcher on a clinical trial in South Africa of the vaccine that Oxford University is developing with pharmaceutical company AstraZeneca, was a bit more optimistic. That most of the world’s richest countries have joined COVAX “is promising,” he said.

But whether this week’s impassioned speeches at the U.N. will make any difference, Madhi said, is still “difficult to tell.”