As some nations open, UK to quarantine arrivals for 2 weeks

As some nations open, UK to quarantine arrivals for 2 weeks 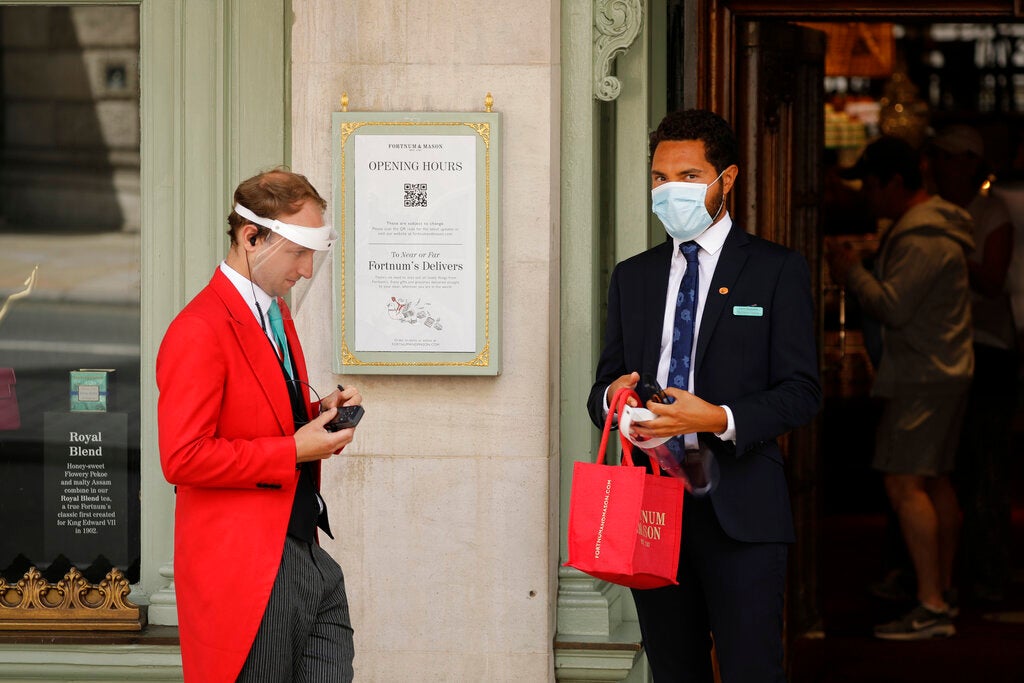 A doorman wearing a face shield to protect from coronavirus stands with a colleague at the main entrance of the Fortnum & Mason department store in the Piccadilly area of central London on Friday. (AP)

LONDON — People arriving in the U.K. next month will have to quarantine themselves for 14 days and could face an unlimited fine if they fail to comply, the British government announced Friday.

The quarantine plan has sparked confusion and criticism from airlines, airports and lockdown-weary Britons wondering whether they will get to take a vacation abroad this summer.

Britain did not close its borders during the worst of the country’s coronavirus outbreak, which has been linked to more than 36,000 deaths in the U.K. It is introducing its quarantine just as many other European countries are starting to open up again.

Home Secretary Priti Patel said the rules will take effect June 8 and will apply to arrivals from all countries except Ireland, which has a longstanding free-movement agreement with the U.K. Ireland is expected to announce similar measures for people arriving there.

Patel said that as transmission of the virus within the U.K. slows, the quarantine will help prevent imported cases and stop a “devastating” second wave of the virus.

There will be exemptions for truckers and freight workers, front-line medics and seasonal agricultural laborers.

Britons returning from overseas will also have to stay home and avoid mixing with others for 14 days under the measures, which will be reviewed every three weeks.

That is bad news for those hoping for a foreign summer holiday. Patel told a news conference that the government advice remained “very clear: nothing but essential travel” outside the country,

Arriving passengers will have to provide contact details and will be checked on regularly during the two weeks, the government said. They will also be “encouraged” to download a contact-tracing app that authorities are developing — if the glitch-filled app is ever put into use.

There has been confusion about the U.K. policy, after the government initially said it would not apply to people arriving from France. That prompted a rebuke from the European Union, which wants a coordinated policy across the 27-nation bloc.

Britain later said France would not be exempt.

Airlines have warned that the British move could hobble their efforts to rebuild a business devastated by pandemic-related travel restrictions.

Tim Alderslade, chief executive of trade body Airlines U.K., said a blanket quarantine was “just about the worst thing government could do if their aim is to restart the economy.”

Many European nations shut their borders in March as the pandemic took hold, and are now easing those restrictions.

Greece’s long-awaited tourist season will begin on June 15 with the opening of seasonal hotels and the arrival of the first foreign visitors, while international flights will begin heading directly for holiday destinations from July 1. Arriving passengers won’t be routinely screened for the virus but could be subject to sample testing.

Some countries’ plans to reopen to foreign visitors are spurring national and regional tensions as the summer tourist season approaches.

Italy, the onetime epicenter of Europe’s pandemic, is opening to European travel on June 3, the same date that it is allowing Italians to move outside their regions for pleasure. But some regions are taking precautions to ensure that the sudden reopening doesn’t create new infection clusters. Sardinia’s governor has suggested he might require visitors to the island to certify they had tested negative for the virus within the past week, or submit to a test on arrival.

The Tuscany regional government says on its website that any visitor from abroad or another Italian region must undergo quarantine for 14 days. It’s unknown if Tuscany, which fills with British and German tourists in summer, will revise that rule as June 3 approaches.

France says it may quarantine people arriving from an area “where the virus is circulating,” but it has not published a list of targeted areas. The French presidency said those coming from EU countries, from Britain and from the passport-free Schengen area will be exempted.

Cyprus plans to open up June 9 to commercial flights from a short list of countries with low COVID-19 infection rates, including Greece, Germany and Norway. The list will be expanded to several more countries on June 20.

Some European regions and tour operators have called for “tourism corridors” between areas with low rates of the coronavirus. Britain has said it is considering the idea, but Italy has condemned it, fearing it will exclude the country, which has seen more than 32,000 COVID-19 deaths.

US notifies UN of withdrawal from World Health Organization