Brussels, Belgium — Belgian Foreign Minister Sophie Wilmes, who was caretaker prime minister during the first wave of the coronavirus, has been admitted to intensive care, officials said Thursday.

The 45-year-old tested positive for COVID-19 last week and had been self-isolating, but her condition worsened and on Wednesday night she was admitted to a Brussels hospital. 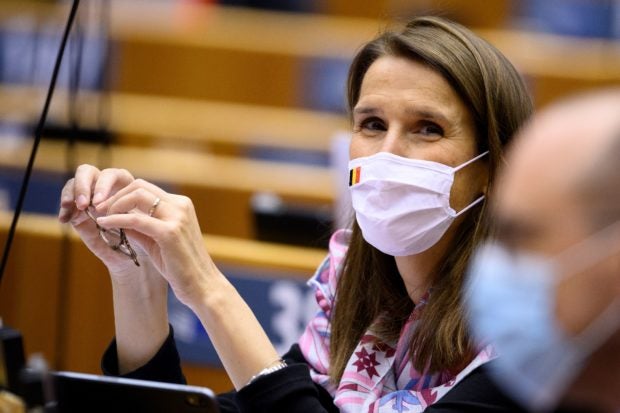 (FILES) In this file photo taken on October 02, 2020, Foreign Affairs Minister Sophie Wilmes is seen during a plenary session of the Belgian federal chamber, held at the European Parliament, with the debate and vote following the government declaration of the new federal government, on October 2, 2020, in Brussels. – Belgian Foreign Minister Sophie Wilmes, who was caretaker prime minister during the first wave of the coronavirus, has been admitted to intensive care, officials said on October 22, 2020. The 45-year-old tested positive for Covid-19 last week and had been self-isolating, but her condition worsened and on October 21, and she was admitted to a Brussels hospital. (Photo by Christophe LICOPPE / Belga / AFP) / Belgium OUT

“She is conscious and she can communicate,” her spokeswoman said, confirming that Wilmes was receiving intensive care. A source in her office said her condition was “stable.”

Prime Minister Alexander de Croo, who succeeded Wilmes on October 1, wished her a “speedy recovery” on his Twitter account.

“No one is immune from this dangerous virus. Together as one, we will beat Covid-19!” he said.

The European Union is reviewing its policy for face-to-face meetings after a Brussels summit last week was disrupted by three leaders being forced to go into self-isolation after aides were infected.

Belgium, meanwhile, is experiencing one of the worst second waves of the epidemic in the world, and with 10,539 deaths in a country of 11.5 million people, one of the deadliest outbreaks per capita.

The number of confirmed infections has doubled in a month to 253,386, and there are 3,274 patients currently in hospital, despite a renewed partial lockdown that has seen pubs and restaurants close.

Government ministers and scientists will hold a new emergency meeting on Friday and are expected to announce still tighter measures to stem the spread of the virus.