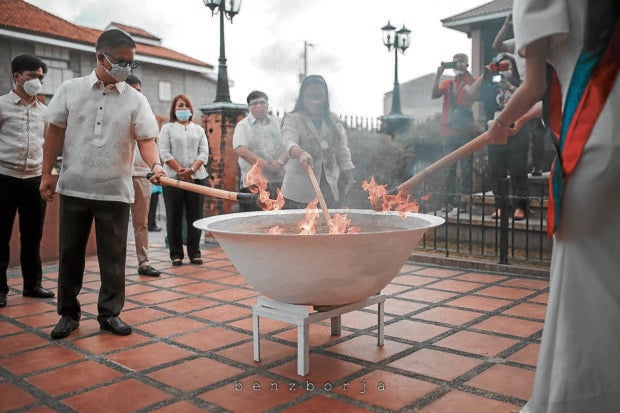 PROPER CEREMONY Officials of the city of Biñan in Laguna province lead the burning of old and tattered Philippine flags in a funeral-like ceremony honoring the country’s symbol during the National Heroes’ Day commemoration on Monday. —BENZ BORJA/CONTRIBUTOR

Officials in the city of Biñan in Laguna province burned some 20 worn-out Philippine flags in a solemn rite that followed traditions for disposing of the national symbol on Monday.

Not too many local governments were known to be practicing flag cremation, except for Imus City in Cavite province and the City of San Fernando in Pampanga province, which only began doing so about two years ago.

Like Imus, which claims to be the country’s “flag capital,” Biñan traces its place in history through local hero, Ambrosio Rianzares Bautista.

Bautista, born in Biñan in 1830, was a lawyer-propagandist who waved the flag in Kawit, Cavite, when Gen. Emilio Aguinaldo declared the Philippine independence on June 12, 1898.

Even the Cultural Center of the Philippines only began practicing flag-burning since 2014.

Section 14 of Republic Act No. 8491, or the Flag and Heraldic Code of the Philippines, states that worn-out flags must “not be thrown away.”

“It shall be solemnly burned to avoid misuse or desecration,” reads the law enacted in 1998.

“But as a common practice [in Biñan], we used to bring over the [old] flags to the Boy Scouts of the Philippines in Los Baños (Laguna). They were the ones who burned them,” said Bryan Jayson Borja, culture, history, arts and tourism officer of Biñan.

When the city government decided to do it on its own, Borja said people reacted to the burning and thought it was “wrong or illegal.”

“We wanted, too, to introduce the law to those who did not know, or did not understand [it],” Borja said in a phone interview.

Following the tradition, the torn and faded flags from city government offices and schools were burned in a large cauldron, while a woman dressed in Filipiniana stood next to it. The ashes were collected in an urn and buried in a funeral-like ceremony.

Borja said retiring a flag by cremation was like giving it the final “salute” and was only fitting to hold it on National Heroes’ Day.They buried the urn in the old City Hall grounds and placed a small tile for a headstone to mark the first flags the city had interred.

In his message, Mayor Walfredo Dimaguila Jr. said the city wanted to honor the flags, which were a symbol of all freedom-loving heroes.

He said it also intended to pay tribute to health-care workers during the pandemic as modern-day fighters.