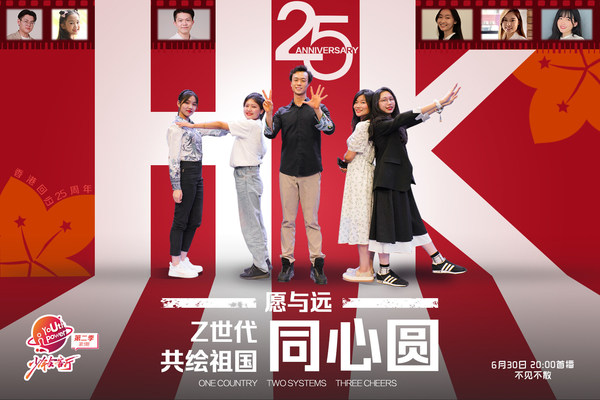 For the episode, Youth Power invited Gen Zers from the mainland, Hong Kong, Macao and Taiwan to celebrate the 25th anniversary of Hong Kong’s return to China, offering their suggestions for the future of Hong Kong and the Guangdong-Hong Kong-Macao Greater Bay Area.

The Gen Zers who took part discussed childhood memories and identity and cultural differences relating to Hong Kong and the mainland. In doing so they found that their cultural roots are strong, meaning young people can be proud bearers of their cultural memories.

According to those who too part, young people from Hong Kong and the mainland not only share the same languages, but also have similar interests. For example, Cantonese songs, TV programs, Hong Kong stars and celebrities and other elements of Hong Kong pop culture are a common memory and love of Gen Zers. Gen Zers in Hong Kong and Macao also enjoy variety shows from the mainland.

Those in the program said they hoped people from both Hong Kong and the mainland would cherish their shared history and culture.

In addition to cultural bonds, Gen Zers in the Youth Power episode discussed the role that patriotic education should play in helping teenagers to form their attitudes and values.

“I think patriotic education is important,” Huang Ernuo, raised in Hong Kong, said. Huang now works for Tsinghua University in Beijing after having graduated there. “If it doesn’t happen in the education system, what would happen? Where do you get your information from? Media, which can easily be influenced by business and money.”

Zhong Yutong, a graduate of Fudan University in Shanghai, talked of the essence of an education that cultivates a sense of identity and belonging. “(You need to know) where you came from, where your ancestors came from, where you’re heading and what some of the values you want to hold to are.”

Many young people from Hong Kong and Macao, including some of the Youth Power guests, have gained new perspectives by studying, working or setting up a business on the mainland.

Song Wei, a doctoral student at China University of Political Science and Law in Beijing, said that as a Macao citizen she is proud of the Hong Kong-Zhuhai-Macao Bridge.

Those who appeared on the program, having witnessed how Hong Kong and the mainland are linked economically, culturally, with personal exchanges and in other ways, said they looked forward to a more in-depth emotional bonding in the future.

Chen Simo, of Taiwan, said that when she was a child she had to travel through Hong Kong whenever she traveled to and from the mainland. Direct travel between the mainland and Taiwan was officially established in 2009, making two-way, comprehensive three direct links across the Taiwan Straits a reality.

Ye Xueying, 21, of Hong Kong, who has just graduated from Wuhan University with an undergraduate degree in Chinese classics, talked of her future plans, saying: “I’ll just stick to my study of the Chinese classics. I hope people can realize history is a very important part, a collective memory for everyone This is how we get to build our sense of belonging.”

Addressing Hong Kong people, she said: “I hope you know that antagonism does not solve anything, and hatred and hostility are not what we should pass on. I hope we can put aside (our differences) and be able to love each other. Please allow me the honor to introduce to you this wonderful place named Hong Kong. It’s small, but it’s big enough for dreams and love.”

Li Wanrong, born in Hong Kong in 1997, said: “Hong Kong Special Administrative Region is only 25 years old, the same as me. We still have a lot of opportunities. We will have time to grow up. We will also face difficulties and challenges.”

Li, a graduate of the Chinese University of Hong Kong, hopes to become a pediatrician. No matter what challenges or difficulties we face, the important thing is to remember why we set out on our individual journey and why we would like to press on, she said.

Those who appeared on the program said Hong Kong and the mainland have always been closely linked, despite the various tests they have faced. All those who took part, from Hong Kong, Macao, Taiwan and the mainland, said they would work together to create a bright future. They hope that the next 25 years will be prosperous and smooth for Hong Kong and the Greater Bay Area, they said.