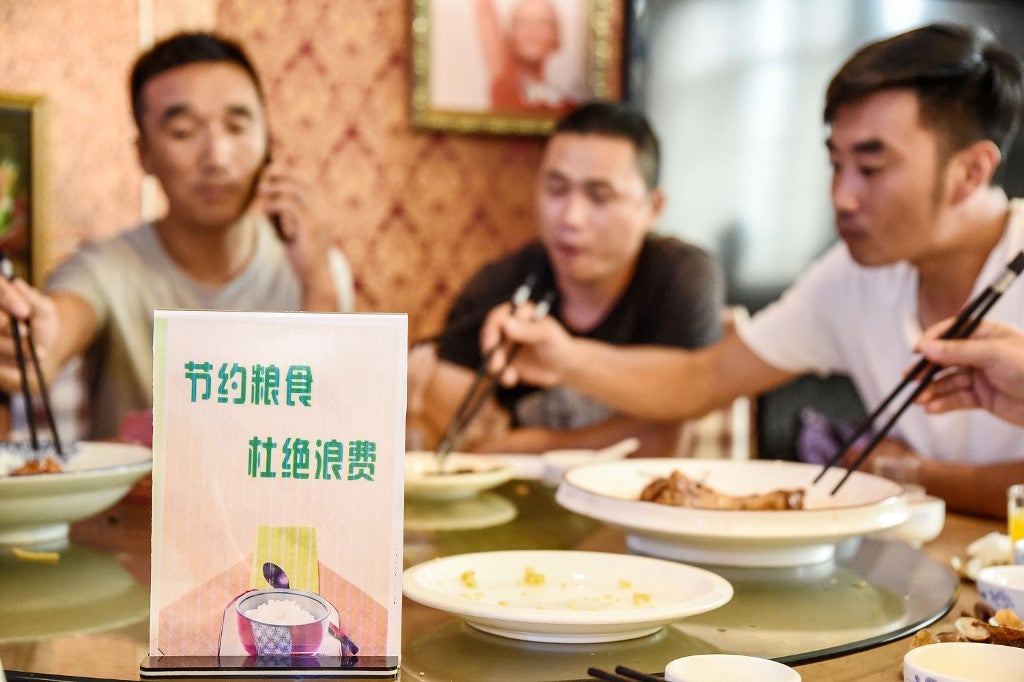 A sign encouraging people not to waste food is seen at a restaurant in Handan in China’s northern Hebei province on August 13, 2020. Chinese diners are being urged to order “one less plate” after Chinese President Xi Jinping made a speech urging the nation to stop wasting food and embrace thrift. (Photo by STR / AFP) / China OUT

A restaurant in China has apologized for its controversial policy of asking diners to weigh themselves before entry in an overzealous response to a new national campaign against food waste.

The beef restaurant in the central city of Changsha was heavily criticized on Chinese social media as soon as it unveiled the policy on Friday.

Customers were asked to stand on scales and scan their data into an app that recommended food choices based on their weight and the dishes’ calorific value, according to a report by the state-run China News Service.

President Xi Jinping this week urged the nation to stop wasting food, as the coronavirus pandemic and serious flooding last month have led to a rise in food prices.

In response, regional catering groups have urged customers to order one dish fewer than the number of diners at a table — an attempt to overturn the ingrained cultural habit of ordering extra food for group meals.

Signs were displayed in the beef restaurant reading “be thrifty and diligent, promote empty plates” and “operation empty plate” — referring to the nationwide campaign — according to photos published in local media.

In a swift backlash, hashtags related to the incident have been viewed over 300 million times on the social platform Weibo.

The restaurant said it was “deeply sorry” for its interpretation of the anti-waste campaign.

“Our original intentions were to advocate stopping waste and ordering food in a healthy way. We never forced customers to weigh themselves,” it said in an apology posted online on Saturday morning.

NASA astronaut plans to cast her ballot from space station