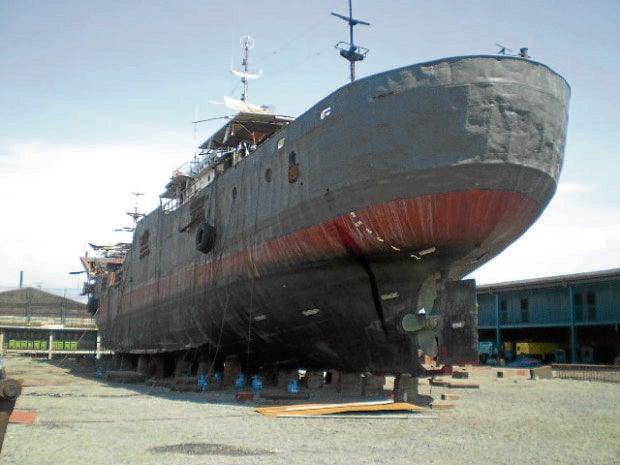 IT’S GONE NOW The fishing boat Liberty 5. Rescuers are pressing the search for the 12 fishermen and two passengers of the vessel,which sank in waters off Mamburao in Occidental Mindoro after colliding with the Hong Kong-flagged cargo ship Vienna Wood late Saturday. —PHOTO COURTESY OF IRMA FISHING AND TRADING INC.

The Philippine Coast Guard on Tuesday said that due to a number of factors, the crew of a Hong Kong-flagged cargo ship was only able to do half of what they were expected to do after their vessel collided with a Filipino fishing boat off the coast of Mamburao town in Occidental Mindoro province late Saturday.

Vice Adm. George Ursabia Jr., the Coast Guard commandant, said that while the bulk carrier Vienna Wood had enough service and lifeboats on deck, its crew did not deploy any of these to rescue or provide assistance to the 14 people on the fishing vessel Liberty 5 after the collision.

Instead, Ursabia said, the cargo ship’s crew relied on seven other boats in the area off the coast of Barangay Tayamaan to respond as their vessel maneuvered away from the wreck to avoid causing further damage to the Liberty 5 and hitting the rescuers.

Too early for conclusions

“It’s too early to conclude [that they did all they can], but if you’re a mariner on a huge ship and there are small boats responding [to the incident], the first thing you would do is to move away because you may drift toward them due to the strong waves. By the time you have maneuvered away, only then can you launch your rescue team,” Ursabia told reporters in an online press briefing.

But no such rescue efforts happened after the close to 32,000-ton Vienna Wood moved away from the collision site.

Ursabia said that even if there were already other boats attempting to rescue the crew and passengers of the Liberty 5, the crew of the cargo ship should have also provided immediate assistance.

According to initial investigation, the Coast Guard found that the cargo ship was unable to launch its own rescue team due to unfavorable sea conditions.

Ursabia said that because the Australia-bound ship was empty at the time of the collision, its freeboard—the distance between the water line and the main deck—was “very high.”

“It will take time in launching their small boats in order to respond. Not to mention the visibility during that time was very poor as well as the sea condition. So their priority was to bring their ship away from the capsized fishing vessel and to those responding boats [to avoid hitting] the small vessels,” Ursabia said.

“I think it’s too early to say but bringing their ship away but not leaving the area, they have done their part. I would say 50 percent of what they are expected to do,” he added.

As of Tuesday noon, the Coast Guard had yet to find any survivor from the fishing vessel. Ursabia said that while there were “no signs of survivors for now” the Coast Guard remained hopeful that the crew and passengers of the Liberty 5 would be found.

He said the search and rescue efforts would continue until Wednesday.

By Thursday, he said an assessment would be done to see whether the operations would be continued.

Except for Alfonso, who is from Aklan, the rest of the crew and the passengers are from Palawan, the BFAR said.

It said it would give one sack of rice each to the families of the crew as immediate assistance, and gave assurance that they would receive further aid, including 9-meter fiberglass fishing boats.

Though the weather and sea conditions on Saturday night were unfavorable, Ursabia said investigators were looking into other factors that may have prevented the collision or caused the immediate rescue of the fishermen.

Among these, he said, would be a check on whether the cargo ship’s crew member on watch was competent enough for the task. He said a third mate, or the most junior officer, was assigned to the watch at the time of the collision.

He said investigators would also look into whether the ship’s safety management system was responsive and if it did try to avoid the Liberty 5 as claimed by the crew.

A report to Ursabia said the cargo ship was able to pick up two vessels on its radar before the collision. The Vienna Wood was able to communicate with the second ship.

“The problem with the fishing vessel, according to the master of the bulk carrier, was that what they saw [from the Liberty 5] was a white light [signal], which means you’re following the ship and you’re in the same direction,” he said, noting that this “confused” the crew.

Still, the ship veered to the left to avoid the vessel, which Ursabia said was the “rational” thing to do.

“But in doing so the fishing vessel suddenly altered course and they ended up colliding. That’s what the master of the bulk carrier said and we have yet to validate that by reviewing their AIS (automatic identification system) track, which we have now,” he said.

While the collision occurred at 10:20 p.m. on Saturday, the Coast Guard only received a distress call from the ship at 1:46 a.m. on Sunday via email.

Ursabia said investigators were also looking into why it took the cargo vessel’s crew three hours to report the incident, given that this time was “critical” to saving the lives of the people on the Liberty 5.

The Coast Guard chief said the Philippines was not equipped with the latest maritime distress safety system, which would have helped save lives.

The Coast Guard relies on VHF radio, which Ursabia said may have been out of range for the cargo ship, that’s why it sent the distress call by email.

On Tuesday, lawyers for AM Nomikos, operator of the Vienna Wood, and Irma Fishing and Trading Inc., which owns the Liberty 5, met to discuss possible insurance claims.

“[Both companies] have insurance, but [the Vienna Wood] may have liabilities more than just [property damage], especially with possible loss of life,” Commodore Leovigildo Panopio, the Coast Guard commandant in Southern Tagalog, said.

Fermin Soto, general manager of Irma Fishing and Trading, said the company had filed a marine protest against the Vienna Wood on behalf of Alfonso and was “doing everything” it could to attain justice for the crew and passengers of the Liberty 5.

Arnold Naval, a lawyer for Irma Fishing and Trading, said the counsels were studying the facts of the case to bring criminal or civil charges against the owner and crew of the Chinese cargo vessel.

The Vienna Wood and its 20-member Chinese crew are in the Coast Guard’s custody at the agency’s anchorage bay in Batangas City. The captain of the bulk carrier has been identified as Zhang Wei Wei.

Panopio said Zhang had told investigators that the Vienna Wood had no intention to flee after the collision.

“They stopped after the collision, but it was too dark,” Panopio said.

They did not launch their lifeboats because the raging waves would have pounded them on the vessel, he added.

Soto appealed to the government to press the search for the crew and passengers of the Liberty 5.

Sen. Risa Hontiveros urged Malacañang not to make light of the accident, after presidential spokesperson Harry Roque described the incident on Monday as “just a collision.”

“We should side with our fishermen,” Hontiveros said. “We shouldn’t soft-pedal these incidents when we know this is not the first time that Chinese vessels have put Filipinos in danger.”

She was referring to the sinking of the Philippine fishing boat Gem-Ver 1 after being hit by a Chinese trawler near Recto Bank in the West Philippine Sea in June last year. The Chinese vessel fled, abandoning 22 Filipino fishermen in the open sea. The fishermen were rescued by a Vietnamese fishing boat and they received aid from private donors, but the owners and crew of the Chinese vessel were never called to account.

Senate President Vicente Sotto III said the Navy and the Coast Guard should go “all out” in investigating the sinking of the Liberty 5, and urged them to find the missing. —WITH REPORTS FROM KARL R. OCAMPO, MEG ADONIS, MARLON RAMOS, ROMAR MIRANDA AND MARICAR CINCO INQ