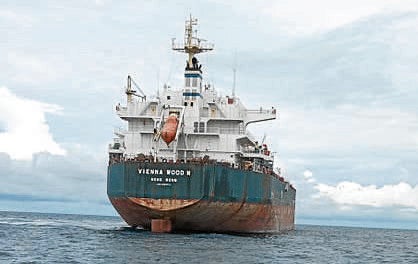 ON HOLD The bulk carrier MV Vienna Wood collided with the fishing vessel Liberty 5 off Mindoro. —PHOTO COURTESY OF BFAR-MIMAROPA

Though it had called off its search for the missing crew and passengers of the fishing vessel Liberty 5, the Philippine Coast Guard (PCG) told their families on Wednesday that there was still “a possibility that they are alive,” as it vowed to hold responsible the Chinese crew involved in the June 28 collision off the coast of Occidental Mindoro.

“It is too early for us to say that they are dead. They remain missing,” said Vice Adm. George Ursabia Jr., PCG commandant, in a meeting with the families of the 14 collision casualties and representatives of vessel owner Irma Fishing and Trading Inc.

The Coast Guard terminated its 10-day sea and aerial search to locate the 12 fishermen and two passengers of the fishing boat on Tuesday, but said it would continue to monitor and patrol the collision site off the coast of Barangay Tayamaan in Mamburao town, Occidental Mindoro province.

Ursabia said they had also filed a motion to prevent the Chinese crew from leaving the country while the investigation was ongoing. A hold departure order would be issued against the crew within the week, he assured the fishermen’s families.

The 45-meter fishing vessel Liberty 5 was headed for Navotas City, Metro Manila, from Cagayan de Tawi-Tawi when it collided with the cargo vessel Vienna Wood early morning of June 28.

The Vienna Wood, a bulk carrier registered in Hong Kong that carried a crew of 20, was on its way to Australia from Subic, Zambales province, when the collision occurred.

Initial investigation showed the collision occurred due to “rough seas,” said Commodore Armando Balilo, acting commander of the PCG public affairs office. The captain of the carrier sent a distress call via email “a few hours after,” he added.

Ursabia meanwhile dispelled concerns that China was meddling with the incident as he vowed to pursue justice for the missing Filipino fishermen and crew.

“No matter how long this case takes, we will not let go of it … We want to achieve justice for our countrymen who are the victims here,” he said.