Despite risks, villagers made Taal Volcano island their home

Despite risks, villagers made Taal Volcano island their home 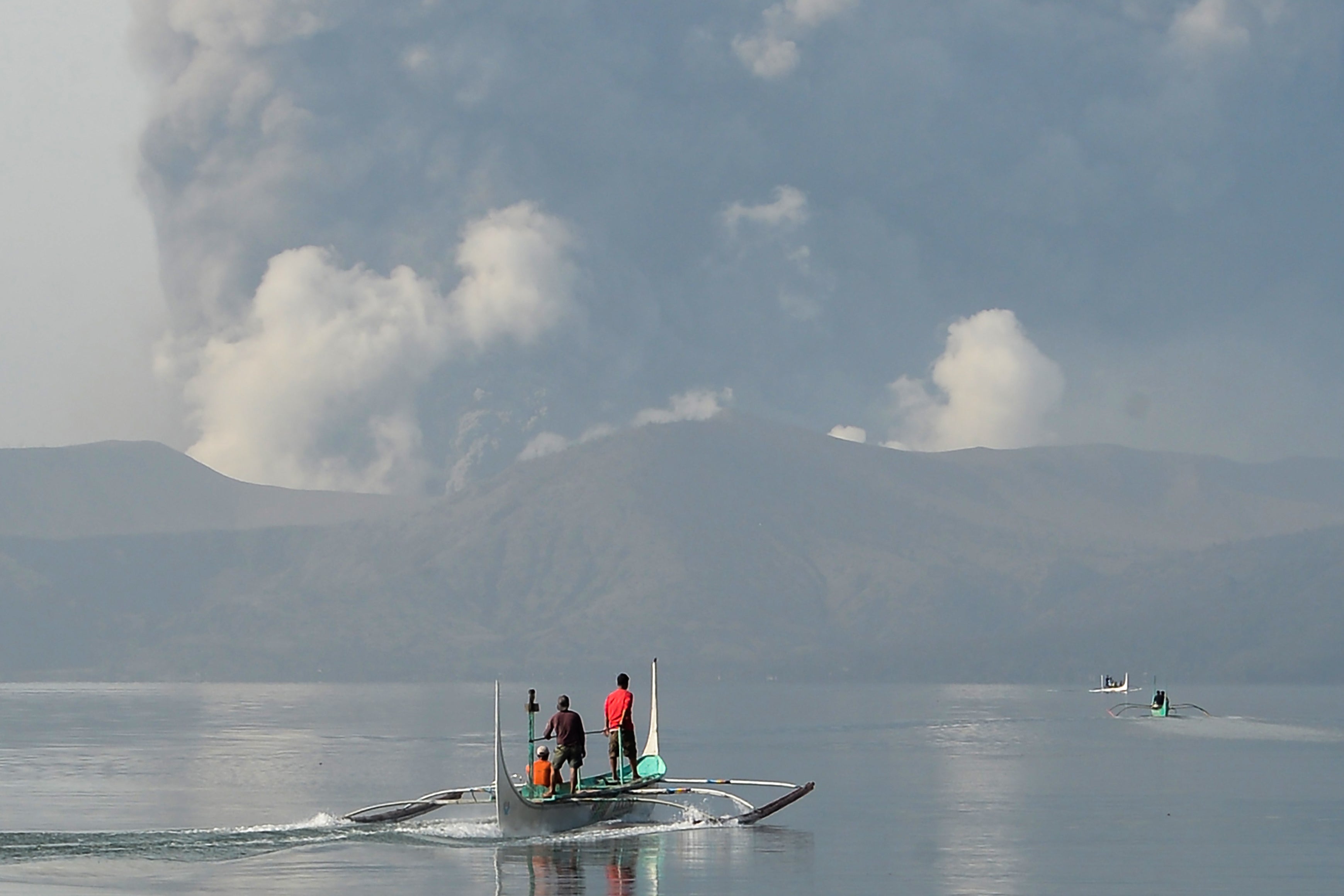 Residents living at the foot of Taal volcano ride outrigger canoes to reach their homes while the volcano spews ash as seen from Tanauan town in Batangas on January 13, 2020. (AFP)

TALISAY, Philippines — It’s the second-most active volcano in the Philippines, a designated permanent danger zone long declared off-limits to human settlements. Yet to more than 5,000 people the Taal Volcano is home.

A lush island dotted with dozens of craters in the middle of a shimmering lake, the volcano roared into action Sunday with a mighty eruption that shot rocks, ash and steam miles into the sky just hours after the inhabitants of its four villages fled on a flotilla of boats. A man who defied official warnings about the ongoing eruption to sneak back to the island to check on his pigs, says there is complete devastation.

“Almost everything was destroyed,” Christian Morales told The Associated Press, adding that he was only able to get his bearings after seeing the cross of a mud-encrusted Catholic church where he used to hear Mass. “If anybody defied orders and stayed behind, he would have been killed without a doubt.”

So far no one has been reported killed in the eruption, but the disaster is spotlighting the longstanding dilemma of how the government can move settlements away from danger zones threatened by volcanoes, landslides, floods and typhoons in one of the world’s most disaster-prone countries.

Sometimes, as is the case with Taal, the settlements are in violation of laws that have not been enforced.

“It’s an accident waiting to happen,” Renato Solidum, head of the Philippine Institute of Volcanology and Seismology, said of the villages on the island.

He said his agency has repeatedly warned against living on the island, which it has declared a permanent danger zones where people are forbidden from setting up homes. The area was also in the 1960s declared a government-protected area and later a national park, meaning it should be off-limits to permanent settlers.

That has never been enforced, however, and Taal’s destructive explosions have proven deadly in the past, including a 1965 eruption that killed more than 200 people and ravaged the island’s villages.

Nevertheless, poverty, a lack of land and desperation have driven people over the years to the island despite the danger, said Gerry Natanauan, the mayor of Talisay town who has jurisdiction over two of the four island villages. 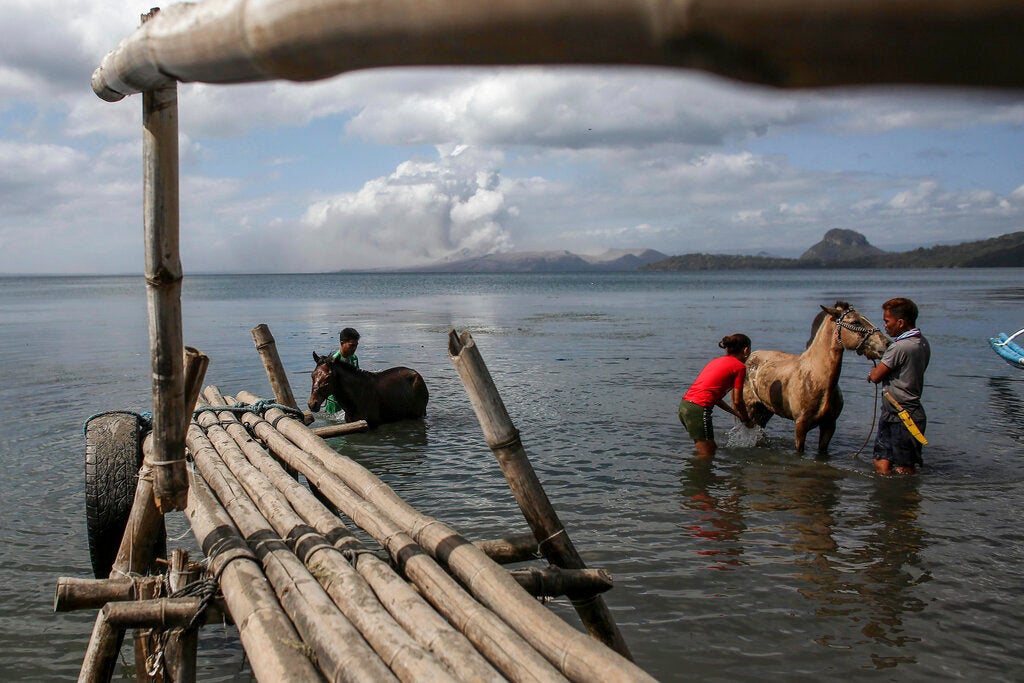 Men clean their horses that they rescued from Taal volcano island in Balete town. (AP)

“It may be difficult to declare the island a no man’s land because like in the past, when that was attempted, it was hard to stop people because when they go hungry, they will always find a way,” Natanauan told the AP.

Another driving factor keeping people on Taal is tourism.

The picturesque island and surrounding region, which sit in Batangas province only 65 kilometers (40 miles) south of Manila and are known for their idyllic views, pine trees and cooler climate, have become a major draw for those seeking a quick escape from the pollution-choked capital.

Areas overlooking the 62,000-hectare (153,200-acre) lake and volcano island, which has its own crater lake, have turned into boom towns of hotels, restaurants and spas. Visitors can go on tours by boat and horse-back, hike trails with sweeping views and hire guides to take them bird watching.

“It’s quiet and clean and there is no trouble and traffic,” Natanauan said. “When you’re able to climb to the peak, it’s really like paradise when you see the entire island with its swarms of birds.”

Many of those living on Taal have found work in the industry, and Natanauan estimated tourism brings P16 million ($314,000) in revenue each year to those on island.

What happens next is unclear. Defense Secretary Delfin Lorenzana has recommended that the thousands of residents should not be allowed to return to the island for good.

“I strongly believe … that Taal island will be declared a no man’s land,” Lorenzana said Tuesday during the televised emergency meeting. “We should not allow people to return there because if there are more violent explosions, people will perish on that island.”

Solidum said perhaps a compromise could be reached in which villagers are allowed to travel to the island during the day to work as tourist guides and tend to farms and then return to their new mainland homes before nightfall.

Natanauan said that would be hard to enforce because the islanders would be wary of leaving their farms unguarded and would eventually stay for good on the island again.

Morales, the pig farmer, said it would probably take years for those on the island to rebuild their lives, but they should be allowed to do so. He said he was less concerned about himself as he lives on the mainland and also earns money taking visitors on boat tours.

He said there were many others who lost their homes, farms and boats.

“I really pity them,” he said. “They have nowhere to go.” Residents living at the foot of Taal volcano wash their volcanic ash-covered horses after rescuing them from their homes and transporting them to Balete town. (AFP)

“Will James and Nadine delete these Instagram photos soon?”