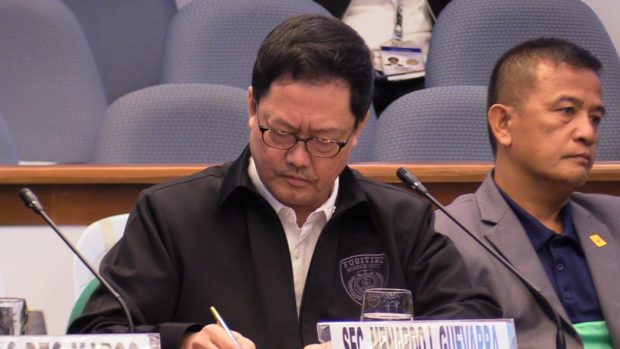 MANILA, Philippines — The Department of Justice (DOJ) on Saturday said it would submit its study on the process of terminating the Philippines’ Visiting Forces Agreement (VFA) with Unites States, which was ordered by President Rodrigo Duterte after US canceled Senator “Bato” dela Rosa’s visa.

“I’m done with the study on the procedure for terminating the VFA but I have to submit first my memo to PRRD [Duterte] on Monday,” Justice Secretary Menardo Guevarra said in a Viber message to reporters.

The Justice department’s study tackles only the termination of the treaty and not the “wisdom of the executive action,” Guevarra explained.

“We shall answer such questions as: Is the VFA a treaty or an executive agreement? If it’s a treaty, is Senate concurrence required for termination? Who will give the notice of termination? Is it necessary to state any ground for termination?” Guevarra said.

The DOJ chief said they have yet to disclose their recommendations as the President needs to read first their memo regarding the study.

Duterte on Friday threatened to discontinue the VFA if the US “correct” its revocation of the U.S. visa of Dela Rosa, who is also the former Philippine National Police chief. The senator’s U.S. visa was canceled allegedly due to his role in the government’s bloody drug war, which killed thousands of Filipinos.

The Justice secretary said they are prepared to help should the government needs to study the effects of VFA termination on the Enhanced Defense Cooperation Agreement (EDCA), another agreement between US and Philippines which aims to heighten defense capabilities country’s military forces.

“Termination by either party  is provided for in the VFA itself. Possible effects on the MDT [Mutual Defense Treaty] and EDCA may have to be studied separately by the DND [Department of National Defense] and DFA [Department of Foreign Affairs], but the DOJ will be ready to assist,” Guevarra said.

The VFA, which was first implemented in 1999, discusses terms and conditions on the visit of US military forces for military exercises in the Philippines. The rules under VFA will apply to entry and temporary stay of US personnel under the EDCA.