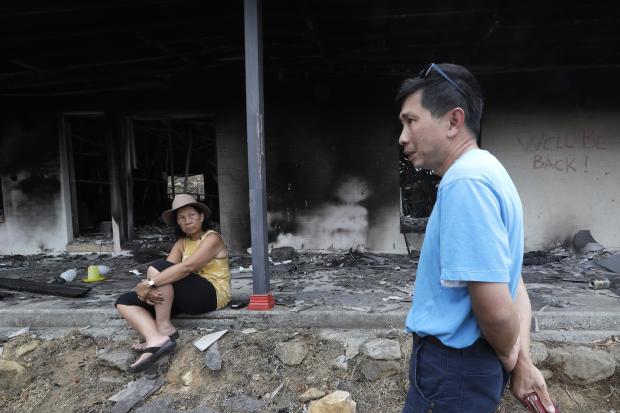 Justin Kam, right, and Helena Wong survey their destroyed home at Balmoral, Australia, Tuesday, Jan. 7, 2020, with a message to themselves written in chalk on the wall promising “We’ll be back.” Kam and Wong built their home with quarter-inch thick reinforced glass, steel framing and rock surrounds to protect them from Australia’s notorious wildfires. But as they stayed home with their son and battled flames that soared as high as a 15-story building, they realized they were in mortal danger. (Photo by RICK RYCROFT / AP)

BALMORAL, Australia — With flames climbing as high as a 15-story building and menacing his supposedly fireproof home on three sides, Justin Kam ran to the laundry room and opened the door. Inside was fire.

That’s not supposed to happen, he thought.

It was clear his family’s fortress had been breached and they were in mortal danger and needed to get out.

“Once the fire had penetrated the structure, that was the signal: Time to get out. You can’t save it,” he said. “Staying in any longer and we really would’ve been a statistic.”

They escaped — just barely — but found themselves among 2,000 homeowners whose houses have burned down during what has been been a catastrophic fire season Down Under, full of apocalyptic images that have focused the world’s attention on climate change.

The blazes have killed at least 25 people, scorched an area twice the size of the U.S. state of Maryland and killed hundreds of millions of animals and birds. The fires are expected to flare up later this week when temperatures rise.

Kam and his wife, Helena Wong, had built their home in the New South Wales town of Balmoral with steel framing, reinforced glass so thick you would need a sledgehammer to break it and retaining walls made of rock, all to protect them from Australia’s notorious wildfires.

Their defenses turned out to be no match for a rapacious fire so hot it evaporated their outdoor furniture, leaving behind ghostly imprints reminiscent of those after the atomic bombing of Hiroshima.

Justin and Helena had moved to their sleepy village of 400 people 20 years ago and thought they had found their slice of paradise. Their house overlooks a valley filled with eucalyptus trees. Kangaroos hop along their veranda, and a wombat dug a burrow under their deck. Helena began breeding rare chickens.

They knew the fires would come, and had successfully fought two before.

On Dec. 21, Justin was ready, watching the progress of the flames from his roof with binoculars. The couple and their 16-year-old son, Gabriel, who was on Christmas break from school, had been raking and wetting down the areas around the house. The had filled buckets, emptied gas cylinders, put on their smoke masks and left two vehicles running in the driveway, just in case.

But this fire was like nothing they had ever seen. A wall of flame came up the valley. A fireball rose 60 meters (200 feet) into the sky. The flames were so hot they were swirling, and not only moving with the wind but also against it.

The family raced to douse embers on one side of the house only to find the flames approaching from a different direction.

The fire killed a half-dozen lizards that took refuge in a pot of water and all of Helena’s chickens. When the flames burst into the house, they melted a champagne bottle, fusing it with some buckled porcelain and a sushi knife.

As the family members ran from their house, Helena’s shoes melted and embers landed on her shoulders. She believes they made it out by no more than 30 seconds. The back of their car had melted, so they jumped into their truck and drove up their driveway to the end of their street.

But there was nowhere to go from there. They were surrounded by flames.

After what might have been five minutes or 10, the fire front moved on and they drove to the fire station, where others were taking shelter.

Among them was Rosemary Doyle, whose own house had burned down. The fire station itself was under threat, and people began to pray, even the atheists among them. The power went out, and Doyle crawled out from the bathroom, thinking: Not today. Not yet. It’s not my time.

On Tuesday, Brendon O’Connor, the town’s volunteer fire captain, said that while the fire had moved on from Balmoral, where it burned down about 25 homes, he doesn’t know when it will stop.

“Either when the good Lord opens up the heavens and gives us weeks of rain, or it burns to the coastline,” he said. “They’re really the options. It really is too large to put out. Anything that we’re doing isn’t working.”

O’Connor on Tuesday attended the funeral for one of two volunteer firefighters killed by a falling tree while driving to Balmoral to help battle the blaze.

When Justin and Helena returned to their burned-out home, they found a piece of pink chalk and used it to write on their wall, “We’ll be back!”

But it will be a long struggle. They are finding it difficult to navigate through all the red tape, and they didn’t have insurance on their house. Justin, a woodworker who built all the family’s furniture, said that was because they had other financial priorities, such as school fees and looking after aging relatives.

“We had our plan in place, but still, it spanked us like little naughty children,” Justin said. “That’s Mother Nature for you.”