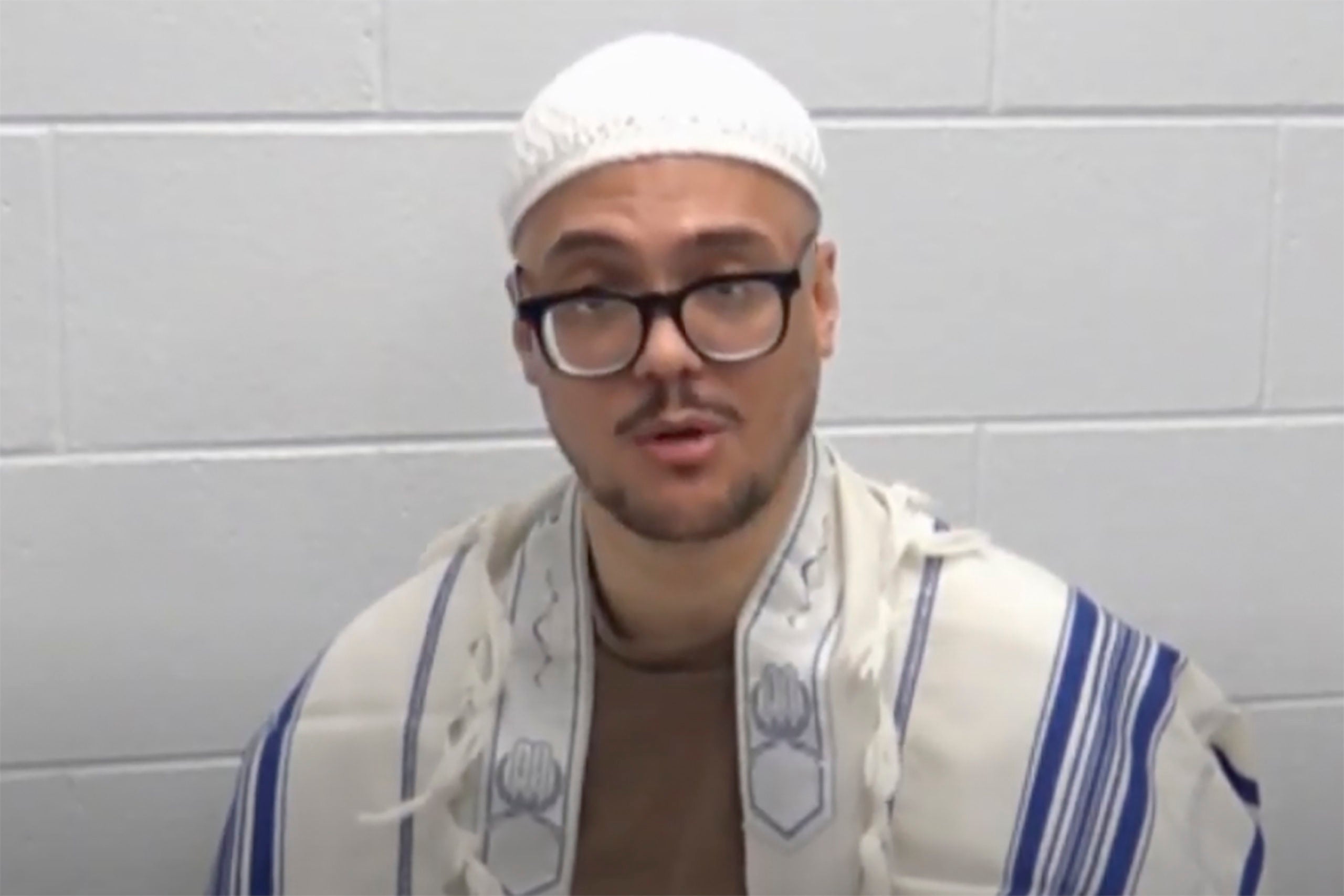 This undated image taken from video provided by attorney Susan Otto shows Christopher Vialva in the federal prison complex in Terre Haute, Ind. Otto, the lawyer for Vialva, the first Black inmate set to die in a series of federal executions this year says race played a central role in landing him on death row for slaying a white couple from Iowa. Otto says just one juror was Black and 11 white at Vialva’s 2000 federal trial in western Texas. Vialva’s execution is scheduled for Thursday, Sept. 24, 2020. (Photo courtesy of Susan Otto via AP)

TERRE HAUTE, Ind. — A man who killed a religious couple visiting Texas from Iowa was executed Thursday, the first Black inmate put to death as part of the Trump administration’s resumption of federal executions after a nearly 20-year pause.

Christopher Vialva, 40, was pronounced dead shortly before 7 p.m. EDT after receiving a lethal injection at the federal prison in Terre Haute, Indiana.

In a last statement, Vialva asked God to comfort the families of the couple he had killed in 1999, saying, “Father … heal their hearts with grace and love.”

After robbing and locking Todd and Stacie Bagley in the trunk of their car, the then-19-year-old Viavla shot them in the head and burned their bodies in the car.

Vialva turned toward his mother behind a glass window in a witness room as the lethal injections began.

“He was looking at me when he died,” his mother, Lisa Brown, told the the Associated Press in a text message, confirming she attended the execution.

The execution comes during demonstrations, disappointment, violence and sadness  in Louisville, Kentucky, after a grand jury did not charge the officers who shot Breonna Taylor with her death, rather filing lower level felonies for shooting into neighboring homes.

Questions about racial bias in the criminal justice system have been front and center since May — following the death of George Floyd after a white Minneapolis police officer pressed his knee on the handcuffed Black man’s neck for several minutes.

Wearing black glasses with especially thick lenses, Viala opened his eyes wide as officials started administering the fatal dose of pentobarbital. He scanned the ceiling lights in the pale green room, furrowed his brows, yawned and then turned his head toward a witness room where his mother was. Within minutes, he no longer moved at all, his head fixed in a tilt toward the witness room, his mouth agape.

White blotches emerged on Vialva’s hands, as his arms, lips and nose turned a purple hue then whitened. After 20 minutes, an official walked into the chamber, listened to Vialva’s chest with a stethoscope and walked out. Seconds later, a voice over an intercom declared Vialva dead at “6:42 p.m.” Later, officials corrected the time to 6:46 p.m. No explanation was given.

Vialva’s lawyer, Susan Otto, has said race played a role in landing her client on death row for killing the white couple.

Vialva was the seventh federal execution since July and the second this week. Five of the first six were white, a move critics argue was a political calculation to avoid uproar. The sixth was Navajo.

Seconds before Vialva shot the Bagleys, Stacie Bagley said to him: “Jesus loves you,” according to court filings.

“I believe when someone deliberately takes the life of another, they suffer the consequences for their actions,” Todd Bagley’s mother, Georgia, wrote in a statement released after the execution.

“Christopher’s mother had the opportunity to visit him for the past 21 years,” she wrote. “We have had to wait for 21 years for justice and closure. We cannot be with our children for visits or to see them on holidays,” Bagley’s mother wrote.

In a video statement released by his lawyers earlier, Vialva expressed regret for what he’d done.

“I committed a grave wrong when I was a lost kid and took two precious lives from this world,” he said. “Every day, I wish I could right this wrong.”

Vialva’s mother also spoke at an anti-death penalty rally Thursday morning across from the prison where her son was later put to death.

“This is the first venue I’ve had in which I could say to Todd and Stacie’s family, ‘I am so sorry for your loss,’” she said.

She also said her son converted to what she described as Messianic Judaism while behind bars. His spiritual adviser was inside the death chamber during the execution.

Otto said one Black juror and 11 white jurors recommended the death sentence in 2000 after prosecutors told them Vialva led a Black gang faction in Killeen, Texas, and killed to boost his gang status. That claim, Otto said, was false and only served to conjure up menacing stereotypes.

“It played right into the narrative that he was a dangerous Black thug who killed these lovely white people. And they were lovely,” Otto said in a recent phone interview.

According to court filings, the Bagleys were on their way home from a Sunday worship service during a visit to Texas when Vialva and his teenage accomplices asked them for a lift after they stopped at a convenience store — planning all along to rob the couple. After the Bagleys agreed and began driving away, Vialva pulled out a gun and told the couple: “Plans have changed.”

After stealing their money, jewelry and ATM card, the teens locked the Bagleys in the trunk of their car as they drove around for hours trying to withdraw money from ATMs and seeking to pawn Stacie Bagley’s wedding ring. The Bagleys, who worked as youth ministers, pleaded for their lives from the trunk and urged their kidnappers to accept Jesus.

The teens eventually pulled to the side of the road and poured lighter fluid inside the car. As they did, the Bagleys sang “Jesus loves us” in the trunk. Vialva, the oldest of the group, donned a ski mask, opened the trunk and shot the Bagleys in the head. Stacie Bagley, prosecutors said at trial, was still alive as flames engulfed the car.

Otto said Vialva’s lawyers during the trial, the sentencing phase and in an initial appeal didn’t appear to raise objections about the racial composition of the jury or the characterization of Vialva as a Black gang leader. That effectively barred subsequent lawyers from raising the issue of racial bias in higher court appeals.