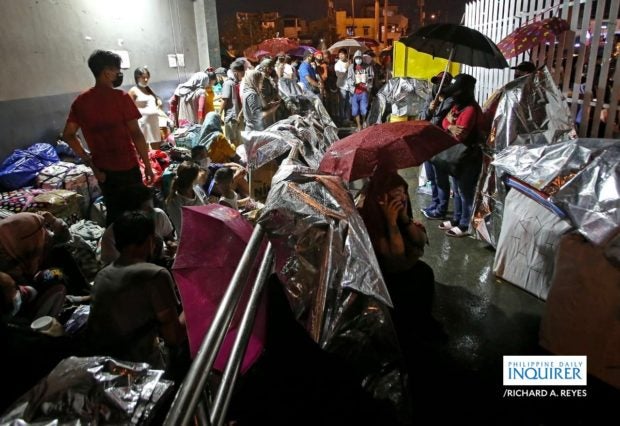 BARRED FROM ENTRY Stranded passengers wait on a rainy Sunday night outside the NorthPort ferry terminal in Tondo, Manila. The terminal accepts only passengers cleared by swab tests. —RICHARD A. REYES

MANILA, Philippines — The government will screen stranded people to be sent back to the province as the number of those on its list has grown to 127,000, according to Secretary Carlito Galvez Jr., chief implementer of the National Task Force Against COVID-19.

At a press briefing on Monday, Galvez said the government would ensure that those on the list were stranded travelers, pointing out that many had taken advantage of the program.

The return of stranded people has been suspended for Western Visayas, Cebu Island, Mactan, Eastern Visayas and the Caraga region. The increase in COVID-19 cases in the regions has been blamed on these returnees, prompting local officials to call for a halt to their entry.

Presidential spokesperson Harry Roque said the moratorium was imposed because the quarantines in these areas were already full, and Cebu and Mactan were under enhanced community quarantine.

Galvez said the government would set the protocol to be followed for the stranded and would submit this for approval on Thursday.

One of the steps being considered is to require them to undergo polymerase chain reaction (PCR) testing upon arrival at their destination, he said.

So far, the PCR test is not yet a requirement for stranded travelers. Until then, requiring them to get travel authority and to undergo a 14-day quarantine on their homecoming still apply, according to Interior Secretary Eduardo Año.

If the local government unit cannot afford to conduct the test, the national government would provide for it, Galvez said.

The task force would also determine the proper timing of the trips home of the stranded people and the kind of transportation they would take, he said.

The cities and municipalities’ quarantines have been overwhelmed by the number of returning residents, who include repatriated overseas Filipino workers.

Galvez said he understood the concerns of the local governments about the returning travelers as several of them had tested positive for the new coronavirus.

Police Lt. Gen. Guillermo Eleazar, Joint Task Force COVID Shield commander, has directed all police commanders to stop for two weeks the issuance of travel authority to the stranded bound for Western Visayas. The region is made up of the provinces of Aklan, Antique, Capiz, Guimaras, Iloilo and Negros Occidental, as well as Bacolod and Iloilo cities.

In a statement on Monday, Eleazar said the directive was based on an order from the National Task Force Against COVID-19 upon the request of local governments in the region.

In Pasay City, where Ninoy Aquino International Airport (Naia) is located, Mayor Emi Calixto-Rubiano has urged people who have no definite flight schedule and booking ticket not to take chances to avoid getting stranded.

Quoting the mayor, Adrian Martinez, the city’s youth development officer and head of a committee on stranded people, advised those with canceled flights to return to their point of origin.

Rubiano has also asked mayors of other localities to fetch them near the airport and accommodate their return.

Martinez said most of the stranded people—many of them not from Pasay—were just taking chances to fly home.

“Some have very far flight dates, but they just opted to go to the airport. Others are merely taking chances. They thought that they would have a place to stay here and that some would feed them, but it only worsens the situation,” he said.

Pasay City has no area designated for stranded people.

The Department of the Interior and Local Government has been facilitating the transfer and accommodation of some of the stranded.

Some are temporarily staying at Fort Bonifacio in Taguig City and Villamor Air Base Elementary School (Vabes) in Pasay.

Earlier, Rubiano ordered the transfer of over 300 stranded persons staying under Naia expressway to Vabes while they awaited their flight back to their provinces during the onslaught of Tropical Depression “Butchoy.” INQ