Herbalife Nutrition Survey Reveals Asia Pacific Consumers Have a Clear Vision for Healthy Aging, But Fear of Illness Due to Lower Immunity Topped List of Aging-Related Worries Infographic_Overcoming the Fear of Aging.jpg

Herbalife Nutrition Survey Reveals Asia Pacific Consumers Have a Clear Vision for Healthy Aging, But Fear of Illness Due to Lower Immunity Topped List of Aging-Related Worries Infographic_Overcoming the Fear of Aging.jpg

HONG KONG, CHINA – Media OutReach – 24 September 2020 – Premier global nutrition company, Herbalife Nutrition, today released findings from the 2020 Asia Pacific Healthy Aging Survey, which revealed that Asia Pacific consumers have a clear vision of what healthy aging means to them, but less than three in 10 consumers had the confidence to age healthily, with the fear of falling ill due to lower immunity as their top worry. 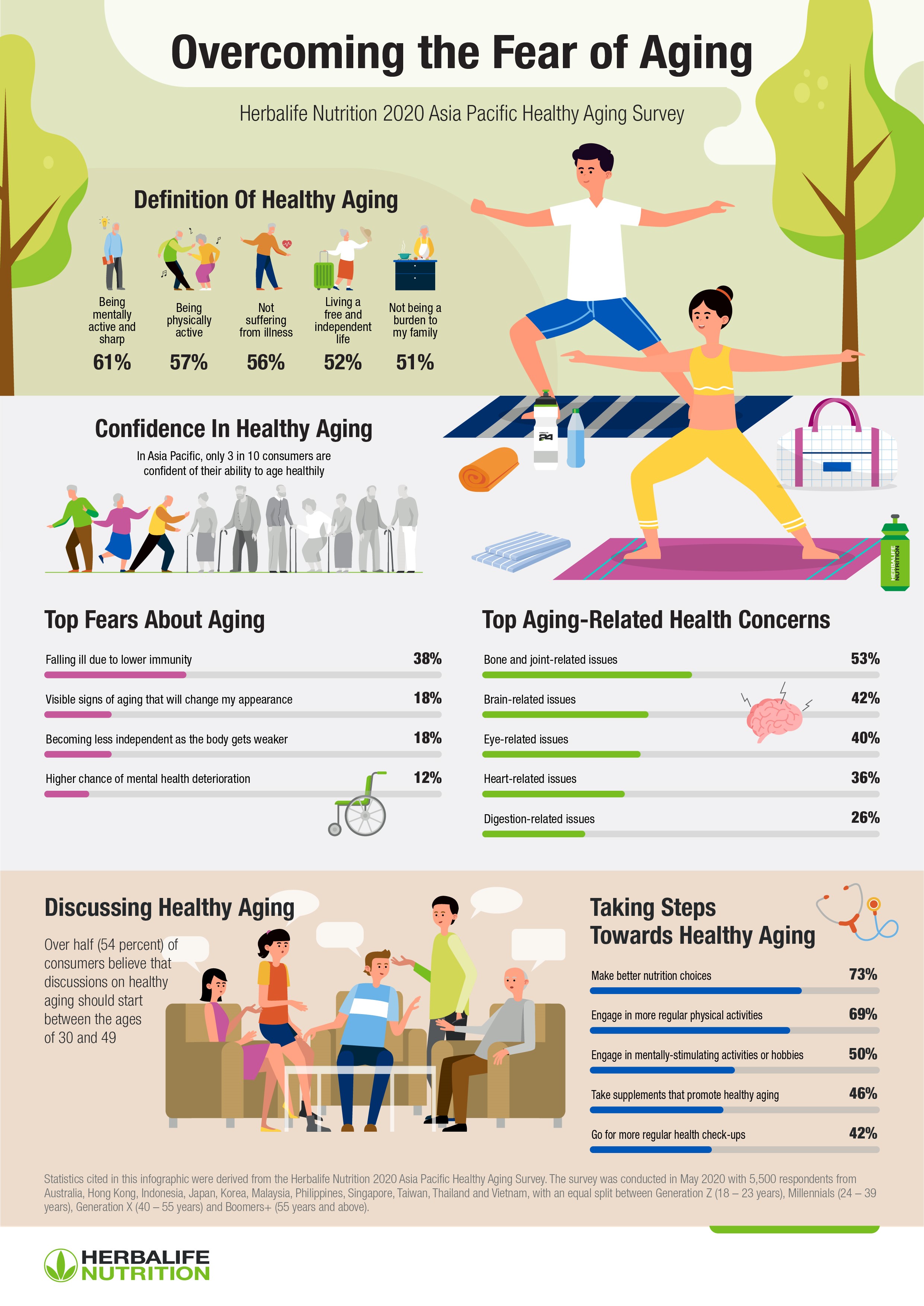 “This is the third edition of our survey designed to uncover concerns about aging across demographic groups and markets in Asia Pacific, the region with the highest average life expectancy in the world,” said Stephen Conchie, Senior Vice President and Managing Director, Herbalife Nutrition Asia Pacific. “The findings showed that many people worry about falling ill due to lower immunity as they age – a likely result of their changing health concerns due to the ongoing pandemic. Additionally, we also observed that consumers in Northeast Asia markets, where an aging population is particularly notable, have lower levels of confidence in their ability to age healthily compared to their Southeast Asia counterparts.”

“As Healthy Aging Month falls in September, this is an opportune time for us to deepen awareness about the need to take steps towards healthy aging earlier in life. At Herbalife Nutrition, we believe that a healthy diet and an active lifestyle can play a part in slowing down or preventing many age-related concerns from materializing.” he added.

When asked to define healthy aging in more tangible terms, Asia Pacific consumers painted a positive picture. Respondents shared that healthy aging is about being mentally active and sharp (61 percent), physically active (57 percent), not suffering from any chronic or acute illness (56 percent), living a free and independent life (52 percent) and not being a burden to their family as they age (51 percent).

Over half (54 percent) of Asia Pacific consumers believe that discussions on how to age healthily should begin between the ages of 30 and 49. The most common reason given for postponing discussions about aging was that they are still young, followed by the prioritization of their present health and lifestyle.

For those who are concerned about aging, two-thirds (60 percent) of consumers started to have concerns between the age of 30 and 59, with bone- and joint-related issues topping the list of specific health concerns, followed by brain-related and eye-related issues.

Across the different demographic groups, younger consumers such as the Generation Z (31 percent) and Millennials (32 percent) displayed greater confidence in their ability to age healthily as compared to their older Generation X (26 percent) and Boomers+ (24 percent) counterparts.

The fear of falling ill due to lower immunity emerged as the top aging-related worry.

Regarding the potential aging-related effects that consumers will experience:

Nonetheless, the majority of Asia Pacific consumers understand the importance of healthy aging, with seven in 10 consumers (73 percent) having taken steps to help age healthily. The steps taken include:

Across the demographic groups, a larger proportion (75 percent) of older consumers such as the Boomer+ have taken steps towards healthy aging as compared to their younger Generation X (70 percent) and Millennial counterparts (71 percent). The Generation Z consumers also seem to be the group that is least likely to take steps towards healthy aging, with only 65 percent having done so.

“Most Asia Pacific consumers have already begun to consider adopting positive habits to age more healthily. However, with the fear of aging being prominent among consumers, we see a crucial need to help them strengthen their confidence in their ability to take proper actions. We believe that by sharing education on adopting the right nutritional habits and appropriate physical activities, we can help people find the right path towards healthy aging,” said Conchie.