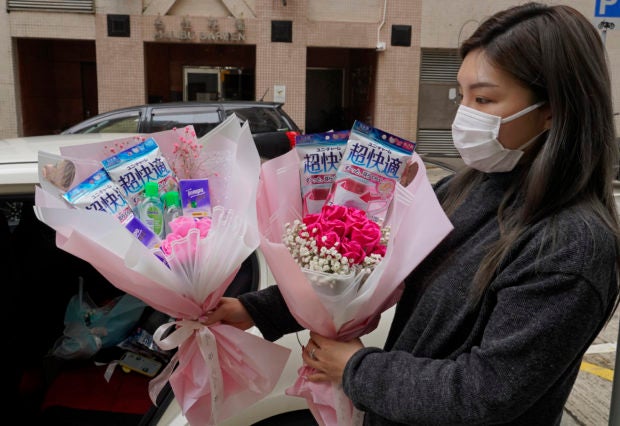 Flower shop owner Iris Leung wears her protective face mask as she delivers flowers with masks to customers on Valentine’s Day in Hong Kong, Friday, Feb. 14, 2020. China has reported another sharp rise in the number of people infected with a new virus, as the death toll neared 1,400. (AP Photo/Vincent Yu)

The amount is more than double the 10 billion Hong Kong dollars ($1.3 billion) the government initially planned.

Lam, whose government has come under fire for its perceived mishandling of the outbreak, said her administration has “put in every effort” to fight the novel coronavirus, now formally named COVID-19 by the World Health Organization. She said the emergency funding reflects its commitment to protect the welfare of the city’s 7.4 million people.

Meanwhile, Singapore has confirmed nine new cases of the new virus, bringing its total to 67. Six are related to a church where seven people including a senior pastor were earlier diagnosed.

The Grace Assembly of God church has shut down its two premises for two weeks and quarantined all staff as it urged members to pray for a victory over the virus.

The Catholic Church, meanwhile, announced that all public Masses will be halted indefinitely from Saturday to minimize the spread of the virus. Archbishop of Singapore William Goh said temperature screening isn’t fool-proof since those who are asymptomatic could be carriers of the virus. As such, Goh said Catholics need to play their part in containing the virus by avoiding large gatherings.

In Japan, its health ministry said 11 elderly passengers on the quarantined cruise ship Diamond Princess were allowed to leave the vessel on Friday after they tested negative for the new virus, which originated in China’s Wuhan City, Hubei province.

They are the first group of dozens of elderly passengers expected to get off the ship before their 14-day quarantine period ends on Feb. 19 to reduce the risk of their health deteriorating.

Health Minister Katsunobu Kato on Thursday said passengers age 80 or older with chronic health issues or in cabins without windows that can open will be able to leave the ship if they pass the virus test.

About 200 passengers in the age group took the test and more are expected to leave the ship in the coming days.