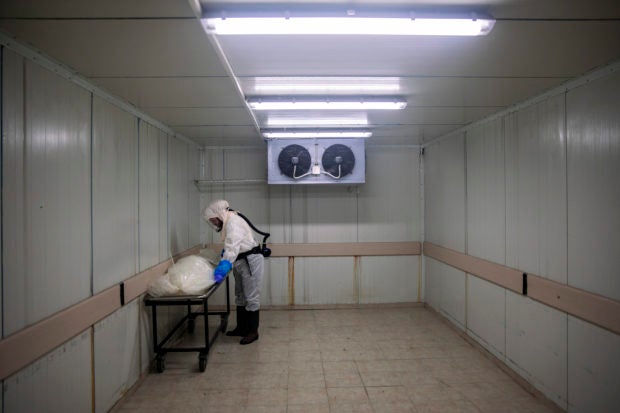 A worker from “Hevra Kadisha,” Israel’s official Jewish burial society, prepares a body before a funeral procession at a special morgue for COVID-19 victims in the central Israeli city of Holon, near Tel Aviv, Wednesday, Sept. 23, 2020. With Israel facing one of the world’s worst outbreaks, burial workers have been forced to wear protective gear and take other safety measures as they cope with a growing number of coronavirus-related deaths. (AP Photo/Oded Balilty)

In a video statement, Netanyahu said there would be a “full lockdown” beginning Friday that would run through Oct. 10. He said the lockdown would continue for at least another two weeks, albeit “hopefully” with some restrictions eased.

“The goal is to reduce the rate of infection, and the goal is literally to save many lives in Israel,” he said, without elaborating on the new restrictions.

Netanyahu announced his plan after two days of heated discussions inside his coronavirus Cabinet.

The measures still require approval by the full Cabinet, Israeli media reported. Netanyahu and his rivals have been bitterly divided over imposing restrictions on public gatherings, particularly large demonstrations by Netanyahu opponents calling on him to resign.

The looming lockdown amounts to an admission of failure by a prime minister who just a few months ago had boasted about being a world leader in responding to the global pandemic.

Israel won widespread praise for moving quickly to contain the coronavirus outbreak early this year, sealing its borders and imposing a strict lockdown. But the economy was reopened too quickly and the virus quickly returned.

Policy makers have also been criticized for a series of confusing and contradictory orders in recent months.

Israel’s Health Ministry reported 6,948 new cases of the coronavirus Wednesday, a new daily record. A country of roughly 9 million people, Israel now has one of the world’s highest rates of coronavirus infections on a per capita basis.

The ministry said 658 people were in serious condition, and health officials have warned that hospitals are quickly approaching full capacity. In all, 1,317 people have died from COVID-19 in Israel.

But the restrictions included numerous exceptions, including allowing people to leave their homes for work, exercise, prayers and public demonstrations.

The new lockdown is expected to eliminate most of those loopholes.

Israeli media reports said officials had feuded over the anti-Netanyahu protests that have been taking place throughout the summer. Thousands of protesters have been gathering outside Netanyahu’s official residence each week calling on him to resign, citing his current trial on corruption charges and his handling of the coronavirus crisis.

The first lockdown sent unemployment skyrocketing to double-digit levels, and experts warn the new lockdown will cause great damage to the struggling economy.

In his statement, Netanyahu acknowledged the economic pain the restrictions will cause. But he said it was better to do this during the current holiday season, when life and the economy tends to slow down, than during busier times.

Netanyahu’s religious political allies have said they would be unfairly targeted if synagogues have to close or limit worship, especially with Yom Kippur, the Day of Atonement, coming next week, while his opponents continue to hold large public demonstrations.

Netanyahu has called for an end to the demonstrations, drawing accusations from his opponents that he is using the health crisis to muzzle them. The new measures are expected to include tight restrictions on demonstrations, allowing people to protest only near their homes and barring them from traveling to large gatherings.

Netanyahu’s chief rival and governing partner, Defense Minister Benny Gantz, accused the prime minister of “disproportionate” focus on the demonstrators and called on the government to accept the recommendations of health experts. Netanyahu’s Likud responded by accusing Gantz of engaging in “petty politics.”

The new measures are sure to be unpopular, after the government forced Israeli Jews to spend last week’s Rosh Hashana holiday at home with their immediate families and to avoid travel. The new measures, if approved, will continue through Yom Kippur, which begins Sunday night, and throughout the weeklong Succot holiday in October. The High Holiday season is usually a joyous time characterized by mild fall weather and gatherings with friends and extended families.

A new poll released Wednesday by the Israel Democracy Institute, a respected think tank, said only 27% of Israelis trust Netanyahu to lead the country’s effort against COVID-19. That compares with 57.5% who trusted him in early April. The survey interviewed 754 adults and had a margin of error of four percentage points.