Israel’s Netanyahu rails at media over protests against him

Israel’s Netanyahu rails at media over protests against him 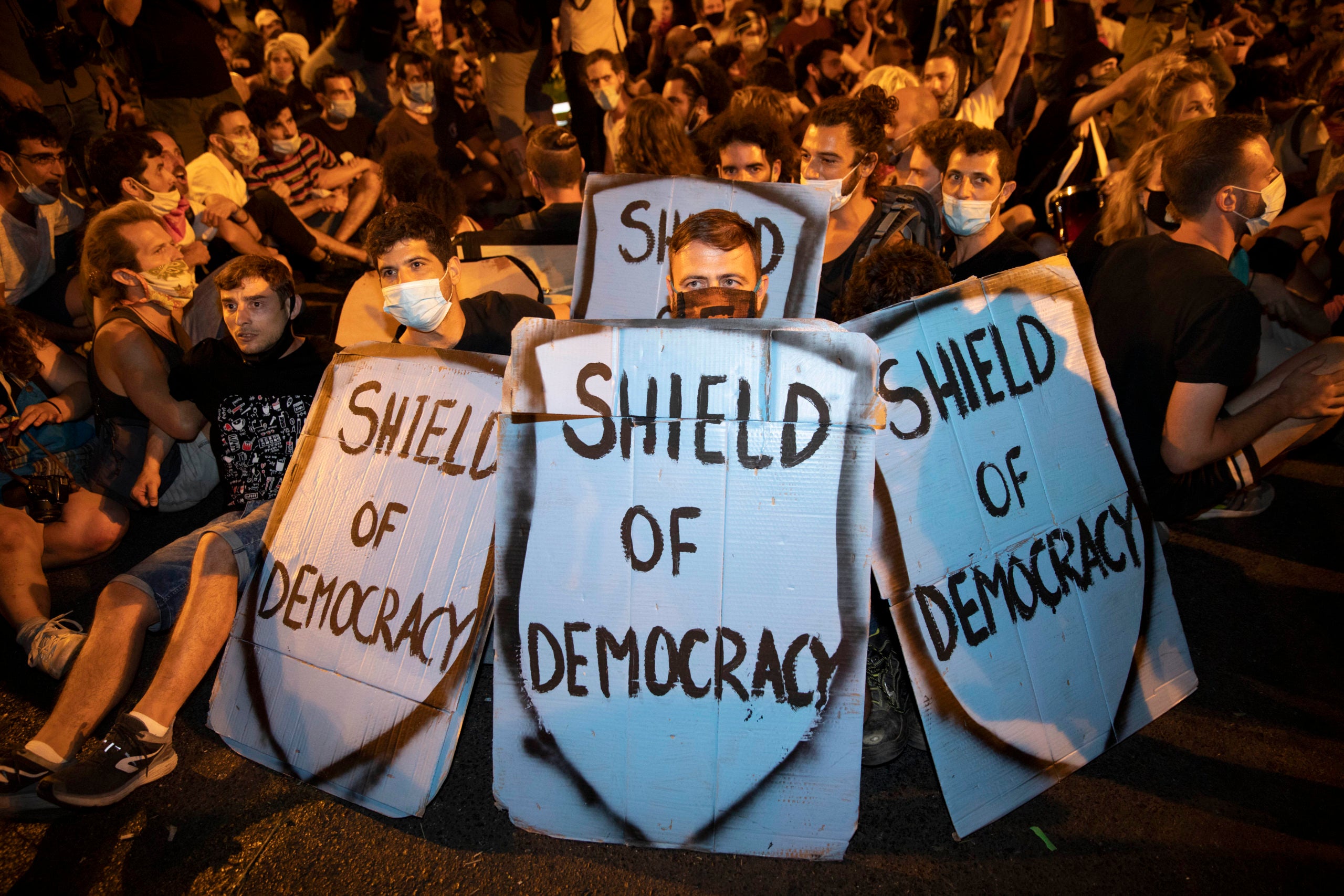 Protesters block a main road during a protest against Israel’s Prime Minister Benjamin Netanyahu outside his residence in Jerusalem, early Sunday, Aug 2, 2020. Protesters demanded that the embattled Israeli leader resign as he faces a trial on corruption charges and grapples with a deepening coronavirus crisis. (AP Photo/Oded Balilty)

TEL AVIV, Israel  — Israeli Prime Minister Benjamin Netanyahu on Sunday railed at swelling protests against his rule, saying they were egged on by a biased media that distorts facts and cheers on the demonstrators.

Netanyahu has faced a wave of protests in recent weeks, with demonstrators calling for the resignation of the long-serving leader, who is on trial for corruption charges. They’ve also panned his handling of the coronavirus crisis. Netanyahu has painted the protests as dens of “anarchists” and “leftists” out to topple “a strong right-wing leader.”

The protests have largely been peaceful. In some cases, they have ended with clashes between demonstrators and police. In others, small gangs of Netanyahu supporters and individuals affiliated with far-right groups have assaulted demonstrators.

In a six-minute rant at a meeting of his Cabinet, Netanyahu slammed the media for “inflaming” the protests and for misrepresenting incidents of violence against the protesters.

“There has never been such a distorted mobilization — I wanted to say Soviet but it has already reached North Korean terms — of the media in favor of the protests,” he said.

Netanyahu said the media ignored “wild and unfettered incitement, including daily calls — including the day before yesterday — to murder the prime minister and his family.”

He said the protests were breeding grounds for the virus that were being allowed to take place with no limits, shutting down streets and neighborhoods. He said right-wing protests have not been given such free rein.

He condemned violence “from all sides” at the start of his remarks before tearing into the media he has long viewed as hostile toward him.

Also at the Cabinet meeting, Israeli Defense Minister Benny Gantz, who is the country’s “alternate” prime minister under a power-sharing deal, said the protests must be allowed to take place with demonstrators shielded from violence.

“The right to protest is the lifeblood of democracy and violence is the erosion of the foundation of democracy,” he said.

Netanyahu’s tirade came as a Jerusalem court ruled that his son Yair Netanyahu must remove a tweet that published the names, addresses, and phone numbers of prominent protesters and called for his followers to demonstrate outside their homes “day and night.” Protesters said they received threatening calls after the tweet. The court also decided he must “refrain from harassing” the protesters for six months.

“Turns out that in our ‘democracy’ you aren’t allowed to protest outside the homes of anarchists who have called to for the prime minister’s murder,” tweeted Yair Netanyahu after the ruling. The 28-year-old has emerged as a driving force in a counterattack against his father’s critics.

Throughout the summer, thousands of Israelis have taken to the streets, calling for Netanyahu to resign, protesting his handling of the country’s coronavirus crisis and saying he should not remain in office while on trial. Though Netanyahu has tried to play down the protests, the twice-a-week gatherings show no signs of slowing, and Saturday night’s Jerusalem gathering drew more than 10,000 people.

The rallies against Netanyahu are the largest Israel has seen since 2011 protests over the country’s high cost of living.

After moving quickly to contain the virus last spring, many believe Israel reopened its economy too quickly, leading to a surge in cases. The country is now coping with record levels of coronavirus, while unemployment has surged to over 20%.

Netanyahu faces charges of fraud, breach of trust and accepting bribes in a series of scandals involving wealthy associates and media moguls. He denies wrongdoing.