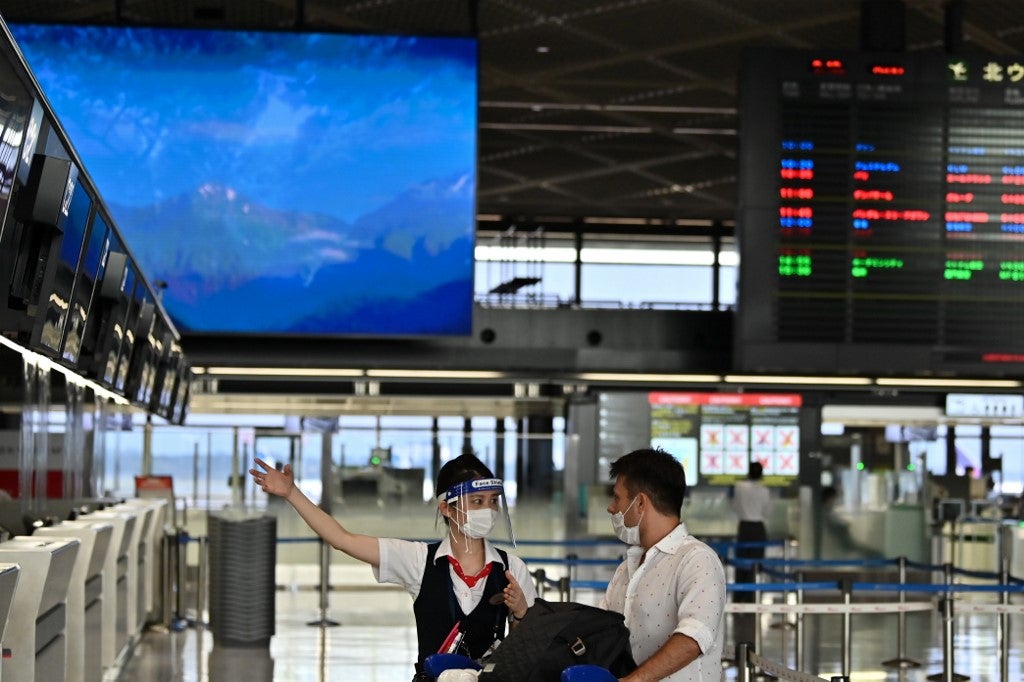 An airline employee wearing a face shield talks with a passenger at the Narita International Airport in Narita, Chiba Prefecture on August 19, 2020. (Photo by CHARLY TRIBALLEAU / AFP)

Tourists would still be banned and only longer-term visas approved, the reports said, as the nation looks to rebuild its economy and prepare for the postponed Olympics next year.

Japan currently bans entry for foreigners from most countries, but has been negotiating the gradual resumption of cross-border business travel.

Business visitors are already allowed from seven places — including Thailand, Vietnam and Taiwan.

This limited travel resumption has not resulted in additional virus cases, so the government is now considering letting in eligible visa-holders from all countries, the Asahi Shimbun newspaper reported, citing unnamed government sources.

Several other local media outlets reported similar stories, also citing unnamed sources. Arrivals would be capped at 1,000 per day and the minimum stay would be three months, they said.

An immigration agency official could not confirm the reports, saying only that negotiations on business travel resumption were ongoing with several countries.

Government spokesman Katsunobu Kato told reporters that ministers “will study how to resume accepting new visitors while preventing a resurgence of infections”.

“We will deal carefully with the issue while keeping an eye on the virus situation,” he added.

With the postponed Olympics due to open in July, discussions are also ongoing about how to handle the arrival and movements of athletes and spectators.