Making a “Mega-Telescope” for Exoplanets

Making a “Mega-Telescope” for Exoplanets

Title: First direct detection of an exoplanet by optical interferometry

TRAPPIST-1 might be the best known system with multiple planets, but HR 8799 has quite a few cool things going for it, too. It’s one of the first systems discovered with direct imaging (actually taking pictures of the planets themselves), and since then people have been observing its four planets moving around in their orbits. The kinds of planets we see around HR 8799 are also very different than those around TRAPPIST-1. The transit method, used to discover the 7 terrestrial TRAPPIST-1 planets, is better suited to find planets very close to their host stars. Direct imaging, on the other hand, is best for the biggest, furthest out planets – young super-Jupiters and brown dwarfs, orbiting 10s to 100s of AU from their stars.

Direct imaging is also able to provide useful information about planetary orbits – it’s really clear to see where each of the HR 8799 planets is (as in Figure 1), whereas with the transit or radial velocity methods it takes a bit more untangling to sort through the overlapping signals of multiple planets. The goal is to determine the orbits, masses, and compositions of these kinds of giant planets, so that we can understand what they’re like and how they formed. For example, looking at the composition of the atmosphere, we can observe how much carbon there is compared to oxygen (the C/O ratio) to figure out where it formed in the protoplanetary disk. The D/H ratio (deuterium to hydrogen) can tell us about how many icy bodies (like Kuiper Belt Objects) a planet must have accreted in its past.

This all sounds great, having a way to trace the formation of big planets – so what’s the catch? Because of the immense challenges of directly imaging a faint exoplanet around a bright star and the limited sizes of our telescopes, we don’t have the spatial resolution needed to really precisely constrain the orbits of these planets or see fine details in their spectra. That’s where today’s paper comes in, describing the first observations of an exoplanet using optical interferometry, a technique that allows for higher spatial resolution by combining multiple telescopes in clever ways.

Interferometry comes up a lot in radio astronomy, such as with ALMA or the recent black hole image from the Event Horizon Telescope. It’s possible to use this same technique for optical/visible light, too. The idea is to use multiple telescopes, separated by some distances (known as the baselines), to collect light from an object simultaneously. It’s possible to combine these observations, and then it’s as if you’re observing with a “virtual” telescope the size of the baseline, which is much larger than any one individual telescope mirror. A larger telescope means better spatial resolution, which is exactly what we need to constrain the orbits and spectra of directly imaged planets.

The authors used the ESO’s VLTI (Very Large Telescope Interferometer) and its GRAVITY instrument to use this technique on one of the HR 8799 planets – specifically, planet e, the one closest to the star. This is a really tricky process, since it requires precise knowledge of the telescope position and movement and more. But, they did it, and obtained the most precise astrometry (position information) of HR 8799 e yet. Their measurements narrowed down the position to tens of microarcseconds, orders of magnitude more precise than what direct imaging has done (see Figure 2). Combined with some previous analysis of the orbits of the whole HR 8799 system, this observation shows us that the planets around HR 8799 aren’t coplanar – that is, some of them must have orbits that are tilted relative to the plane of the whole system. 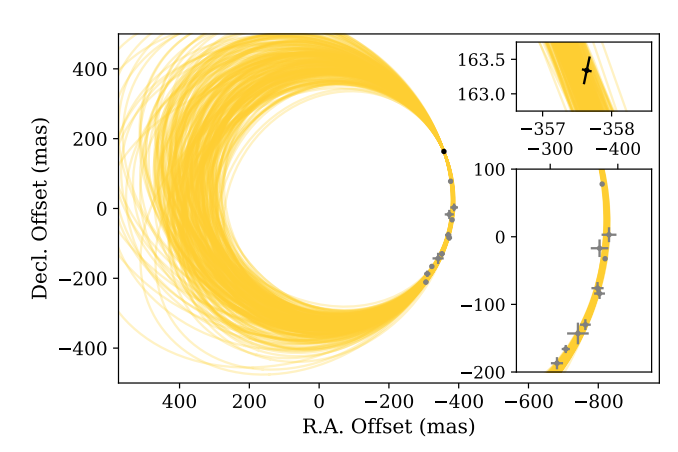 Figure 2: Orbital constraints on HR 8799 e from direct imaging observations (grey data points) plus the new GRAVITY observation (black data point). There’s still a wide range of possible orbits (shown in yellow), but the authors plan to narrow that down once they take a second observation with GRAVITY. (Figure 2 in the paper.)

GRAVITY can also do spectroscopy – see Figure 3 for the spectrum of HR 8799 e! The authors compared this to atmospheric models, which generate spectra for different kinds of atmospheres that the authors can then compare to the observed spectrum. They determined that HR 8799 e is likely an L-type brown dwarf, with a cool temperature of around 1150 K. Observations like this can help tease out what’s going on with the L/T transition, an important evolutionary stage for brown dwarf atmospheres.

Figure 3: A spectrum of HR 8799 e from GRAVITY, shown with best fit models and other observations of this object. (Figure 3 in the paper.)

Many other planetary systems should be observable with GRAVITY, and the team has already set their sights on some of the well-known directly imaged planets, like Beta Pictoris b. Overall, this is an exciting first result for a promising new technique – orbital monitoring and spectroscopy with this precision can really help us understand directly imaged systems. In the future, larger baseline interferometry could maybe even resolve exoplanetary surfaces, showing clouds and other features!