Mexican president to talk trade with Trump as virus rages

Mexican president to talk trade with Trump as virus rages

MEXICO CITY —Mexican President Andres Manuel Lopez Obrador heads to Washington on Wednesday to talk trade with Donald Trump, against the backdrop of the coronavirus pandemic and the US leader’s bid for re-election. 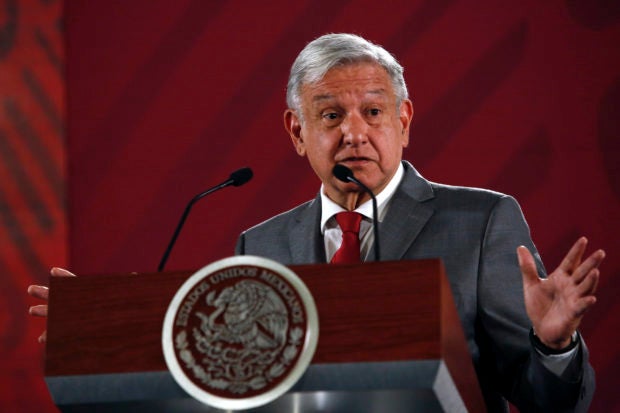 Mexico’s President Andrés Manuel López Obrador says Mexico will not respond to U.S. President Donald Trump’s threat of coercive tariffs with desperation, but instead push for dialogue, during his daily morning press conference at the National Palace, in Mexico City, Friday, May 31, 2019. AP Photo/Ginnette Riquelme

It will be Lopez Obrador’s first foreign visit after 18 months in the job and will see him meet a president known for his anti-Mexico rhetoric.

It is a pragmatic move to visit Trump, a man who described Mexicans as “rapists” and bringing “drugs” and “crime” during his successful 2016 election campaign and who has vowed to build a wall across the southern US border to keep such people out.

“I want to maintain good relations with the United States, that’s what suits us,” Lopez Obrador, who has faced criticism over the visit, said on Tuesday.

Having previously refused to wear a face mask, Lopez Obrador was seen with his mouth and nose covered by a blue surgical mask aboard the airplane in images diffused by the Grupo Formula TV station — wearing a face mask is an obligation on airplanes.

He also took a COVID-19 test for the first time, another requirement to leave the country.

Lopez Obrador, widely known by his initials AMLO, previously said the main purpose of the visit was to kick-start the new North American trade deal that came into force on July 1, as well as to thank Trump for supplying equipment to fight the coronavirus.

“It’s not surprising that AMLO’s first foreign travel as president is to the White House,” Michael Shifter, director of the Inter-American Dialogue think-tank, told AFP.

“His policy towards the US under Trump has been… to avoid any conflict.”

The Mexican president is banking on the US-Mexico-Canada Agreement (USMCA) helping to drag his country’s economy out of the 8.8 percent contraction expected this year due to the pandemic, which has left more than 30,000 dead in Mexico.

But there’s more to this visit than just trade.

It comes just four months ahead of Trump’s bid for re-election, and some Latino Democratic legislators have called on the US president to cancel, saying it “politicizes” bilateral relations.

However, the visit is going ahead, and the White House said the two presidents would meet as part of their “continued partnership on trade, health, and other issues central to regional prosperity and security.”

It added that the new deal — signed at Trump’s insistence as he wanted to ditch the previous agreement, known as NAFTA — would “ensure North America continues strengthening its economic ties while working to combat the coronavirus pandemic.”

Lopez Obrador has dismissed any notion that his visit could help Trump, although he has ruled out meeting with the Republican president’s Democratic rival Joe Biden.

“It is best for our people… to reinforce the commercial economic relationship, regardless of the partisan issue,” said Lopez Obrador.

Some 12 million people born in Mexico live in the US and another 26 million are second or third generation immigrants with Mexican heritage. Between them they sent $36 billion in remittances to Mexico in 2019.

“It’s an unnecessary visit that has a lot of risks and no advantage for Mexico,” former Mexican foreign minister Jorge Castaneda told AFP.

He believes the visit will add nothing to the trade deal but could give Trump an election boost at a time when his popularity has taken a knock over his handling of the coronavirus crisis that has killed 130,000 Americans and infected three million.

Castaneda believes a number of crucial issues will not be discussed.

These include the United States sending asylum seekers to Mexico while they wait for decisions on their case, the recent deportation of Mexicans that have lived in the US for years, and the cancelation of work visas under the pretext of measures to fight the pandemic.

Other issues he says should be on the agenda include the socioeconomic damage of border travel restrictions due to the coronavirus on people living either side of the frontier, and the trafficking of drugs and arms.

“Right now Trump is entirely dedicated to his re-election, to the pandemic and the economy… it doesn’t seem very favorable,” Castaneda added.

For international relations expert Hernan Gomez, the meeting will merely help Trump “reinforce his narrative that he succeeded in his campaign promises” to end NAFTA, which he had called the worst deal ever signed.

Gomez believes there has been “very strong pressure from Trump to do things on his terms,” adding that, after all, it’s “a very asymmetrical relationship.”