Moderna’s Covid-19 vaccine won’t be ready by US election: report

Moderna’s Covid-19 vaccine won’t be ready by US election: report 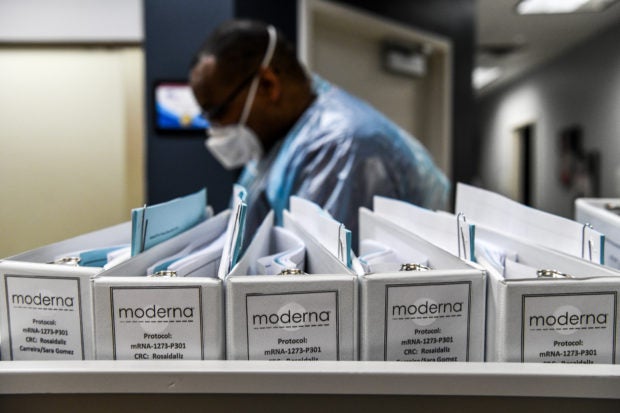 (FILES) In this file photo taken on August 13, 2020 Biotechnology company Moderna protocol files for COVID-19 vaccinations are kept at the Research Centers of America in Hollywood, Florida. – US biotech firm Moderna won’t seek an emergency use authorization for its coronavirus vaccine before November 25, its CEO told the Financial Times on September 30. (Photo by CHANDAN KHANNA / AFP)

WASHINGTON, D.C. , United States – US biotech firm Moderna won’t seek an emergency use authorization for its coronavirus vaccine before November 25, its CEO told the Financial Times on Wednesday.

The news deals a blow to President Donald Trump’s hopes of having an injection ready before the election to give his campaign a much-needed boost.

Stephane Bancel told the newspaper: “November 25 is the time we will have enough safety data to be able to put into an EUA file that we would send to the FDA (Food and Drug Administration) — assuming that the safety data is good, i.e. a vaccine is deemed to be safe.”

Trump, whose approval has taken a hit over his handling of the Covid-19 crisis, has frequently hinted a vaccine could be ready before the November 3 vote.

This has raised concern among experts that his administration may attempt to interfere with the regulatory process for political reasons.

The Republican repeated his claim on Tuesday night, during a debate with his Democratic rival, former vice president Joe Biden.

“It’s a possibility that we’ll have the answer before November 1,” he said.

Moderna’s vaccine is one of 11 experimental vaccines in final stage trials.

Another is being developed by Pfizer, whose CEO Albert Bourla has taken the position that his company may have a clear answer about whether their shot works by October.

Most experts are skeptical of the claim, believing that the ongoing trials will not have sufficient statistical data to prove the drug’s safety and effectiveness by that time.

Speaking to the Washington Post on Tuesday, Bourla denied he was attempting to curry favor with the president by making his October claim.