More US troops off to Mideast; Iran slams Trump ‘act of war’

More US troops off to Mideast; Iran slams Trump ‘act of war’ 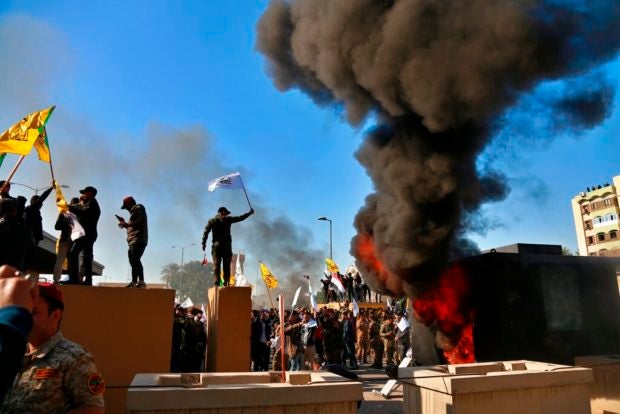 RENEWED TENSIONS Protesters set fires outside the US Embassy compound in Baghdad on Tuesday, the eve of the New Year, an incident that Washington said was instigated in part by Iran’s top general Qassem Soleimani, who was killed in a US airstrike three days later. —PHOTO BY AP

Thousands more US troops were ordered to the Middle East, after the United States assassinated Iran’s top general, Qassem Soleimani, in an airstrike early Friday.

On Saturday, Iraqi state television reported a new airstrike targeting pro-Iran fighters, hours ahead of a planned mourning march for Soleimani in Baghdad.

According to a Pentagon official, 3,000 to 3,500 troops from the 82nd Airborne Division’s Global Response Force—which had already sent hundreds of reinforcements earlier this week—will go to Kuwait.

Some 14,000 other troops have already been deployed as reinforcements to the Middle East this year, reflecting steadily growing tensions with Iran.

The deployment of more troops is in contrast to US President Donald Trump’s repeated claims of having pulled US troops out of conflict zones.

Speaking at West Palm Beach, Florida, on Friday afternoon, Trump confirmed that, “at my direction, the United States military successfully executed a flawless precision strike that killed the No. 1 terrorist anywhere in the world, Qassem Soleimani.”

But Trump also attempted to lower tensions by maintaining that, “We did not take action to start a war.”

“We do not seek regime change,” he also said.

Then in a tweet on Friday night, he said in part, “He [Soleimani] should have been taken out many years ago.’In an interview with CNN, Iranian Ambassador to the United Nations Majid Takht Ravanchi said the attack on Soleimani was “an act of war.”

Soleimani, 62, had long been considered a lethal foe by US lawmakers and presidents. The last straw was an attack by a pro-Iranian mob in Baghdad against the US Embassy this week.

According to Trump, “Soleimani was plotting imminent and sinister attacks on American diplomats and military personnel, but we caught him in the act.”

Western analysts regard the slain general as a dangerous enemy of the United States but also a charismatic and popular leader among his compatriots and elsewhere in the Middle East.

Thousands of mourners gathered on Saturday for a funeral procession through Baghdad in honor of Soleimani. Many of them were dressed in black, as they carried Iraqi flags and the flags of Iran-backed militias fiercely loyal to Soleimani.

In Tehran, tens of thousands of protesters torched US flags and chanted “death to America.”

But hours ahead of these protests, a new strike on Saturday targeted a convoy belonging to the Hashed al-Shaabi, an Iraqi paramilitary network dominated by Shiite factions with close ties to Iran.

The Hashed’s deputy chief, Abu Mahdi al-Muhandis, was also a fatality on the attack on Soleimani on Friday.

The Hashed did not say who it held responsible for the Saturday airstrike but Iraqi state television reported it was a US attack.

A police source said the strike left “dead and wounded,” but did not provide a specific toll. There was no immediate comment from the United States.The White House is portraying the Soleimani killing as evidence of strength.

In a tweet on Friday, the White House said, “Soleimani contributed to terrorist plots to kill innocent people around the world. His reign of terror is over.”

‘Brink of a major conflict’

While Republicans publicly approve the Soleimani killing, Democrats claim Trump is now going down precisely the warmongering path he long railed against.

Democratic presidential aspirant Joe Biden warned in a statement, “We could be on the brink of a major conflict across the Middle East.”

“I hope the administration has thought through the second- and third-order consequences of the path they have chosen,” the former US vice president also said, adding that “Iran will surely respond.”

She also pointed out that the attack “was taken without the consultation of the Congress.”

“American leaders’ highest priority is to protect American lives and interests. But we cannot put the lives of American service members, diplomats and others further at risk by engaging in provocative and disproportionate actions,” Pelosi said in her statement.

Questions have also been raised on the legality or constitutionality of the attack—made amid impeachment efforts confronting Trump this election year.

Agnes Callamard, UN special rapporteur on extrajudicial executions, said: “Under international law, self-defense, to be lawful, will need to be invoked in situations where there is an imminent attack against the interest of the territory, in this case of the United States.”

She added: “At this point in time, the United States has not thus far provided any information suggesting that there was an imminent attack against the American interest.”

The Pentagon said Soleimani was “actively developing” plans to kill US diplomats and service members when he was killed in Friday’s strike.

Renad Mansour of London-based Chatham House said in an interview with Agence France-Presse (AFP), “America hasn’t done something this aggressive in a while, so it has brought back memories of the American military occupation of Iraq [in 2003], as well as the same language and discourse.”

“The narrative of anti-Americanism is coming back,” Mansour said.