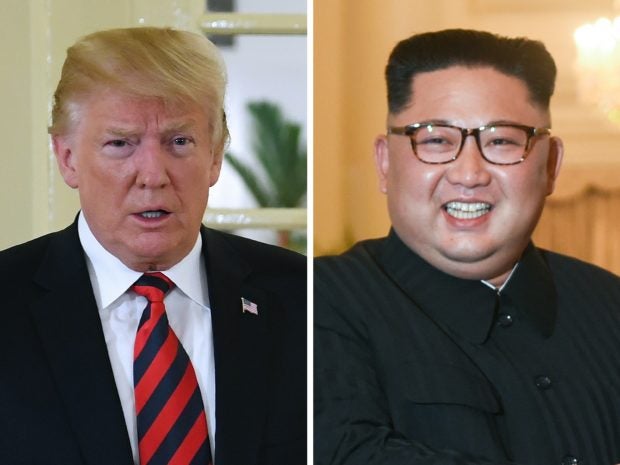 This combination of pictures shows a file photo taken on June 11, 2018 of US President Donald Trump (L) during his meeting with Singapore’s Prime Minister Lee Hsien Loong (not pictured) at The Istana, the official residence of the prime minister, in Singapore; and a file image of North Korea’s leader Kim Jong Un (R) during his meeting with the Singaporean leader the day before on June 10, 2018, in Singapore.
Kim Jong Un and Donald Trump will meet on June 12 for an unprecedented summit in an attempt to address the last festering legacy of the Cold War, with the US president calling it a “one time shot” at peace. / AFP PHOTO / SAUL LOEB AND ROSLAN RAHMAN

Kim offered his sympathy and “warm greetings” to Trump and his wife, KCNA reported.

“He sincerely hoped that they would be recovered as soon as possible,” KCNA said. “He hoped they will surely overcome it.”

Trump and Kim developed an unprecedented relationship, staging the first meetings between a sitting U.S. president and a North Korean leader, and Trump once declared that they “fell in love” after exchanging letters.

Efforts to press North Korea to give up its nuclear program in exchange for the lifting of sanctions stalled after those meeting failed to lead to a denuclearisation deal, but the two leaders have continued to trade messages.