Neowise comet: Worth the wait, once in 6,800 years

Neowise comet: Worth the wait, once in 6,800 years

She has been following astronomy-related pages on social media, so she knew when and how to spot the comet named after a mission of the National Aeronautics and Space Administration (Nasa) of the United States.

It took a lot of patience before she was able to spot the “Comet C/2020 F3 Neowise.”

“My 9-year-old brother spotted the comet on July 22. The next day, it was too cloudy in Malinao and Tabaco City,” Bonagua, a resident of Estancia village in Malinao town of Albay province, said on Saturday.

Finally on Friday, Bonagua saw the comet streak the sky after waiting for nearly an hour from the rooftop of her house. She was with her two younger brothers.

“I thought I wouldn’t see [it] anymore because we waited for a while. It was already 7:43 p.m. when we saw the comet,” she said. 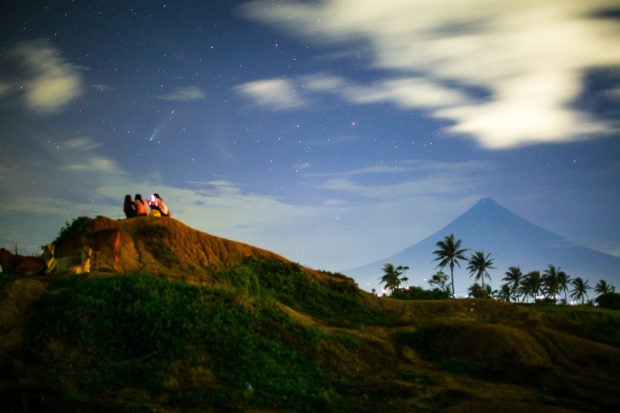 MAKE AWISH After two nights of cloudy weather, comet Neowise is spotted in the northwest sky over Albay province around 8 p.m. on Friday in this long-exposure shot that also captures the majestic Mayon Volcano. In case you can’t find it, the tailed celestial traveler is among the cluster of stars right above the group of hilltop observers in Barangay Estanza, Legazpi City. —MARK ALVIC ESPLANA

Having no luck on July 22, he asked for advice from veteran photographers the following day, only to get cloudy skies.

On his third and last day of attempting to get a photograph of the comet on July 24, Esplana drove up to the upland village of Estanza in Legazpi City.

“I’ve learned that the Neowise Comet could be seen at 318 degrees northwest. I set up a compass above my camera so that I can prepare the angle and composition,” Esplana said, explaining how he was able to capture his comet photo.

“I also used a long exposure technique, this style is based on using a longer shutter speed to capture blur or obscure moving elements,” he added.

At around 8 p.m., or two and a half hours after arriving in Estanza, he set up his camera on manual, with a 15-second delay for the shutter and f/1.4 aperture using his 35mm lens.

“Slowly the skies became clear, stars were shining bright, and I pressed the shutter and waited,” Esplana said. “The result was priceless, after days of waiting, it’s all worth it.”

Comet Neowise, while most visible on Wednesday when it was nearest to the earth, can still be seen until the first week of August, according to the Philippine Atmospheric, Geophysical and Astronomical Services Administration (Pagasa).

Pagasa said amateur astronomers could try looking for the comet after sunset. It is “near the Northwest horizon, just below the famous asterism the Big Dipper,” Pagasa said in a Facebook post.

The Sky Live, an online resource for observing the solar system and the night sky, also said Comet Neowise could be seen by the naked eye, and is most prominent about three hours after sunset.

After the first week of August, Neowise will move away from the sun and won’t be visible again for another 6,800 years, Pagasa said.

“Some comets have been connected to epidemics in the late 16th century and early 17th century,” Gerona told the Inquirer.

“Comet sightings have coincided with many calamities, then like the earthquake in Manila and [a] smallpox epidemic,” he said.