HANOI, VIETNAM – Media OutReach – 14 January 2022 – As part of the VinFuture Award Week (Jan 18 – 21, in Hanoi), the “Science for Life” Symposium will see some of humanity’s greatest thinkers give detailed predictions about the future of mankind. 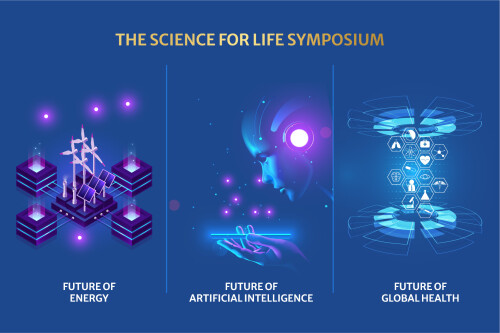 Slated for January 19, the symposium, covering three main areas: Energy, Artificial Intelligence (AI) and Health, is considered a “must-go” event for outstanding minds in global science and technology, who will be attending the VinFuture Awards Week from January 18-22.

The “Future of Energy” session is a unique event in Việt Nam that brings together two Nobel laureates, Sir Konstantin S. Novoselov and Professor Gérard Mourou, as well as the owner of the 2010 Millennium Technology Prize – Sir Richard Henry Friend.

Professor Novoselov, the world’s youngest Nobel laureate in Physics, created graphene known as a super material, which is predicted to become a mainstream material in the future.

Professor Mourou, the 2018 Nobel laureate in Physics, is considered the “father” of ultra-short pulse laser amplification technology – a technique used in eye surgeries for millions of people each year.

Meanwhile, Professor Friend is recognised worldwide as his research has laid the foundation for the birth of OLED screens – a common part in electronic devices such as televisions and smartphones today.

At the symposium, questions about the most important alternative energy sources in the future like “How to make energy cleaner, cheaper and easily accessible to the vast majority of people around the world?” will be addressed. The topic interests both the scientific community and business circles.

At the “Future of Artificial Intelligence” session, the world’s leading scientists such as Dr. Padmanabhan Anandan, Prof. Jennifer Tour Chayes, Dr. Xuedong David Huang, and Dr. Bui Hai Hung will provide an overview of the impact of AI on people’s lives, how to create competitive advantages, close the gap between countries as well and ease potential risks or consider ethical aspects.

The event will bring Vietnamese scholars and public a rare opportunity to meet and talk directly with famous names coming from technology giants such as Microsoft, Google or Adobe.

Attracting the most attention is probably the “Future of Health” session, where health ‘spellbinders’ will discuss the progress of medicine, responsibilities in the field of health and issues surrounding the fight against the COVID-19 pandemic and its variants.

Notably, the scientists laying the foundation for COVID-19 vaccines technology will reveal the journey of a nearly 30-year preparation to produce a “weapon” in the fight against the global pandemic. These include Prof. Pieter Rutter Cullis, pioneer in gene therapy using lipid nanoparticle (LNP) technology; Drew Weissman and Dr. Katalin Kariko, co-recipient of the Breakthrough Prize in Life Sciences 2021 with mRNA technology that shortens the production time of vaccines from years to just months.

Attending the symposium, the South African-born professor married couples, Salim Abdool Karim and Quarraisha Abdool Karim, will also share information about the “miracle” Tenofovir. This is considered a breakthrough invention that helps reduce the amount of HIV in the blood and reduces the risk of AIDS-related illnesses and other dangerous infectious diseases.

Right after the “Science for Life” Symposium, the winners of the prestigious VinFuture Prize will be announced in the award ceremony held at 8:10pm on January 20 at the Hanoi Opera House.

The organizers have carefully prepared a COVID-19 test for all guests participating in VinFuture events, in order to ensure a high level of safety.

– January 19, 2022: The “Science for Life” Symposium has three discussion sessions, each session will last 90 minutes with the topics: Future of Energy, Future of Artificial Intelligence and Future of Global Health.