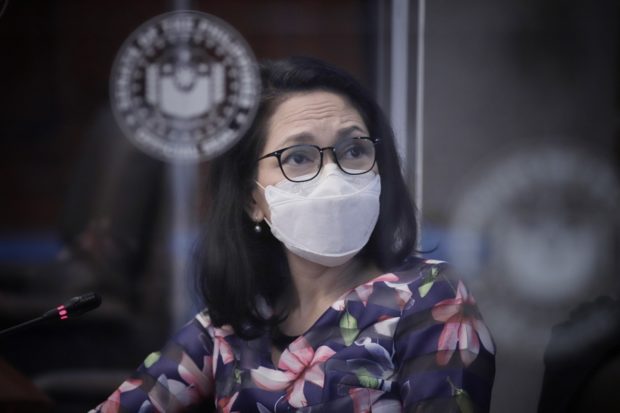 ‘PASTILLAS’ SCAM: Senator Risa Hontiveros, presiding over the hybrid hearing of the Committee on Women, Children, Family Relations and Gender Equality Tuesday, October 20, 2020, says the investigation on the “pastillas scam” in the Bureau of Immigration is getting a big picture. “We will get to the bottom of this. This house of cards will fall. It’s not a matter of if, but when. We will break their business model,” Hontiveros said. (Joseph Vidal/Senate PRIB)

MANILA, Philippines — Senator Risa Hontiveros on Tuesday bared that the “masterminds” of a “corrupt business model” at the immigration bureau have allegedly pocketed over P40-billion in kickbacks since 2017 from facilitating the entry of Chinese nationals through the so-called Visa Upon Arrival (VUA) scheme and the “pastillas” scam.

According to the whistleblowers who surfaced during the hearings, masterminds of the scam take part of the bribe money.

Mariñas was tagged as the alleged “ringleader” of the so-called “pastillas” group. He has since denied allegations against him.

For the VUA transaction, Hontiveros said the purported bribe allegedly goes straight to the main office, where the visas are approved.

The VUA program is a landed visa scheme that the government launched three years ago to attract more Chinese tourists into the country.

Under the scheme, a VUA grantee is allowed to enter and stay in the country for 30 days without the need to obtain an entry visa from a Philippine consulate in his port of origin.

The senator noted that in previous hearings, it was established that VUAs were processed by travel agencies, many of whom only required a mere screen shot of the applicant’s passport sent via WeChat.

“The person involved could have been trafficked by a syndicate, but as long as she or he had no derogatory record on paper, then that person would have been able to enter the country with a VUA,” Hontiveros’ statement read.