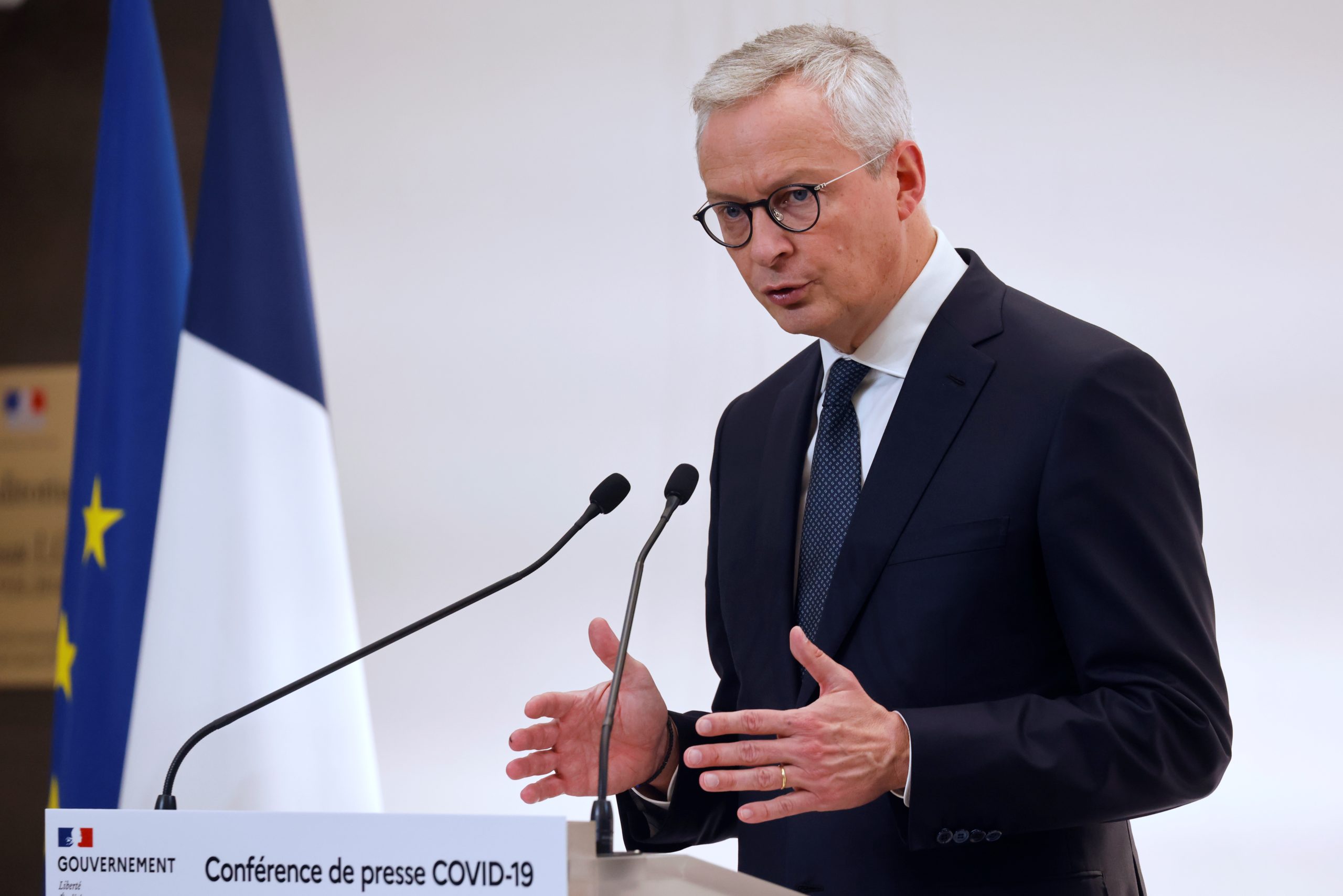 French Economy and Finance Minister Bruno Le Maire speaks during a press conference to present the details of new restrictions aimed at curbing the spread of the COVID-19 pandemic (novel coronavirus), announced the day before by the president, on October 15, 2020, in Paris. – France on October 14 became the latest European country to toughen anti-coronavirus measures, imposing a curfew in Paris and eight other cities from October 17. (Photo by Ludovic MARIN / POOL / AFP)

Paris and other French cities are under a nighttime curfew which will last for at least a month, while England is banning mixed household gatherings in the capital and other areas and Italy’s most populous region is limiting bar openings and suspending sports events.

Cases of the disease which has upended life across the globe and wreaked social and economic havoc have been soaring beyond levels seen in the first wave earlier this year when many countries sought to stem the tide with lockdowns of varying degree.

On Friday, the number of cases in the United States — the hardest-hit country in the world — topped eight million while globally daily infections hit a new record.

In the face of the surge, governments have been forced to embark on ever tighter measures to control the pandemic’s spread, while trying to avoid full-on lockdowns.

Covid-19 has now claimed the lives of 1.1 million across the planet since it first emerged in China in December, with the United States suffering the most deaths of any country at more than 218,000.

About 20 million people in Paris and several other French cities were facing the start of a 9 pm-6 am curfew after the country on Thursday saw a new high of 30,000 cases in 24 hours in one of Europe’s major hotspots.

The move — which will last at least a month — has broad public support, but officials are fretting over the heavy social and economic costs.

“It’s terrible. It feels to me like being back in March,” said Hocine Saal, head of the emergency service at the hospital in the Paris suburb of Montreuil, adding that rising numbers of non-coronavirus patients made coping “really difficult”.

In Britain, which has Europe’s highest death toll at more than 43,000, restrictions are being ramped up with bans on indoor meetings between members of different households in London and several other English cities.

Those zones are in the second of a three-tier alert system introduced by the government of Prime Minister Boris Johnson while some areas — notably in the northwest — have been placed on the highest level.

About 28 million people — half of the population of England — are now subject to tight social restrictions.

But some cities have seen angry protests at what some people see as a return to virtual lockdown.

As Britain battled for a coherent strategy, German Chancellor Angela Merkel urged citizens to stay at home whenever possible after 7,830 cases emerged over 24 hours.

“What will determine winter and our Christmas will be decided in the weeks ahead” by how people react now, she said.

On Friday, a Berlin court overturned an order for restaurants and bars to close early, the latest in a slew of legal rulings upending measures taken by Germany’s national and local governments to fight coronavirus transmission.

In Italy, the wealthy northern region of Lombardy has ordered all bars to shut at midnight as the area where Europe’s first virus cases emerged in February battles a second wave.

Elsewhere in Europe, Poland, the Czech Republic, and Belgium all announced daily record caseloads after the World Health Organization dubbed a 44 percent rise in European cases in a week “very concerning”.

Belgian authorities said Saturday they had reached 200,000 cases less than a month after surpassing 100,000.

Beyond Europe, South Africa, which accounts for around 43 percent of the continent’s diagnosed infections, passed 700,000 positive cases Friday with 61 deaths taking the fatality toll to over 18,000.

As the wait for a vaccine goes on, two U.S. companies said Friday they expect to apply for emergency approval by late November — but experts warn that even when one is approved, it will take many months until they are widely available.