LONDON — Queen Elizabeth II has joined in the virtual unveiling of a new portrait commissioned by Britain’s Foreign Office to honor her services to diplomacy. 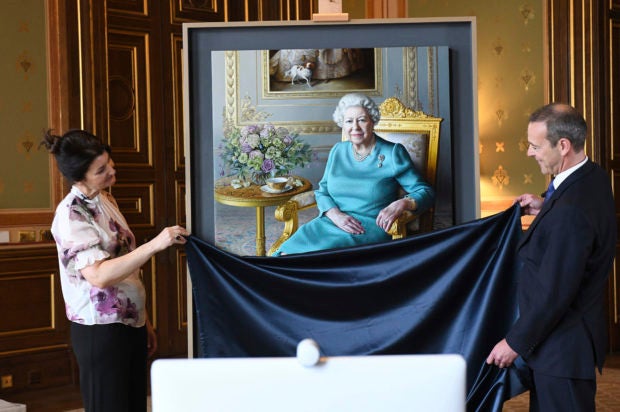 Undated handout photo released Saturday July 25, 2020, by the Royal Communications, showing the unveiling in London of a new portrait of Britain’s Queen Elizabeth II by artist Miriam Escofet, left, with Simon McDonald, Permanent Under-Secretary of State for Foreign and Commonwealth Affairs and Head of the Diplomatic Service, right. The painting was commissioned by the Foreign and Commonwealth Office (FCO), as a ‘lasting tribute to her service’ to diplomacy. The Queen paid a virtual visit to the FCO via video call, to hear about their response to the COVID-19 outbreak and join the unveiling of the new portrait. (Foreign and Commonwealth Office via AP)

The portrait of the monarch by Miriam Escofet is meant to pay tribute to the queen’s work in promoting U.K. interests all over the world.

The queen saw the painting on her computer screen, and observed that a tea cup in the portrait lacked a key ingredient: tea. Escofet told the monarch that she had included the insignia of the FCO on the cup.

“She seemed to react very positively to it,” Escofet said. “She was smiling, asking how long it took and if I had any more projects on the go after this.”

The unveiling took place during a virtual visit in which the monarch was told about how the Foreign Office handled the shock wave of the coronavirus pandemic and brought thousands of British tourists home from far-flung travels.