MANILA, Philippines – Three days before the annual “traslacion” of the Black Nazarene, Quiapo Church officials, government agencies, and the city government of Manila on Monday assured that measures will be in place to ensure the  safety and solemnity of the religious celebration on Thursday, January 9, 2020.

In terms of safety, National Capital Region Police Office (NCRPO) chief Brig. General Debold Sinas said that around 16,000 police personnel have been tasked to secure the route of the traslacion from the Quirino Grandstand in Luneta to the Quiapo Church. 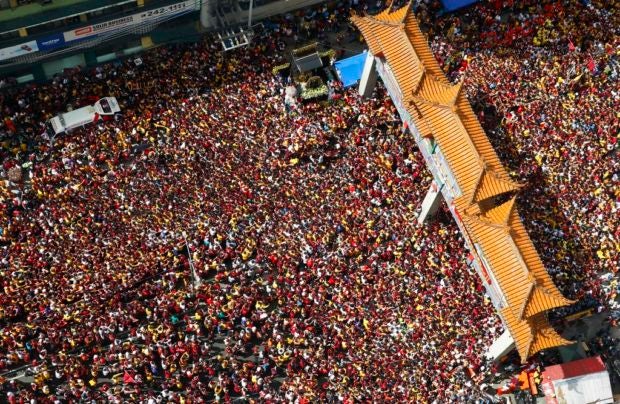 In this photo taken during the 2019 Traslacion, a massive crowd of Filipino Roman Catholic devotees follows the carriage of the Black Nazarene during a raucous procession to celebrate its feast day, January 9, in Manila, Philippines. Tens of thousands of mostly barefoot Filipino Catholics would join the annual procession of a centuries-old statue of Jesus Christ to celebrate the Feast of the Black Nazarene that usually ends before dawn the next day. (AP File Photo/Bullit Marquez)

An “andas wall” composed of over 2,000 members of the police force will also be created to secure the “andas” or the vehicle that carries the Black Nazarene.

Sinas explained that one of the main reasons for the lengthy traslacion in the previous years was devotees blocking the route of the procession.

The back side of the andas, however, will still be accessible to the devotees.

Two “mobile jails” will also be set up along the procession route, Sinas added.

For traffic issues, the Metropolitan Manila Development Authority (MMDA) said that 1,000 personnel will be deployed to assist other government agencies and the Manila city government.

The Department of Health, meanwhile, said medical teams from the health department, public and private hospitals, as well as the Philippine Red Cross will also be deployed to assist devotees with medical and emergency needs during the procession.

The medical teams will be stationed on key sections of the procession route.

Devotees are likewise advised to be ready “physically and spiritually” should they decide to join the millions other devotees who will be present during the traslacion.