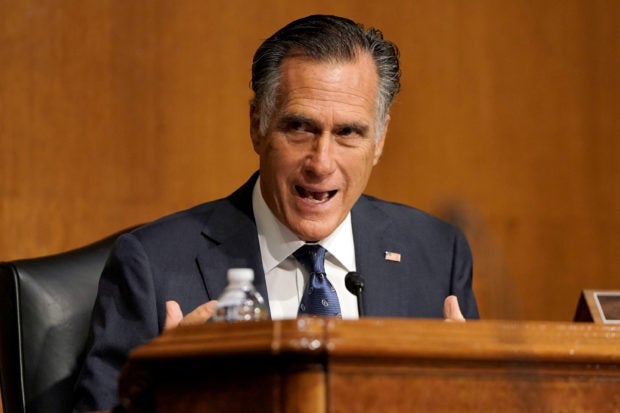 WASHINGTON — Senate Republicans including Mitt Romney on Tuesday lined up behind President Donald Trump’s push to widen the U.S. Supreme Court’s conservative majority, leaving Democrats little hope of blocking a confirmation vote on a nominee to replace Justice Ruth Bader Ginsburg that could come before the Nov. 3 election.

Romney, a rare Trump critic among Republican senators, said he favored having a vote on Trump’s nominee, giving his party enough support to approve the president’s third appointment to the high court. Trump has said he plans to announce his nominee by Saturday and has urged the Senate, where his fellow Republicans hold a 53-47 majority, to vote before the election.

His party’s unsuccessful 2012 presidential nominee, Romney said it would be appropriate for a nation that he described as center-right politically to have a Supreme Court “that reflects center-right points of view.”

Trump has mentioned two women who he has appointed as federal appeals court judges as possible nominees: Amy Coney Barrett of the Chicago-based 7th U.S. Circuit Court of Appeals and Barbara Lagoa of the Atlanta-based 11th U.S. Circuit Court of Appeals. Trump met with Barrett at the White House on Monday and has said he might meet with Lagoa in Florida later this week.

Romney and other Republicans have dismissed Democratic arguments that the Senate should wait until after voters decide whether to re-elect Trump or chose Democratic challenger Joe Biden in November. A Reuters/Ipsos poll published on Sunday found that a majority of Americans, including many Republicans, also want the election winner to make the nomination.

“I intend to follow the Constitution and precedent in considering the president’s nominee,” Romney said.

Ginsburg, a pioneering advocate of gender equality who served on the court for 27 years, died on Friday at age 87.

Democrats accuse Republican senators of hypocrisy, pointing out that they refused to even consider Democratic President Barack Obama’s nominee to fill a vacant Supreme Court seat in 2016 because it was an election year.

Romney said that was not a concern for him, as Washington was split between a Democratic White House and a Republican-led Senate that year, while this year Republicans control both.

“My liberal friends have over many decades gotten very used to the idea of having a liberal court. And that’s not written in the stars,” Romney told reporters.

Four Republicans would have to join the Democrats in opposing a confirmation vote to block the nomination. Only two have taken that position.

Alaska’s Lisa Murkowski and Maine’s Susan Collins said the Senate should not consider a nominee this year. Two Republican senators who had been the focus of some speculation as to their position, Cory Gardner of Colorado and Chuck Grassley of Iowa, also have made clear they support moving ahead with the confirmation process.

There is enough support among Senate Republicans to hold a vote on the nominee before Nov. 3, according to two Republican aides who spoke on condition of anonymity.

‘The institution of the Senate’

Public mourning events for Ginsburg will be held in front of the Supreme Court on Wednesday and Thursday and in the Capitol on Friday.

Ginsburg’s replacement could steer the court in a more conservative direction on abortion, healthcare, gun rights, voting access, presidential powers and other spheres of American life.

Republican Senator Rick Scott of Florida said he has spoken to Trump about Lagoa. Scott said choosing the Cuban-American judge would help Trump in the election in states with large numbers of Latinos including pivotal Florida.

Barrett is a favorite of Christian conservatives, a key constituency for Trump.

Democrats have few, if any, options for preventing a vote.

Top congressional Democrats have downplayed possibilities such as holding a second impeachment vote, withholding government funding that is due to expire on Sept. 30, or boycotting committee hearings.

“I’ve been around here a few years. You can slow things down but you can’t stop them,” Dick Durbin, the Senate’s No. 2 Democrat, told reporters.

The Senate could also vote in a lame-duck session after the election before a new Congress is sworn in on Jan. 3.