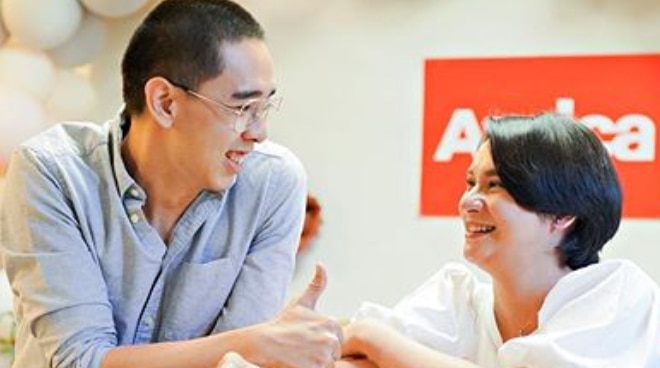 Ryza Cenon has reacted to rumors that she used her partner, Miguel Antonio Cruz, as a “rebound” after her breakup with former boyfriend, Cholo Barretto.

Ryza Cenon has reacted to rumors that she used her partner, Miguel Antonio Cruz, as a “rebound” after her breakup with former boyfriend, Cholo Barretto.

“When Miguel came into my life, it wasn’t planned and I don’t think it was a case of, as you said, ‘rebound.’ It just happened,” she said in an interview with Philippine Star editor and columnist Ricky Lo.

Ryza also explained why she didn’t formally introduce her boyfriend–a cinematographer who got his break from late director Peque Gallaga via his 2014 film “T’yanak” and who has since worked on films “Mission Unstapabol: The Don Identity” and “The Girl In the Orange Dress”–to the public prior to announcing that they are expecting a child together.

“That’s his only connection to showbiz,” explained Ryza. “But basically, Miguel is talagang non-showbiz. That’s why I said I had no boyfriend even if Miguel and I were exclusively dating maski hindi pa talaga kami noon. He was just courting me. Hindi lang detailed kung sino ba siya o ano na bang status naming dalawa.”

“Si Miguel kasi, napakamahiyain niyang tao. As in takot siya sa tao. We are both introvert that’s why I understand him. ‘Yung respeto ko sa kanya, sobrang laki. So whatever he wants or plans for our magiging family, kaya kung ano man ‘yung gusto niyang mangyari, rerespetuhin ko ‘yon. I won’t argue with him. He’s the boss,” she added.

According to Ryza, she and Miguel exclusively dated for six months before they decided to be official.

READ: ‘We’re lucky to have you’: Ryza Cenon pens sweet message for partner

Ryza said that dating a man who is not from show business has changed her outlook in life.

“I also enjoyed having a showbiz boyfriend but mas enjoy ako with a non-showbiz boyfriend, especially a very private man like Miguel, kasi you don’t share too much of your personal life with the public,” she said.

It was last July when Ryza announced that she and Miguel are expecting their first child.

According to “The General’s Daughter” star, Miguel has been supportive of her needs “physically, emotionally, and financially.”

Asked whether she sees herself marrying her partner, Ryza said: “Siya, ready pakasalan ako. Me kasi, I think it’s too early for that pa. Focus muna kami sa baby. We are doing the reverse, baby muna bago kasal. Hehehe!