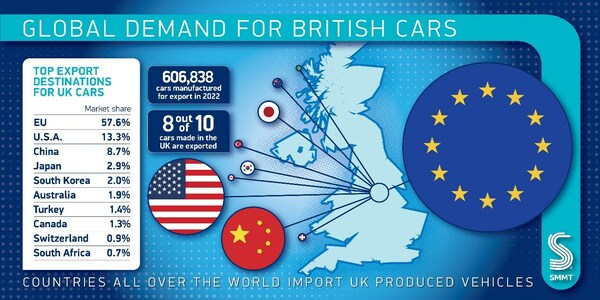 LONDON, Jan. 26, 2023 /PRNewswire/ — UK car production declined -9.8% in 2022 to 775,014 units, according to the latest figures issued today by the Society of Motor Manufacturers and Traders (SMMT). December rounded off a volatile year, with output down -17.9% in the month after growth in October and November, with most of the year’s volume loss occurring in the first half.

The annual total was 84,561 units down on 2021 and -40.5% off the 1,303,135 cars made in 2019 pre-pandemic, equivalent to a loss of more than half a million cars.1 The main reasons for the depressed output were the crippling global shortage of semiconductors, which limited the ability to build cars in line with demand; significant structural changes, reflecting a loss of production at two volume manufacturing sites; and the impact of supply chain pauses in China due to Covid lockdowns.

Despite these challenges, UK factories turned out a record 234,066 battery electric (BEV), plug-in hybrid (PHEV) and hybrid (HEV) electric vehicles, with combined volumes up 4.5% year-on-year to represent almost a third (30.2%) of all car production. Total BEV production rose 4.8%, with hybrid volumes up 4.3%, and boosting output of these vehicles will be critical in the attainment of net zero, for both the UK and major overseas markets.

The figures come as fresh SMMT analysis confirms the increasingly important role of electrified vehicle production to the UK economy, especially the value of exports. Since 2017, the value of BEV, PHEV and HEV exports has risen seven-fold, from £1.3 billion to more than £10 billion. As a result, electrified vehicles represent 44.7% of the value of all UK car exports, up from a mere 4.1%. BEVs, in particular, are critical to the future prosperity of the UK, with their export value up more than 1,500%, from £81.7 million to £1.3 billion.2

The UK’s strength in specialist, luxury and performance car makers was also further underlined, with output climbing 6.6% to 32,575 units, worth an estimated total of £3.7 billion at factory gate prices, driven by a number of new launches and models in high demand from buyers around the world. These manufacturers play an important role in the development of advanced automotive technologies such as light-weighting and electrification which, in turn, can help advance wider industry.

Total annual output for the UK market grew 9.4%, but this was not enough to offset a -14.0% drop in exports. Nearly eight in 10 cars (606,838 units) were built for overseas markets, compared with 168,176 for British buyers, emphasising the importance of free and fair global trade.

The EU remained by far the sector’s largest market, even as shipments declined -10.0%, with 57.6% of exports (349,424 units) heading into the bloc. While exports to the US and China also fell, down

Mike Hawes, SMMT Chief Executive, said, “These figures reflect just how tough 2022 was for UK car manufacturing, though we still made more electric vehicles than ever before – high value, cutting edge models, in demand around the world. The potential for this sector to deliver economic growth by building more of these zero emission models is self-evident, however, we must make the right decisions now.

“This means shaping a strategy to drive rapid upscaling of UK battery production and the shift to electric vehicles based on the UK automotive sector’s fundamental strengths – a highly skilled and flexible workforce, engineering excellence, technical innovation and productivity levels that are amongst the best in Europe.”

Even amid the tough economic and political setting, UK Automotive is integral to ambitions on levelling up, delivering net zero and advancing global Britain. In 2022, publicly announced investment for the sector reached a total of £4.5 billion, with major new commitments to electrification in Crewe and Merseyside. This was down slightly from the potential £4.9 billion announced in 2021, which included the proposed development of a new battery gigafactory in the West Midlands.3

Given the global and domestic challenges, industry is looking for a dedicated framework to position the UK as one of the world’s most competitive locations for advanced automotive manufacturing. This framework must address soaring energy costs and the threat of increasing global protectionism, provide fiscal measures to encourage investment in zero emission technologies and equip the UK’s talented workforce with the right skills to deliver these vehicles.

Looking forward, the latest independent outlook expects that, with easing semiconductor shortages, UK car and light van output should rise by 15% to 984,000 units in 2023 (842,200 cars and 141,800 light vans), an uplift worth some £3.9 billion. By 2025, production volumes are projected to surpass a million vehicles.4