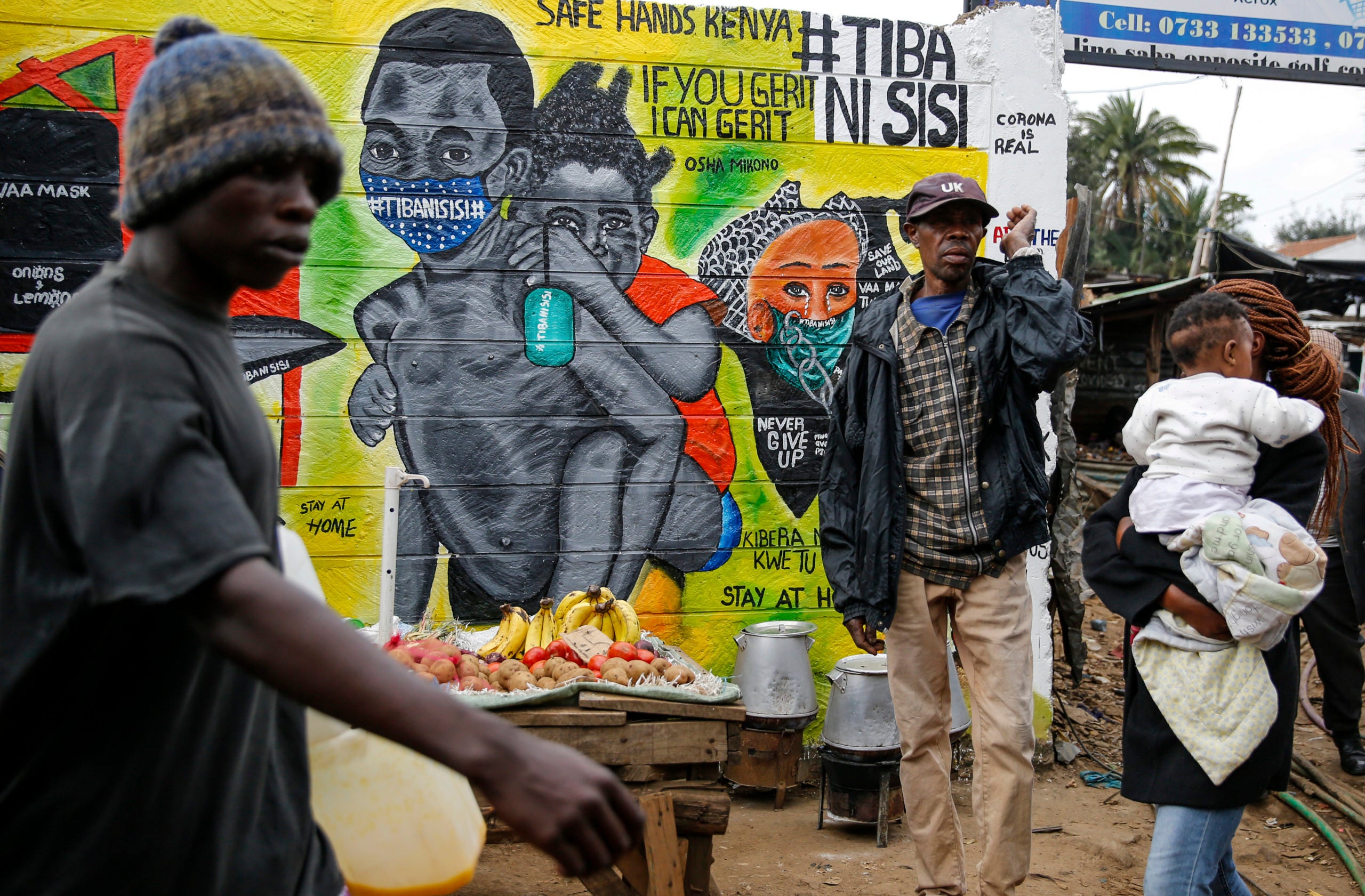 FILE – In this July 8, 2020, file photo, people walk past an informational mural warning people about the dangers of the new coronavirus and how to prevent transmission, with words in Swahili reading “We are the Cure”, painted by youth artists from the Uweza Foundation, in the Kibera slum, or informal settlement, of Nairobi, Kenya. A dangerous stigma has sprung up around the coronavirus in Africa — fueled, in part, by severe quarantine rules in some countries as well as insufficient information about the virus. (AP Photo/Brian Inganga, File)

JOHANNESBURG  — South Africa has surpassed 500,000 confirmed coronavirus cases, but President Cyril Ramaphosa said Sunday he sees “promising signs” that the rapid growth of cases has stabilized and that the country’s strained health system is managing to cope.

With a population of about 58 million, South Africa has the fifth-highest number of cases in the world, behind the U.S., Brazil, Russia, and India, all countries with significantly higher populations, according to a tally by Johns Hopkins University. Experts say the true toll of the pandemic worldwide is much higher than confirmed cases, due to limited testing and other reasons.

Ramaphosa, in a letter to the nation on Sunday, said despite the high number of confirmed cases, he sees some positive developments.

“After a rapid rise in infections over the last two months, the daily increase in infections appears to be stabilizing,” said Ramaphosa. He said the number of new infections has slowed in the provinces of the Western Cape, which includes Cape Town, the Eastern Cape, and Gauteng, which hosts the major cities of Johannesburg and Pretoria.

South Africa’s hospitals have been stretched to the limit but in most provinces, they are succeeding in providing treatment to COVID-19 patients, he said.

“The health system has so far had sufficient capacity to cope with the number of admissions,” said Ramaphosa of the hard-hit provinces of Western Cape,  Gauteng and KwaZulu-Natal. He said, however, that in the Eastern Cape several public hospitals were overwhelmed and a specialist team has been deployed to help.

He said his government is working hard with “greatest urgency” to deliver adequate supplies of personal protective equipment to areas where shortages have been reported. South African authorities are also working to root out corruption in the purchase and distribution of medical equipment, he said.

“It is unconscionable that there are people who may be using this health crisis to unlawfully enrich themselves,” said Ramaphosa.

South Africa’s case fatality rate – the number of deaths as a proportion of confirmed cases – is at 1.6%, significantly lower than the global average, said Ramaphosa.

“While South Africa has the fifth-highest number of total COVID-19 cases globally, we have only the 36th highest number of deaths as a proportion of the population,” said Ramaphosa. “For this, we are grateful to the work of our health professionals and the innovative treatments they have pioneered.”

South Africa also has a younger population than countries in Europe that were hard hit in the pandemic, and the virus kills elderly patients at a far higher rate than younger people.