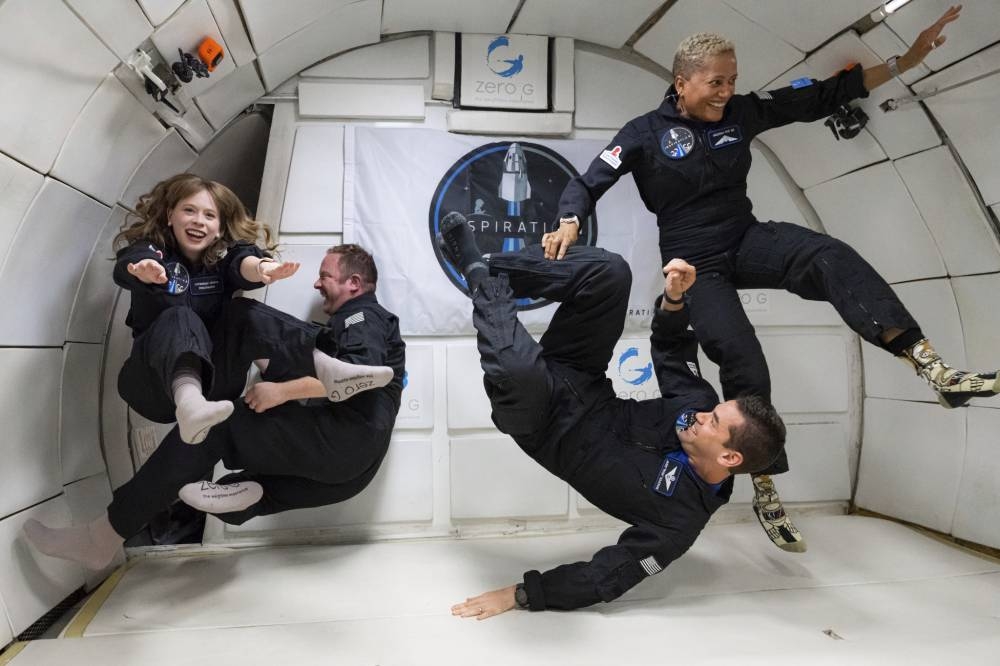 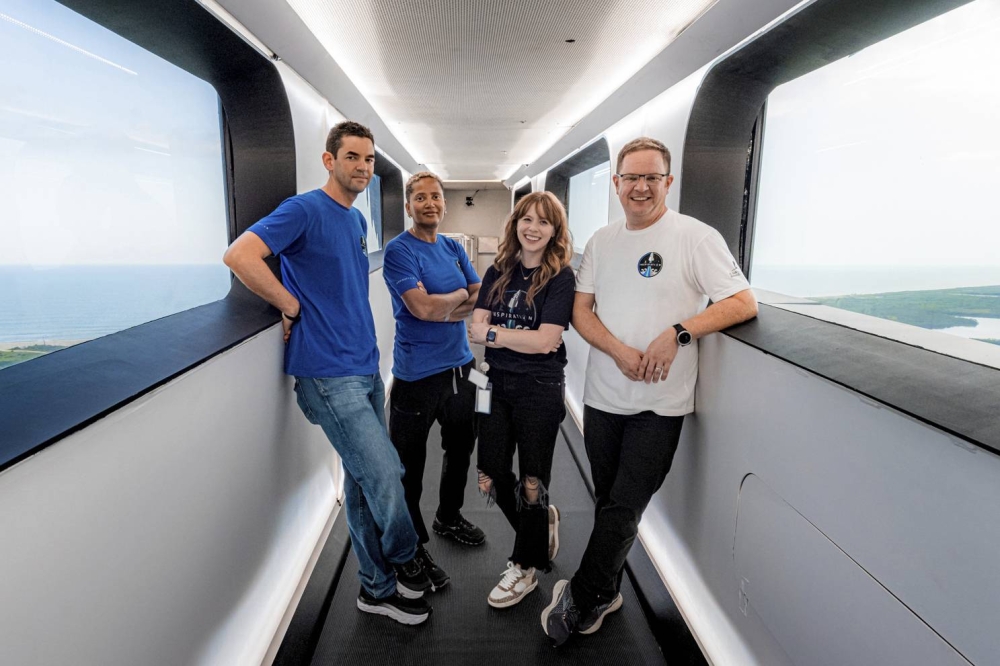 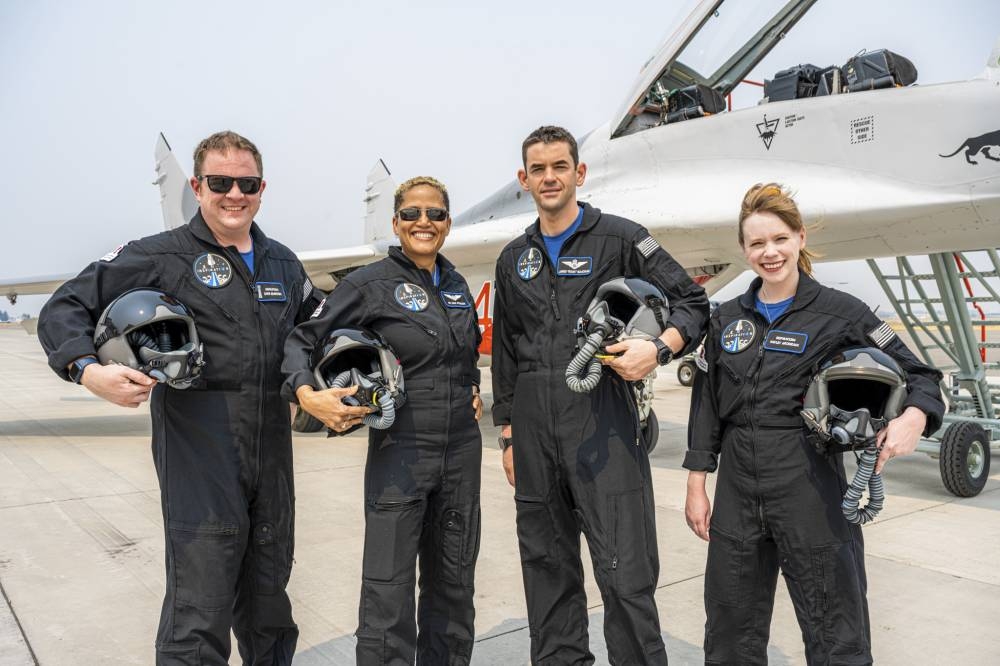 In this Aug. 8, 2021 photo provided by John Kraus (from left) Chris Sembroski, Sian Proctor, Jared Isaacman and Hayley Arceneaux stand for a photo in Bozeman, Mont., during a “fighter jet training” weekend to familiarize the crew with G-forces. PHOTO BY JOHN KRAUS/ INSPIRATION4 VIA AP

In this July 11, 2021 photo provided by John Kraus (from left) Hayley Arceneaux, Chris Sembroski, Jared Isaacman and Sian Proctor float during a zero gravity flight out of Las Vegas. The plane, a modified Boeing 727, flies multiple parabolic arcs to provide 20-30 seconds of weightlessness. PHOTO BY JOHN KRAUS/ INSPIRATION4 VIA AP 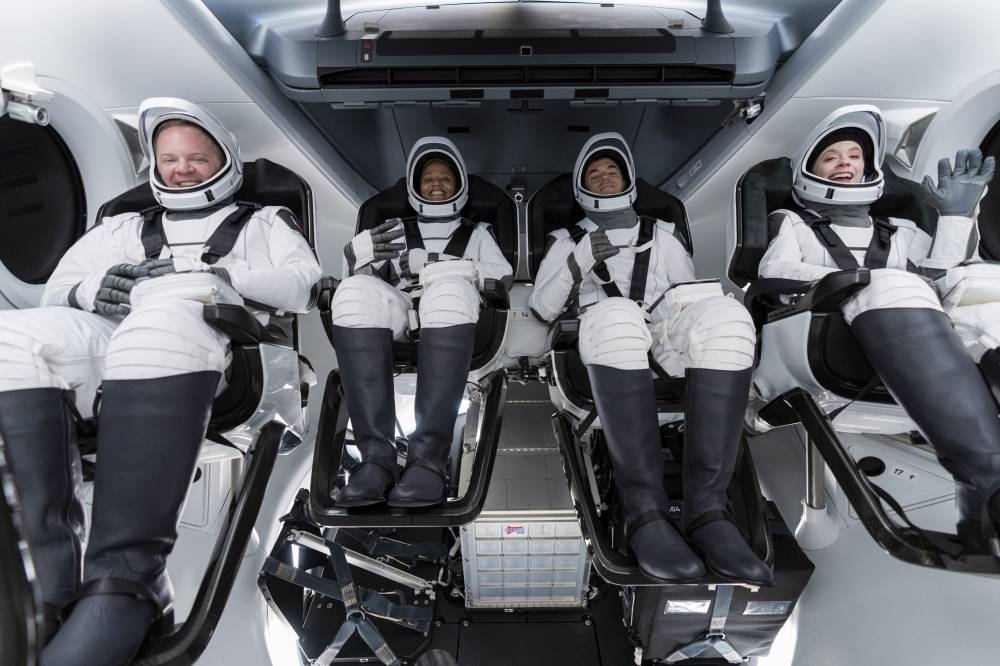 In this Sunday, Sept. 12, 2021 photo made available by SpaceX (from left) Chris Sembroski, Sian Proctor, Jared Isaacman and Hayley Arceneaux sit in the Dragon capsule at Cape Canaveral in Florida, during a dress rehearsal for the upcoming launch. SPACEX VIA AP

KENNEDY SPACE CENTER: The weather seems cooperative and the passengers are raring to go: SpaceX’s first space tourists were a picture of calm Tuesday as they prepared to blast off on a three-day mission to orbit the Earth.

“No jitters, excited to get going!” American billionaire Jared Isaacman told reporters when asked his state of mind at a press conference.

Behind him towered the giant Falcon 9 rocket, which will carry the four-member, all civilian crew for the mission, dubbed Inspiration4.

“Any jitters are the good kind,” added 29-year-old physician assistant Hayley Arceneaux. “I’m just so excited for tomorrow to get here.” Chris Sembroski, a 42-year-old Air Force veteran, even compared the extraordinary voyage to a “camper van” ride.

He’s not far off: the interior of the Dragon Capsule offers its occupants a cramped eight by four meters (27 by 13 feet) of space.

“You just wrap yourself in (sleeping bags) so you don’t float into each other during the middle of the night!” he joked.

They all said they got along well, even though they didn’t know each other before they started training only about six months ago.

Isaacman, who chartered the mission at his expense, ran a competition to choose the three joining him.

“Since the announcement… every day has been the best day of my life, and it’s only getting better,” declared Sian Proctor, a 51-year-old geology professor who will become the first African American woman to assume the role of “pilot” on a spaceflight.

Clearly moved by the occasion, she shared that she and the crew had had a phone chat with former first lady Michelle Obama.

“We had a very nice conversation that will stay with you for the rest of my life.” A take-off window begins at 8:02pm Wednesday (0002 GMT Thursday).