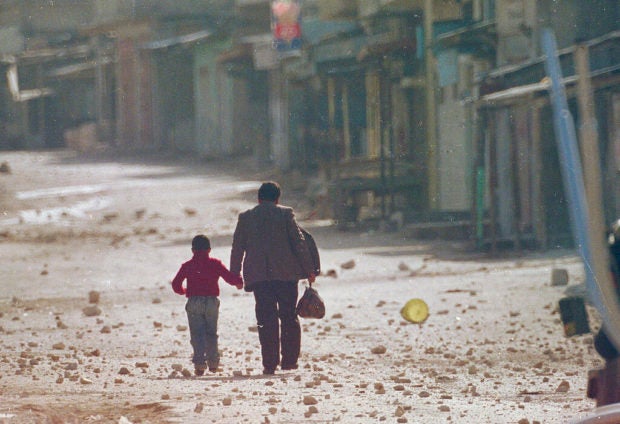 In this Dec. 11, 1987 file photo, a man holds his son’s hand as they make their way along a debris littered street in the Balata refugee camp near Nablus in the occupied West Bank after a curfew was imposed on the camp. Western countries are reeling from the coronavirus pandemic, awakening to a new reality of economic collapse, overwhelmed hospitals and home confinement. But for millions across the Middle East and in conflict zones elsewhere, much of this is familiar. AP

GAZA CITY, Gaza Strip — As Western countries reeling from the coronavirus pandemic awaken to a new reality of economic collapse, overwhelmed hospitals, grounded flights and home confinement, it’s tempting to think the end of days is at hand.

But for millions across the Middle East and in conflict zones farther afield, much of this is grimly familiar. The survivors of recent wars, too often dismissed as the pitiable victims of failed states, can offer hard-earned wisdom in times like these.

Few have more experience with lockdowns and closures than the Palestinians. During the uprising known as the Second Intifada in the early 2000s, Israel shut down parts of the occupied West Bank and Gaza for weeks on end, using checkpoints and curfews to try to quash it.

In 2002, Israel imposed an around-the-clock curfew in Bethlehem for weeks as troops battled Palestinian militants holed up in the Church of the Nativity, built on the site revered by Christians as Jesus’ birthplace.

Jamal Shihadeh remembers being stuck in his home for 25 days before he slipped out and fled to a nearby Jewish settlement in order to work. He ended up sleeping in the factory until the closures were lifted.

Now he is stuck at home again. Israel and the Palestinian Authority sealed off Bethlehem and severely restricted movement after several residents and tourists tested positive for the coronavirus.

The virus causes only mild symptoms in most patients, who recover in a matter of weeks. But it is highly contagious and can cause severe illness, including pneumonia, particularly in older patients or those with underlying health problems.

Now he and his wife and sons, who have been stuck at home since March 5, live much the same way he did in 2002. They watch the news and Arab soap operas on TV, they play cards and socialize, and they wait for the situation to improve.

‘Other things were not important’

The Gaza Strip has been under an Israeli and Egyptian blockade since the Islamic militant group Hamas seized power in 2007. Travel in or out is heavily restricted, and many Palestinians were trapped in their homes for days or weeks at a time during the three wars Hamas has fought with Israel.

During the 2008-2009 war, Mohammed al-Attar awoke one morning to the sound of tanks, aircraft and gunfire. By then, much of his extended family had gathered on the ground floor, with about 80 people sleeping in the living room, kitchen and other areas away from outer walls or windows.

The family had stocked up on mattresses and basic goods, but after five days they raised white flags and were evacuated to a school that had been turned into a shelter.

“We were just praying for it to stop and that we would stay alive,” he said. “Other things were not important.”

Gaza has only reported two coronavirus cases, but there are fears that even a small outbreak could overwhelm its health care system. There are only about 60 ventilators in the territory of 2 million, and most of the breathing machines are already in use by patients with other ailments.

Long before the pandemic, Gazans were forced to adapt to daily hardships. Most only have a few hours of electricity a day, the tap water is undrinkable, and the unemployment rate is about 50%. It’s almost always been difficult to leave, even for those who can afford it, and now the borders with Israel and Egypt are sealed.

‘We expect it to happen to us’

In Sarajevo, the lockdowns have revived painful memories of when the city was besieged for 46 months during the Balkan wars in the 1990s.

Bosnian Serb fighters were deployed on the surrounding hillsides and pounded the city with artillery fire. There were severe shortages of food, water and electricity, and snipers gunned down those who ventured out.

And then it happened to them.

Aida Begic, a filmmaker who was a teenager at the time, recalls how even after fighting began in other parts of the country, no one in Sarajevo thought it would reach them.

Now, many are drawing on lessons from the war. Some are buying wood-burning stoves, seed potatoes and onions. Begic knows people who have bought up to 40 kilograms (90 pounds) of flour.

“Someone who hasn’t had our experience may not remember that they must buy extra face cream and other similar everyday products,” she said. “We remember the things we missed during the war.”

‘AN ENEMY THAT WE DON’T KNOW’

The comparisons with wartime lockdowns only go so far, as those who have lived through both readily acknowledge.

Hanaa al-Yemen, a 55-year-old mother of three in Lebanon’s port city of Sidon, lived through her country’s 1975-1990 civil war and various other bouts of violence, including the 2006 war between Israel and the Hezbollah militant group.

But she said the coronavirus pandemic, and the countrywide lockdown imposed to contain it, is like nothing she’s ever experienced.

“We used to be so scared of the warplanes and the random shelling, but we could still go out at times and work,” she said. “Today there is an enemy and a danger that we don’t know, we can’t see or touch it, and it can strike us or a member of our family at any time.”

In Cuba, which is under a 30-day lockdown, many have become masters of self-sufficiency through decades of U.S. sanctions and several periods of severe stagnation in the centrally planned economy.

“We’re always storing things,” said Taimy Martinez, a 41-year-old administrator in a state-run business. “If we have chicken, we use it little by little. If we have money to buy canned food, we do. Sugar, a bit of bread to make toast, we make it last.”

“I can endure a three-week quarantine if we start today,” she said.

In the disputed Himalayan region of Kashmir, lockdowns have been a fact of life for decades. Pakistan and India have split the region in two, each claiming it in its entirety, while residents have long demanded independence or union with Pakistan. 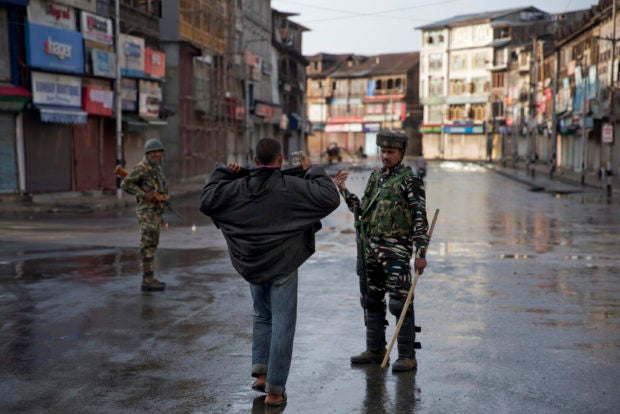 In this Aug. 8, 2019 file photo, an Indian paramilitary soldier orders a Kashmiri to lift his robe before frisking him during curfew in Srinagar, Indian controlled Kashmir. Western countries are reeling from the coronavirus pandemic, awakening to a new reality of economic collapse, overwhelmed hospitals and home confinement. But for millions across the Middle East and in conflict zones elsewhere, much of this is familiar. Survivors of recent conflicts offer wisdom, such as stocking up on essentials, helping your neighbors and knowing that others have gone through much worse. AP

Last August, India stripped the region of its semi-autonomy. Fearing mass protests or a full-blown uprising, it ordered the region’s 7 million people to stay indoors for months and imposed an information blackout, cutting off internet and even phone service. Indian troops arrested thousands in anticipation of protests.

It’s happened before, and Kashmiris have learned to make the best of it.

“I can enumerate at least half a dozen things which curfews and security lockdowns have taught us,” said Sajjad Ahmed, a schoolteacher.

He says volunteers have mobilized to help the elderly and infirm. Parents have learned to home-school their children, and nearly everyone has mastered basic first aid, often by treating those wounded in clashes with security forces.

When extended families are stuck inside for weeks or months at a time, they share stories, imparting a sense of history that can provide strength in times of turmoil.

“It helped us to rediscover the family and social talk,” Ahmed said.