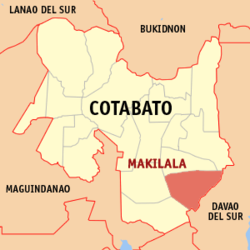 A report from Brig. Gen. Adonis Bajao, commander of the 1002nd Infantry Brigade to the Eastern Mindanao Command, identified the suspect as Juanita Gore Tacadao, who is believed to be a ranking logistics and finance head of the NPA.

Tacadao was killed during the encounter between her security escorts and elements of the 39th Infantry Battalion and the Makilala Police Office.

The gunbattle happened as the authorities were about to serve Tacadao arrest warrants for murder and robbery with intimidation and violence against persons.

According to the military, Tacadao’s security escorts fled to an unknown direction, leaving Tacadao’s body behind.

Seized at the encounter site were an  M14 rifle, a caliber .38 pistol; a landmine; two blasting caps and a detonating cord.

2 boys killed as rifle grenade they thought was toy exploded