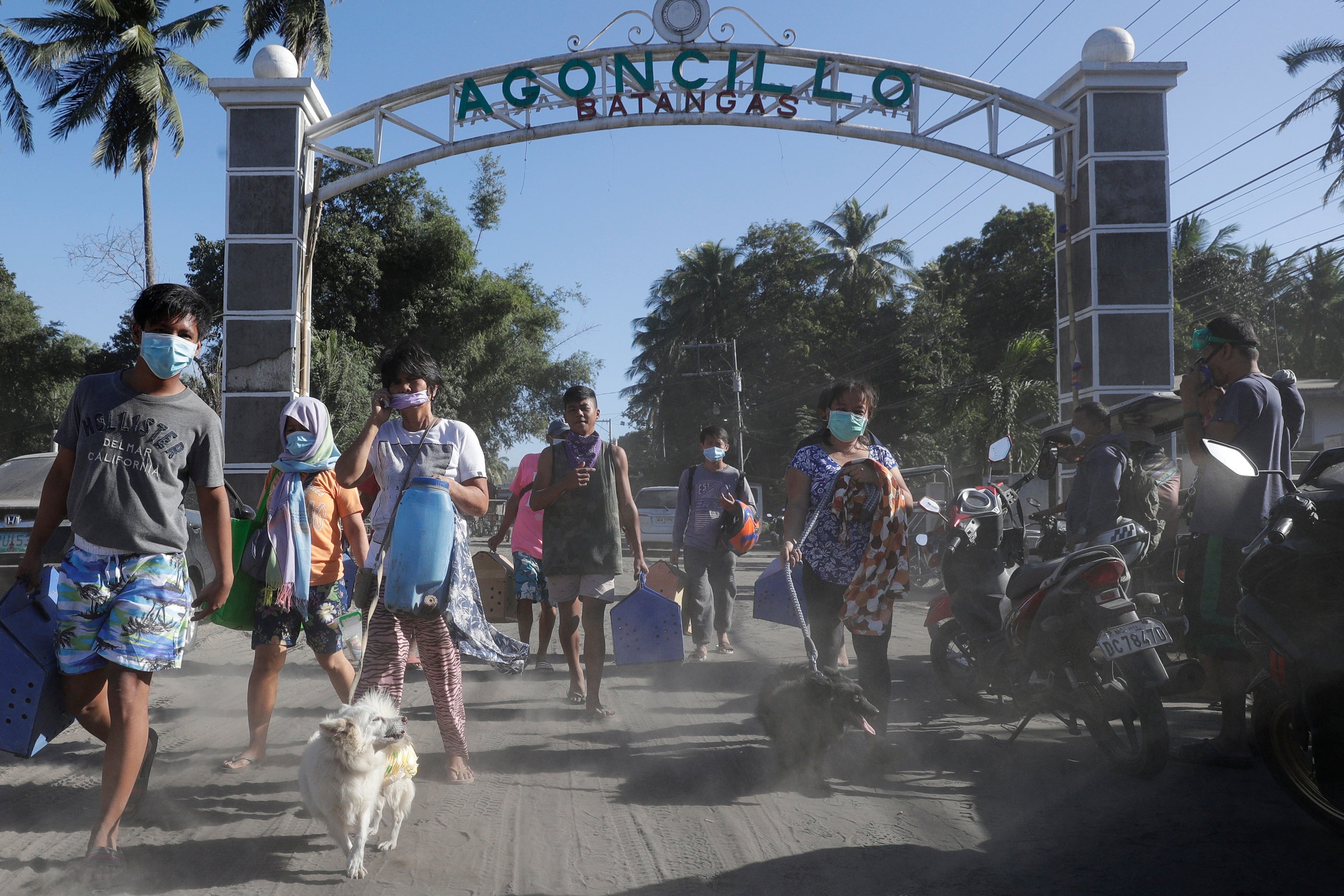 A family walks with their belongings and pets as authorities enforced total evacuation of residents living near Taal volcano in Agoncillo town, Batangason  Thursday. (AP)

LEMERY, Batangas — Taal Volcano belched smaller plumes of ash and shuddered continuously with earthquakes Thursday, prompting authorities to block access to nearby towns due to fears of a bigger eruption.

A crater lake and nearby river on the Taal volcano dried up in signs of its continued restiveness, and officials have warned people against speculating the five-day eruption is waning.

Soldiers and police blocked villagers from going back to the island volcano and nearby towns to retrieve belongings, poultry and cattle.

“Activity in the past 24 hours has generally waned to weak emission of steam-laden plumes,” the Philippine Institute of Volcanology and Seismology said. But the region remained just a notch down from the highest level of alert the agency could issue if the volcano erupts more violently.

Many houses and farms have been damaged by volcanic ash since the eruption started Sunday, though no deaths or major injuries have been reported after tens of thousands of people evacuated.

A 65-year-old woman died of a heart attack while being moved out of Taal town in Batangas province but officials said she had been ill and may have been stressed by the calamity. Batangas province lies more than 65 kilometers (40 miles) south of the capital, Manila.

Amid warnings of an imminent and more dangerous eruption, police cordoned off at least four towns near shores of a lake that surrounds the volcano. The move sparked arguments with villagers.

“We’ve lost everything. Our house got damaged. But I need to retrieve my pots and cooking wares and other things. They should not be very, very strict,” 59-year-old Erlinda Landicho told The Associated Press.

Landicho, who fled with her son from Lemery municipality as the volcano erupted, was among a throng of villagers stopped by police from reentering the ash-blanketed town. A firetruck blocked a key access road and police set up checkpoints. Beyond the barricade, Lemery looked like a ghost town partly shrouded in swirling ash.

More than 125,000 people fled their homes just in Batangas, which has declared a state of calamity to allow the faster release of emergency funds. At least 373 evacuation sites were crammed with displaced villagers and needed more ash masks, portable toilets, bottled water and sleeping mats, according to a provincial disaster-response office.

The government’s main-disaster agency reported a little more than 68,000 people were displaced by the eruption in Batangas and Cavite provinces. The reason for the discrepancy was not immediately clear.

Cavite was also placed under a state of calamity after being swamped by thousands of displaced villagers from nearby Batangas.

Among those displaced were about 5,000 people who live on the island where the Taal volcano lies.

The island is a popular tourist destination renowned for its stunning view of the volcano’s crater lake and lush hills teeming with trees and birds. Some villagers have slipped past checkpoints to retrieve some of the hundreds of cows and horses they left behind, prompting the coast guard and police to intensify a security cordon.

About four villages exist on the island despite it being a permanent danger zone. Defense Secretary Delfin Lorenzana has recommended that villagers should not be allowed back.

The 1,020-foot (311-meter) Taal is one of the world’s smallest volcanoes but also the second-most restive of about two dozen active volcanoes across the Philippines. The Southeast Asian archipelago lies in the so-called Pacific Ring of Fire, the string of faults around the ocean basin where most of the world’s earthquakes and volcanic eruptions occur. 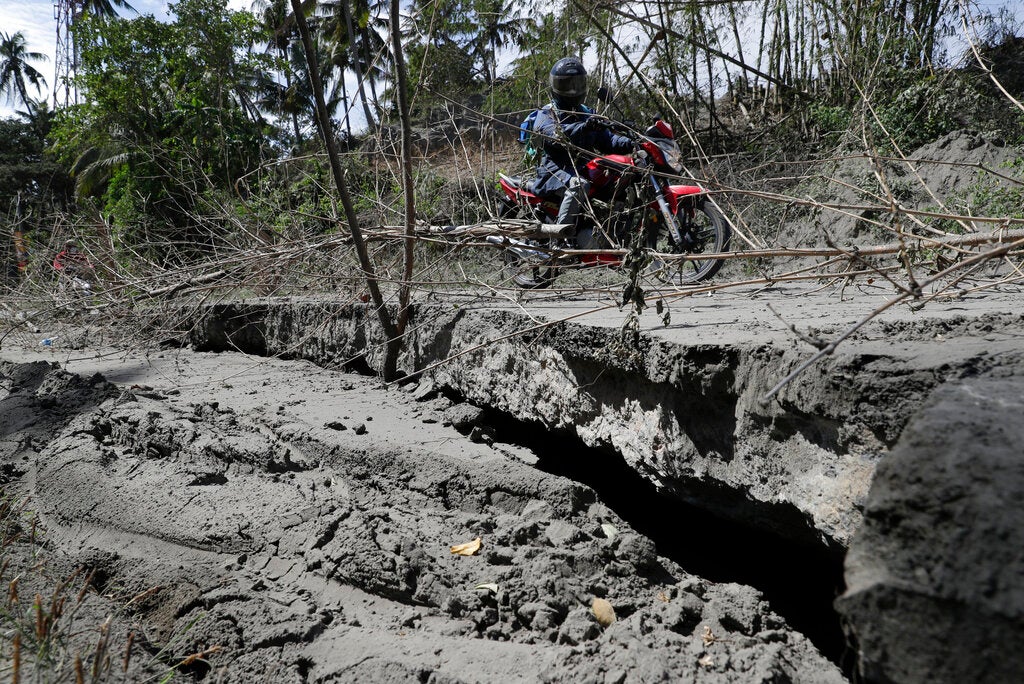 A motorcycle rider negotiates a crack on the road  in Lemery, Batangas. (AP)