Using machine learning to provide an algorithmic approach to the abundant data generated by the Transiting Exoplanet Survey Satellite (TESS) has proven unusually productive. I’m looking at an odd object called TIC 400799224, as described in a new paper in The Astronomical Journal from Brian Powell (NASA GSFC) and team, a source that displays a sudden drop in brightness – 25% in a matter of four hours – followed by a series of brightness variations. What’s going on here?

We’re looking at something that will have to be added to a small catalog of orbiting objects that emit dust; seven of these are presented in the paper, including this latest one. The first to turn up was KIC 12557548, whose discovery paper in 2012 argued that the object was a disintegrating planet emitting a dust cloud, a model that was improved in subsequent analyses. K2-22b, discovered in 2015, showed similar features, with varying transit depths and shapes, although no signs of gas absorption..

In fact, the objects in what we can call our ‘disintegrating planet catalog’ are rather fascinating. WD 1145+017 is a white dwarf evidently showing evidence for orbiting bodies emitting dust, with masses of each found to be comparable to our Moon. These appear to be concentrations of dust rather than solid bodies. And another find, ZTF J0139+5245, may turn out to be a white dwarf orbited by extensive planetary debris.

So TIC 400799224 isn’t entirely unusual in showing variable transit depths and durations, a possibly disintegrating body whose transits may or may not occur when expected. But dig deeper and, the authors argue, this object may be in a category of its own. This is a widely separated binary system, the stars approximately 300 AU apart, and at this point it is not clear which of the two stars is the host to the flux variations. The light curve dips are found only in one out of every three to five transits.

All of this makes it likely that what is occulting the star is some kind of dust cloud. Studying the TESS data and following up with a variety of ground-based instruments, the authors make the case: One of the stars is pulsating with a 19.77 day period that is probably the result of an orbiting body emitting clouds of dust. The dust cloud involved is substantial enough to block between 37% and 75% of the star’s light, depending on which of the two stars is the host. But while the quantity of dust emitted is large, the periodicity of the dips has remained the same over six years of observation. 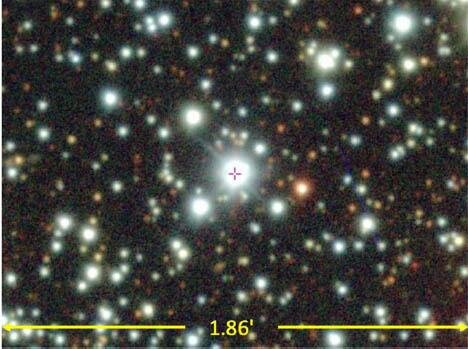 Image: An optical/near-infrared image of the sky around the TESS Input Catalog (TIC) object TIC 400799224 (the crosshair marks the location of the object, and the width of the field of view is given in arcminutes). Astronomers have concluded that the mysterious periodic variations in the light from this object are caused by an orbiting body that periodically emits clouds of dust that occult the star. Credit: Powell et al., 2021.

How is this object producing so much dust, and how does it remain intact, with no apparent variation in periodicity? The authors consider sublimation as a possibility but find that it doesn’t replicate the mass loss rate found in TIC 400799224. Also possible: A ‘shepherding’ planet embedded within the dust, although here we would expect more consistent light curves from one transit to the next. Far more likely is a series of collisions with a minor planet. Let me quote the paper on this:

A long-term (at least years) phase coherence in the dips requires a principal body that is undergoing collisions with minor bodies, i.e., ones that (i) do not destroy it, and (ii) do not even change its basic orbital period. The collisions must be fairly regular (at least 20–30 over the last 6 years) and occur at the same orbital phase of the principal body.

This scenario emerges, in the authors’ estimate, as the most likely:

Consider, for example, that there is a 100 km asteroid in a 20 day orbit around TIC 400799224. Further suppose there are numerous other substantial, but smaller (e.g., ≲1/10th the radius), asteroids in near and crossing orbits. Perhaps this condition was set up in the first place by a massive collision between two larger bodies. Once there has been such a collision, all the debris returns on the next orbit to nearly the same region in space. This high concentration of bodies naturally leads to subsequent collisions at the same orbital phase. Each subsequent collision produces a debris cloud, presumably containing considerable dust and small particles, which expands and contracts vertically, while spreading azimuthally, as time goes on. This may be sufficient to make one or two dusty transits before the cloud spreads and dissipates. A new collision is then required to make a new dusty transit.

Amateur astronomers may want to see what they can learn about this object themselves. The authors point out that it’s bright enough to be monitored by ‘modest-size backyard telescopes,’ allowing suitably equipped home observers to look for transits. Such transits should also show up in historical data, giving us further insights into the behavior of the binary and the dust cloud producing this remarkably consistent variation in flux. As noted, the object in question evidently remains intact.

Digression: I mentioned earlier how much machine learning has helped our analysis of TESS data. The paper makes this clear, citing beyond TIC 400799224 such finds as:

Algorithmic approaches to light curves are becoming an increasingly valuable part of the exoplanet toolkit, about which we’ll be hearing a great deal more.