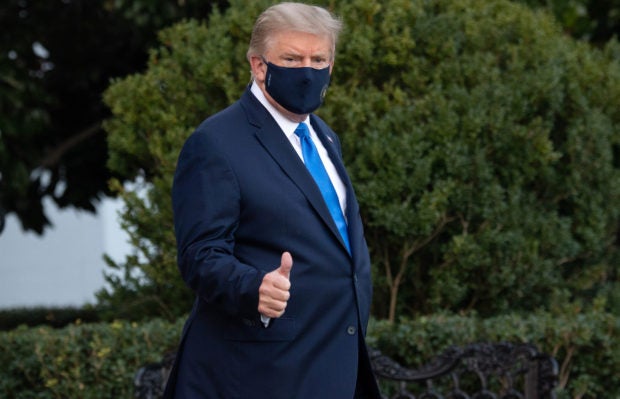 WASHINGTON, D.C.   – US President Donald Trump will give a public speech at the White House on Saturday for the first time since testing positive for COVID-19, and will also hold a Florida rally next week in an attempt to relaunch his stumbling reelection campaign with only 25 days to go.

Knocked off the campaign trail by his hospitalization for three nights last week, the president is in the midst of a frenetic bid to catch up with surging Democratic challenger Joe Biden.

On Friday, during an extended media blitz, he falsely claimed that Covid-19 now has a cure.

He also revealed that he’d been told he was near death at the worst of his bout with the virus, which has killed more than 210,000 Americans and severely dented his chances of winning a second term on November 3.

Saturday’s speech, which a senior administration official said would be on Trump’s favored theme of “law and order,” will give him a chance to dispel lingering doubts about his health. The crowd will be on the South Lawn of the White House, while the president will stand up on the balcony, the official said, confirming US media reports.

And on Monday, Trump will take another big step by holding a rally in Sanford, in the crucial electoral state of Florida, his campaign said.

The events come despite continued questions over how sick Trump was last week and how complete his recovery is now, with White House officials refusing to answer basic queries including the date on which the president first contracted the virus and whether he has tested negative since.

‘Better than a vaccine’

On Friday, Trump gave a marathon interview to right-wing talk radio host Rush Limbaugh in which he said the experimental Regeneron antibody cocktail that he took as part of therapeutic treatment was “a cure.”

It’s “a total game changer” and “better than a vaccine,” he said.

In fact, there is no cure and still no approved vaccine for the coronavirus.

Trump repeatedly asserted that he feels fine and he has been backed up by statements from the presidential physician, Sean Conley.

But in his Limbaugh interview, Trump suggested for the first time that he had been close to death, had it not been for the therapeutic drugs.

“I’m talking to you today because of it. I could have been a bad victim,” he said, referring to friends of his who had died from Covid-19.

Trump said that doctors told him afterward, “you were going into a very bad phase.”

“You know what that means,” said the president.

According to Conley, Trump is now fit for a “safe return to public engagement” from Saturday.

Trump has tried to fill the gap left by his enforced absence from the campaign trail by making back-to-back appearances on friendly media outlets.

He twice spoke at length on Fox on Thursday and was due back on Fox’s Tucker Carlson Tonight show late Friday, appearing from the White House where he was to undergo what the network described as an on-air “medical evaluation,” conducted remotely by Fox contributor Doctor Marc Siegel.

Biden, however, is already picking up the pace of travel, with a stop in Nevada on Friday after going to Arizona on Thursday.

Polls show Biden leads heavily in key demographics including women and the elderly, prompting analysts to talk increasingly of a possible landslide victory.

Trump’s biggest liability — overwhelming public dissatisfaction over his handling of the coronavirus crisis — has returned as the headline issue of the campaign thanks to the president’s own infection.

Adding to the pressure, congressional Democrats who control the House of Representatives unveiled plans for a commission to investigate a president’s physical and mental fitness for the job — a move clearly meant to jab at Trump.

The speaker of the House, Nancy Pelosi, said it was time to examine Trump’s “disassociation from reality.”