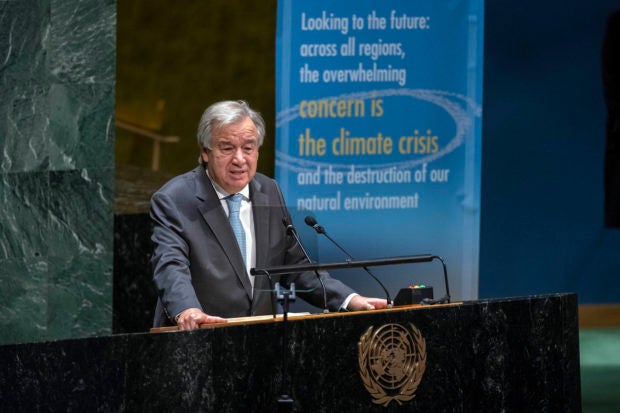 UNITED NATIONS — Secretary-General Antonio Guterres warned the U.N.’s first-ever virtual meeting of global leaders Tuesday that the world is facing an “epochal” health crisis, the biggest economic calamity and job losses since the Great Depression, threats to human rights and worries of a new Cold War between the U.S. and China.

In his grim state of the world speech to the U.N. General Assembly’s annual high-level meeting, the U.N. chief said that the coronavirus that “brought the world to its knees” was but “a dress rehearsal for the world of challenges to come.”

He called for global unity, first and foremost to fight the pandemic, and sharply criticized populism and nationalism for failing to contain the virus, and for often making things worse.

Guterres called for a global ceasefire on March 23 to tackle the pandemic, and he appealed for a 100-day push by the international community, led by the Security Council, “to make this a reality by the end of the year.”

“There is only one winner of conflict during a pandemic: the virus itself,” he stressed.

Reiterating a warning he made to world leaders a year ago about increasing U,S.-China rivalrly, he said, “We are moving in a very dangerous direction.”

“Our world cannot afford a future where the two largest economies split the globe in a Great Fracture — each with its own trade and financial rules and internet and artificial intelligence capacities,” Guterres said. “A technological and economic divide risks inevitably turning into a geo-strategic and military divide. We must avoid this at all costs.”

Guterres said armed movements from Cameroon to Colombia, the Philippines and beyond responded to his original appeal even if several cease-fires they announced weren’t sustained. But there are reasons to be hopeful, he said, pointing to a new peace agreement in Sudan, the launch of Afghan peace negotiations, and cease-fires largely holding in Syria’s Idlib province, Ukraine and elsewhere.

“The world needs a global cease-fire to stop all `hot’ conflicts,” Guterres said. “At the same time, we must do everything to avoid a new Cold War.”

The U.N. chief delivered his speech in the vast General Assembly Hall, where only one mask-wearing diplomat from each of the U.N.’s 193 member nations was allowed, spread out in the chamber.

“In a world turned upside down, this General Assembly Hall is among the strangest sights of all,” Guterres said. “The COVID-19 pandemic has changed our annual meeting beyond recognition. But it has made it more important than ever.”

Among those speaking Tuesday are U.S. President Donald Trump and Brazilian President Jair Bolsonaro, whose countries have reported the highest and second-highest coronavirus death tolls, respectively. Also on deck are President Xi Jinping of China, where the virus originated, and President Vladimir Putin of Russia, which has raised international eyebrows with its rapid vaccine development.

After Monday’s introductory session marking the U.N.’s 75th anniversary, the meeting’s central event — speeches from each of its 193 member nations — kicked off on Tuesday. Such meetings traditionally serve as a platform for countries to tout accomplishments, seek support, stoke rivalries and express views on global priorities.

This year, the platform is online, and there is a pressing new priority in the pandemic that has killed over 960,000 people worldwide.

“When we met in New York a year ago, no one could have imagined that 2020 would arrange such a powerful crash test for our world,” Ukrainian President Volodymyr Zelenskiy remarked in his video speech for Monday’s anniversary commemoration.

By custom, Brazil speaks first and the U.S. second as the host country in the annual meeting’s “general debate,” which is generally less a dialogue than a series of declarations.

The coronavirus has inflicted heavy tolls on both countries, close to 200,000 people in the U.S. and over 136,000 in Brazil, according to statistics collected by Johns Hopkins University.

Both Bolsonaro and Trump have been at odds, at least at times, with governors and health experts over the pandemic and have emphasized the economic consequences of shutdowns.

Both also are contending with plenty of other issues that command world attention, including Bolsonaro’s plans to develop the Amazon and Trump’s 2018 decision to pull the U.S. out of Iran’s nuclear deal with world powers. Washington took a further step this weekend with a unilateral, and disputed, declaration that all U.N. penalties eased under the 2015 nuclear deal had been restored, setting up a likely showdown at the assembly — where Iran’s speech is also scheduled Tuesday.

So is Turkey’s, a day after President Recep Tayyip Erdogan said the U.N. has “flunked during the pandemic.”

The virus was first detected in Wuhan, China, late last year. After building field hospitals and imposing a draconian 76-day lockdown to battle the virus there, China has said of late that it is seeing relatively few cases, mostly among people arriving from other countries. China, the world’s most populous nation, has reported over 4,700 deaths.

Russia, where the death toll is over 19,000, last month became the first country to approve a vaccine for the COVID-19 virus. Russian President Vladimir Putin trumpeted the development, saying one of his adult daughters had already been inoculated. But international health experts have expressed caution about the vaccine’s effectiveness and safety because of the small study sample and other limitations.

A record number of heads of states and governments are due to speak at the virtual meeting, rather than sending ministers or diplomats. That’s a good thing, “but the idea that prime ministers and presidents are going to be sitting at home with a bucket of popcorn watching each other’s televised speeches is a bit silly,” said Richard Gowan, who oversees U.N. issues for Crisis Group, a Brussels-based think tank.

Still, German U.N. Ambassador Christoph Heusgen sees the assembly as a chance for a global meeting of minds when it’s needed more than ever.

“Even in a digital format, UNGA-75 is an opportunity — especially in the face of international conflicts and dramatic challenges such as climate change or COVID-19,” he said.