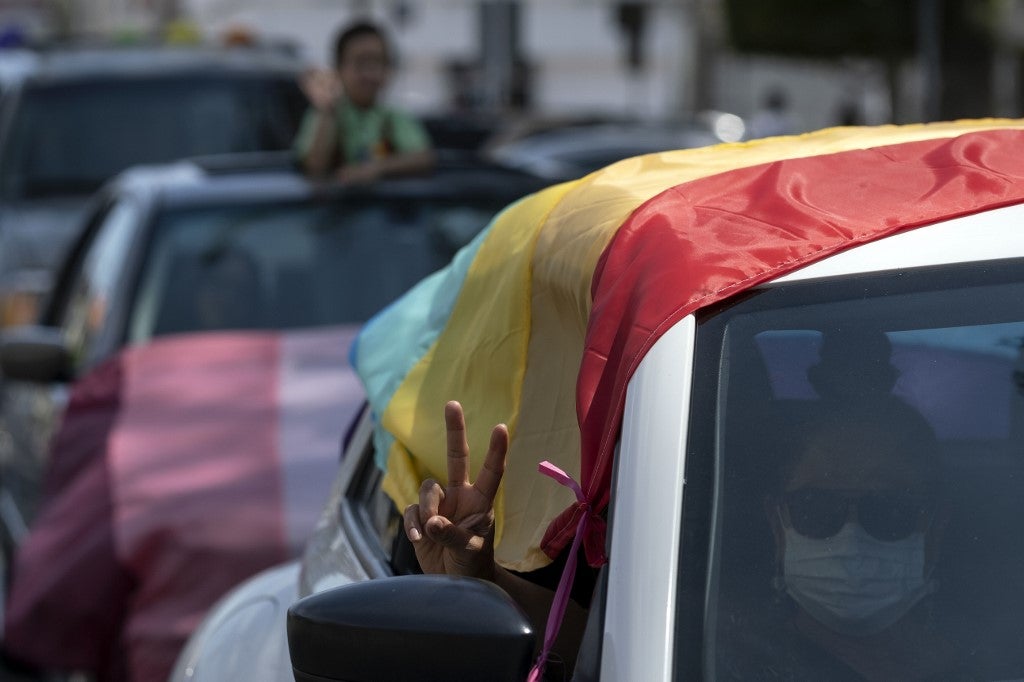 A reveler flashes the V sign from a car during a motorcade to celebrate gay pride in Tijuana, Baja California state, Mexico, on June 28, 2020.  (Photo by Guillermo Arias / AFP)

A United Nations rights expert called Wednesday for a global ban on “conversion therapy” aimed at changing the sexuality of LGBT people, calling such practices “degrading and discriminatory.”

Victor Madrigal-Borloz, the independent expert on protection against violence and discrimination based on sexual orientation and gender identity, made the call as he presented a report to the UN Human Rights Council in Geneva.

In a statement, he said such practices “inflict severe pain and suffering on lesbian, gay, bisexual, trans and gender-diverse (LGBT) persons, often resulting in long-lasting psychological and physical damage”.

United Nations independent experts do not speak for the UN but report their findings to it.

“These interventions exclusively target LGBT persons with the specific aim of interfering in their personal integrity and autonomy because their sexual orientation or gender identity do not fall under what is perceived by certain persons as a desirable norm,” said Madrigal-Borloz.

“They are inherently degrading and discriminatory and rooted in the belief that LGBT persons are somehow inferior, and that they must at any cost modify their orientation or identity to remedy that supposed inferiority.”

His report to the Human Rights Council contained evidence from 130 submissions.

These said conversions had been attempted through beatings, rape, electrocution, forced medication, confinement, forced nudity, verbal humiliation and other acts of physical, psychological, and sexual abuse.

“Such practices constitute an egregious violation of rights to bodily autonomy, health, and free expression of one’s sexual orientation and gender identity,” he said.

“Ultimately, when conducted forcibly, they also represent a breach to the prohibition of torture and ill-treatment,” he added.

In March 2018, the European parliament passed a resolution condemning conversion therapy and urging member states to ban it.

In March this year, the Canadian government announced a bill to ban conversion therapy.

According to a recent official survey, 47,000 Canadian men who identify as part of a minority sexuality group had been subjected to conversion therapy.

IATF to tackle proposed deferment of classes in public schools