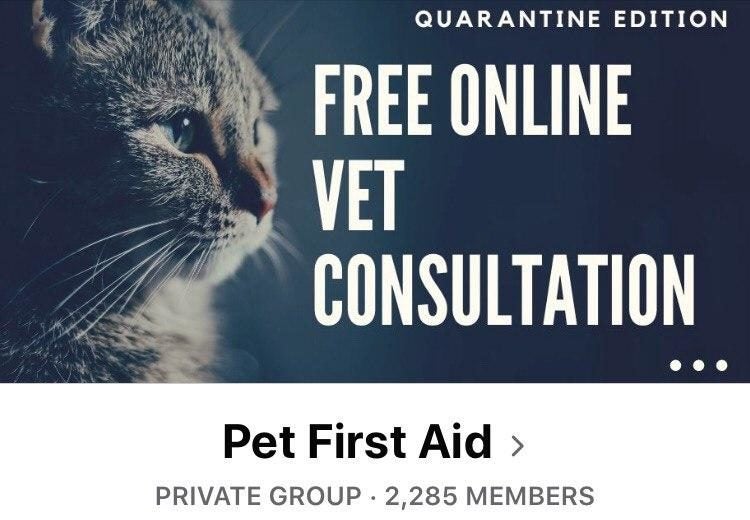 ONLINE HELP DESK Initially set up for some workshops on animal health-related issues, the Pet First Aid FB page has become a site where one can get professional advice for their sick pets. —PHOTOGRAB FROM PET FIRST AID FB PAGE

With few veterinary clinics open amid the Luzon-wide lockdown, a growing community of animal lovers has found an expert voice online to help them cope with their pets’ health-related woes.

When veterinarian Cissy Ramos of Vets in Practice realized how many pet parents were stressing about the health and wellbeing of their pets during the enhanced community quarantine, she thought of putting up the “Pet First Aid” Facebook group to provide free online vet consultation.

“I had time on my hands given the stay-at-home rule and thought it better to ease other people’s concerns despite the limited interaction through Facebook,” she said.

With the help of her fellow veterinarians Karina Bernert and Harick Cuenca, Ramos has been answering queries from worried pet owners who cannot step out of their houses to consult a doctor. Since it was created on March 18, the page has attracted more than 2,000 members, keeping Ramos and her team busy.

“The group only started last week, but inquiries have been pouring in,” she said. “We’ve had to limit membership and posting though, because some people keep on replying with dangerous home remedies.”

On average, Ramos said they receive 15 messages and 20 posts on the group page daily.

Diarrhea, vomiting and skin issues were the most common health concerns among pet owners, she added.

Some of the more serious cases were dogs having seizures or going into labor. Ramos said she had recommended that the pets be taken to the nearest veterinary clinic.

“We usually take a history of the pets so we get a clearer picture of what may be causing the problems but I always express that since we have limited interaction with the pets, our medical advice may be limited as well. We do not give out prescriptions online,” she said.

According to her, the group was initially created for some workshops on pet nutrition and first aid that were scheduled before the quarantine and eventually canceled.

A 2016 graduate of veterinary medicine from De La Salle Araneta University, Ramos said she was offering free consultation as her way of being more productive and helpful to the community during the quarantine.

“I’ve been reading about so many people doing volunteer work and I figured that this is the only way I could help while at home,” she said.

The doctor is a proud pet owner herself. She has four shih tzus, a siamese cat, six rescue cats and an adopted red-eared slider turtle.

Ramos and her sister Teena also recognized that pet establishments would have little to no income during this time so they created a map of vet clinics and pet supply shops that remain open. “We’ve been able to populate it with the contributions of many. For some of the entries there, we called or messaged directly to confirm,” Ramos said.

Despite the limited resources for their pets at home, Ramos advised owners not to panic during the lockdown.

“If they have concerns, they may contact us or access the map of veterinary clinics open for emergencies,” she said. “I am praying that this pandemic will end soon.”