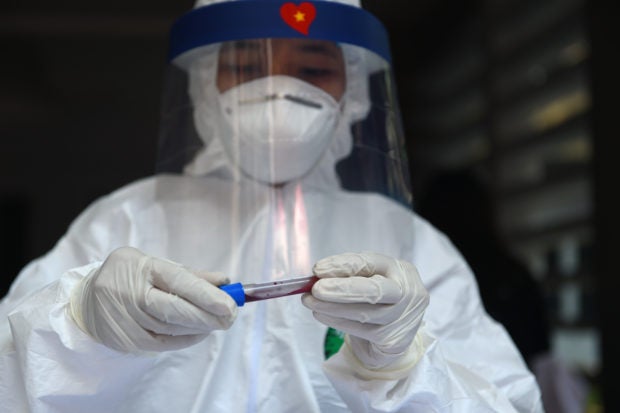 A health worker holds a blood sample taken to test for the COVID-19 coronavirus at a testing center in Hanoi on July 30, 2020. – Until the weekend it appeared that Vietnam had managed to stub out the virus — and with lockdowns lifted since late April, domestic tourists had flocked back to the coastal city of Danang. But fresh restrictions on movement, including stopping buses and taxis within the city, were announced following the discovery of Vietnam’s first locally transmitted COVID-19 infection in nearly 100 days. (Photo by Nhac NGUYEN / AFP)

HANOI — More than 21,000 people in the Vietnamese capital Hanoi have been ordered to take a coronavirus test, authorities said Thursday, as they scrambled to contain the nation’s first outbreak after three virus-free months.

At the weekend, a man in the coastal city of Danang tested positive for COVID-19. This was the first community transmission the country had detected since April.

Since then, more than 40 new infections have been found, spreading out from popular tourist destination Danang to neighboring provinces and other, farther-flung cities.

The health ministry has urged everyone who visited the seaside city in July to come forward. In Hanoi, 600 kilometers (370 miles) north of Danang, authorities have detected two new cases so far.

“People should be actively contacting local health authorities for the tests,” he said, adding that officials will try to complete testing by Saturday.

Hanoi’s bars have been closed since Wednesday, while fairs and festivals were suspended.

At a clinic in the capital on Thursday, medical workers in protective suits took blood samples and mouth swabs at a makeshift rapid-testing center.

Le Van Hieu, who visited Danang three weeks ago for a short holiday, said he has had no cough or fever since he’s been back, but still turned up at the test site.

“Organising rapid testing is good for the community in order to prevent the virus from spreading,” he told AFP.

Most of the new infections are linked to three Danang hospitals, now placed under lockdown.

All flights in and out of Danang and public transport within the city have been suspended, and the majority of its 1.1 million inhabitants have been advised to remain at home.

The swift halt to movement comes after Danang has enjoyed weeks of local tourists returning, especially after Vietnam lifted nationwide restrictions in April.

The communist state has won praise for its handling of the virus, reporting just 464 infections in total, including those from the new wave, and no deaths despite sharing a long, ungovernable border with China.