WASHINGTON — US President Donald Trump “does read” intelligence briefs, the White House said Tuesday in response to backlash over his professed ignorance of an alleged Russian program to pay the Taliban bounties for killing US troops. 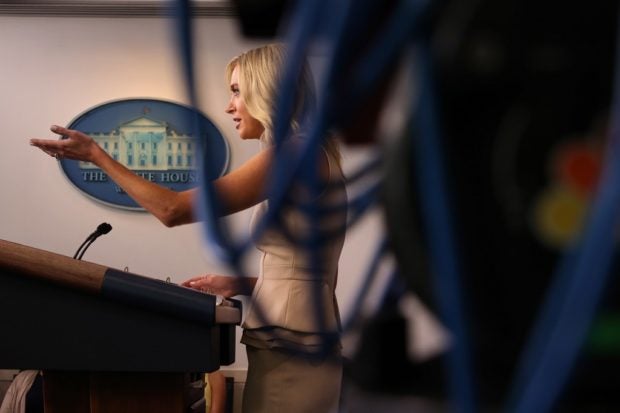 White House Press Secretary Kayleigh McEnany talks to reporters during a news conference in the Brady Press Briefing Room June 30, 2020 in Washington, DC. McEnany continued her pointed criticism of The New York Times’ reporting that the Trump Administration failed to organize a response to an alleged plot by a Russian military intelligence unit to pay bounties to Taliban-linked militants to kill U.S. and coalition troops in Afghanistan. Chip Somodevilla/Getty Images/AFP

The New York Times, citing two unnamed officials, reported the president had received a written briefing about the bounties at the end of February, undercutting his assertion that he was not told of the threat.

Democrats demanded more information from intelligence officials earlier Tuesday, as questions have been raised about Trump’s degree of involvement with sensitive files and the attention he pays to the confidential documents sent to him.

“He is constantly being informed and briefed on intelligence matters.

“The president is the most informed person on planet Earth when it comes to the threats that we face,” she added.

The White House said Monday the claim had been kept from Trump because the intelligence underpinning it was unverified.

Democrats asked John Ratcliffe, the director of national intelligence, and CIA director Gina Haspel to provide more information and to explain why Congress had not been briefed on the issue.

“We need to know whether or not President Trump was told this information, and if so, when,” Senate Minority Leader Chuck Schumer said Monday.

With Trump, “all roads lead to Putin,” said Nancy Pelosi, the speaker of the House of Representatives.

Suspicion towards the president stems from his campaign trail promise to improve relations with Russian President Vladimir Putin, as well as from suspected collusion between the Kremlin and Trump’s election team that has occupied attention for most of his term.